A Fresh Look At: God Grew Tired of Us 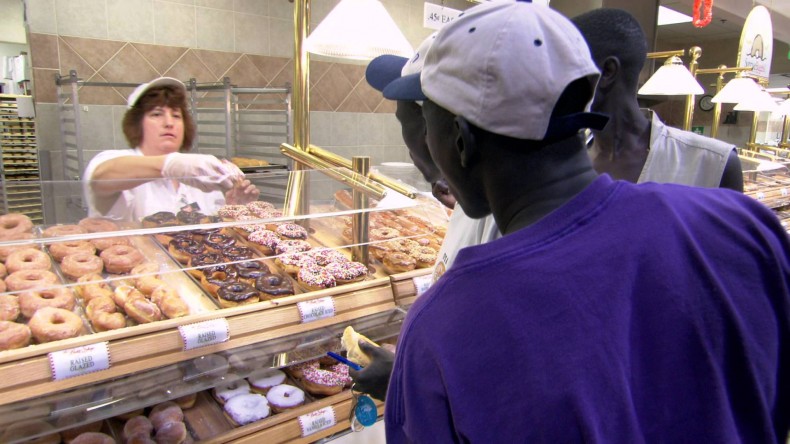 Janneke grew tired of “God Grew Tired of Us.”

I have reviewed several documentaries in the past and have talked about some of the difficulties of reviewing them. How does one deal with the fact that the documentary has a message, sometimes an objectionable one, and that its purpose is partly to spread that message? Is it reasonable to critique a message along with critiquing the more objective film-making techniques? If a film argues its point well, but is still spreading a morally objectionable message, should it be considered a lesser film because of it?

In the case of “God Grew Tired of Us,” these are valid questions to ask, but there are more. “God Grew Tired of Us” tells the story of three Sudanese refugees – John Dau, Daniel Abu Pach, and Panther Bior – as they come to the United States. It follows them from just before they leave a refugee camp in Kenya to three years after their arrival in the US. Along the way, it documents their initial struggles with technology, their prolonged struggles getting jobs and education, and their search for their families.

On a technical level, there is nothing particularly wrong with “God Grew Tired of Us.” Sometimes the editing makes the timeline difficult to follow, and jumping from person to person and location to location can sometimes be unclear. The initial narration and establishment of the boys’ stories is well-done and quickly leads one into the new story of their adjustment to America. These aspects are not the problem of “God Grew Tired of Us.”

The problem with “God Grew Tired of Us” is that it’s a shallow film. It’s a film that wants to tell these boys’ – and, by extension, the story of the genocide in Sudan – stories, but in a way that is palatable to a viewer who knows nothing about the war and who, indeed, wants to know nothing. Refugee camps are presented in such a way that the impression one can’t help but get is that the tragedy is not that the people are displaced, but rather that they don’t have access to a shower. Even the mention of one boy’s relative dying in a Ugandan refugee camp is brushed over, as though true horrors ought not to be mentioned and the reasons why people are dying in the camp are irrelevant. More time in the film is devoted to the boys struggling to understand escalators and light switches than to more emotional and meaty aspects of being a refugee. The image that the film presents is that the greatest problem in Sudan is not genocide or displacement, but that people don’t know what a cucumber is.

To be clear, it is not this reviewer’s opinion that struggles with technology should be excluded from the film. They are relevant to these men’s experiences as they came to America. However, the amount of time and analysis devoted to this aspect that the men mastered quickly relative to the amount of time spent on other aspects is baffling. More than that, it comes off as catering to those who see Africa as an entirely technologically backwards place, and seems to be saying “We need to rescue Africans from themselves so they can enjoy cable TV.” Even if it doesn’t necessarily pass judgement itself, it encourages that judgement by catering to the stereotypes that are commonly held in the US about Africa.

This, of course, raises the question. Is it valid to critique this film for not doing what I feel it ought to be doing, and not doing something which it didn’t necessarily set out to do? “God Grew Tired of Us” set out to tell the story of these three refugees, and it more or less does that. It doesn’t do so with tact or with an eye on greater context, but it does it. Shouldn’t that count for something?

There is something to be said for the fact that this film exists. Telling the story of refugees from any conflict is valuable and shares not only why it’s important to help in these conflicts, but also why there is conflict and what it does to the people involved. It ought to be appreciated that this film takes the time to share something about the conflict in Sudan, however shallow the story it tells might be. The trouble with this film is that the story it tells is filtered through the lens of someone who isn’t necessarily approaching Sudan objectively. The trouble is that the filmmakers seem to have the view that Africa is a backwards place that needs to be rescued.

The problem might best be summed up by looking at the summary of the film listed when one googles it. The Google summary says that the refugees “try to come to terms with the horrors they experienced in their homeland, while adjusting to their new lives in the United States.” This is a fair summary of the film, but it ignores the fact that the men are, at many points, nostalgic for the refugee camps. They recognise and appreciate that America is a good place to be, but they miss their live. The film brushes over the fact that the continue to listen to Sudanese music, eat Sudanese food, and be Sudanese, preferring instead to list their experiences in Sudan as “horrors” and “ordeals.” To be clear, this is not to say that life in a Kenyan refugee camp was all smiles and roses. However, neither should words be put into these refugees’ mouths. They make it clear that there are things to miss in Africa. The joy one man seems to have at the idea of going back ought to make that clear enough.

If one critiques “God Grew Tired of Us” based on its own goals, then it is a decent film. It more or less tells the story of these refugees and their struggles, especially in the US. However, one can’t critique a documentary without also critiquing the message it’s attempting to send. In this case, it’s trying to send the message that things in Africa are miserable and terrible, and that America must rescue Africans from themselves. While it does tell the story of three refugees, it does so with no nuance or even acknowledgement of their own thoughts.

“God Grew Tired of Us” is not a morally terrible film. Any film that at least acknowledges the struggles of refugees and the problems of refugee camps must be applauded for bringing this back into the public eye. However, there is a problem when doing so is at the expense of those it’s purporting to represent. “God Grew Tired of Us” is the American perspective on an African story, and the problems with that perspective radiate out of every shot.

Janneke Parrish lives in South Korea where she struggles to order pizzas and consoles herself by watching far too many movies.
You might also like
nicole kidman

END_OF_DOCUMENT_TOKEN_TO_BE_REPLACED
Taylor Sinople Picks: The 16 Best Films of 2016
Form and Function in Alex Ross Perry’s “Queen of Earth&...
Digging for Fire and Unexpected: Husband and Wife Process Parenthoo...
Every Thing Will Be Fine 3D Review