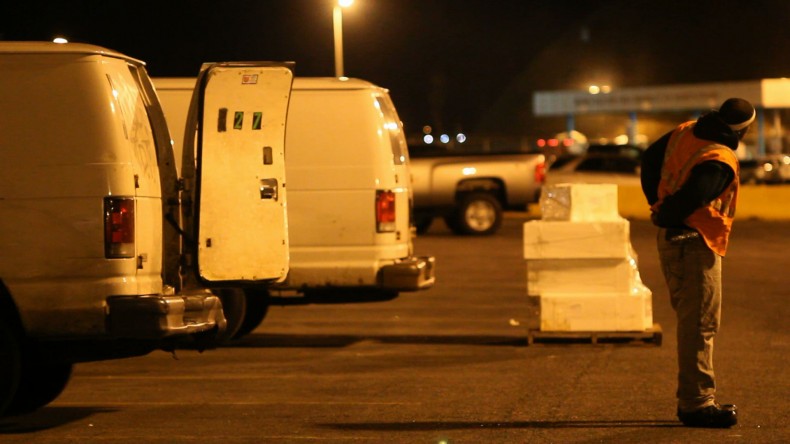 “Bx46” is beautifully filmed and features hilarious and fascinating interviews with some of New York’s Fulton Fish Market employees, even though it sometimes has trouble establishing a consistent rhythm.

In the northern area of the Bronx, a section known as Hunts’ Point, the Fulton Fish Market and its surrounding industrial areas employs hundreds of men to cut, clean, and ship fish to markets around the city. Next door, the Department of Sanitation handles the city’s waste, while a nearby jail houses prisoners who are sent there when the cells at Riker’s Island are full. All of this right off the 6 train and the Bx46 bus.

Directed by Jeremie Brugidou and Fabien Clouette, two French film students who became fascinated by the Fulton Fish Market after visiting New York City, Bx46 is a beautifully filmed documentary that functions as both a piece of experimental video art, and a relatively straightforward narrative about adjusting to the new Fulton Fish Market (the market relocated in 2005 as a result of spatial and sanitation concerns) nearly 10 years after the move. Interviews are conducted with the market’s employees, some of whom have worked in the factory for over 40 years.

We hear anecdotes about the market and meet a host of compelling personalities, all while being treated to some fascinatingly offbeat cinematography and editing that gives the film a unique and compelling rhythm. Most of it works fairly well, but Bx46 does have a tendency to seem a little unsure of what exactly it wants to be, as it often alternates between two different kinds of cinematic language. At its most coherent, Bx46 is a curiously offbeat documentary. At its least, the film is a moderately coherent art installation. Neither is thematically or emotionally satisfying enough to justify a feature-length runtime, and the film often struggles to find a balance between the two sensibilities.

Unlike other digital documentaries of the same ilk, Brugidou and Clouette don’t treat their subjects as components of the framework. They aren’t objects to be toyed with and edited around as a kind of aesthetic experience. Bx46 is very much a documentary and, mostly, develops its subjects and portrays them as the human beings that they are, rich with experience and stories to share. However, as has been pointed out before, the film sometimes feels like it’s running with two totally different fundamental ideologies as to how the material should be presented, and it can be difficult as a viewer to settle into a rhythm when the film itself can’t seem to.

Overall, though, Bx46 is a wholly enjoyable experience, one that successfully avoids nearly every single New York movie cliché in the book. The film is entirely absent of the seemingly obligatory skyline shots. In fact, the only time we even catch a glimpse of Manhattan is when someone points at an outline of Central Park on their cellphone. Watching the film, it’s sometimes hard to believe that this is, in fact, a part of New York City, and Bx46 knowingly takes this opportunity to present a side of New York that really hasn’t been presented before, and especially not with the aesthetics present throughout. The Fulton Fish Market isn’t exactly what one would call a tourist attraction, but after watching Bx46, I couldn’t help but want to hop on the train and see it for myself.

END_OF_DOCUMENT_TOKEN_TO_BE_REPLACED
Taylor Sinople Picks: The 16 Best Films of 2016
Form and Function in Alex Ross Perry’s “Queen of Earth&...
Digging for Fire and Unexpected: Husband and Wife Process Parenthoo...
Every Thing Will Be Fine 3D Review