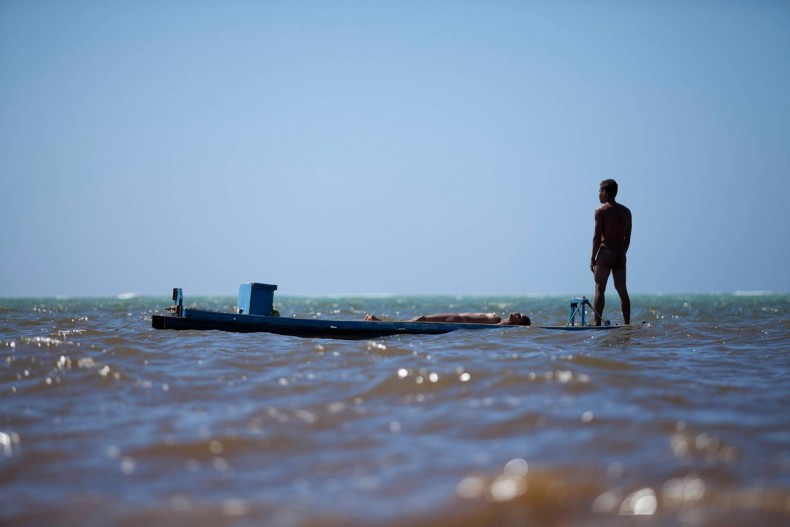 “August Winds” is, at its best, an original and unflinching look at a small Brazilian community, but it’s also slow, bleak, and occasionally aimless in its pursuits.

Gabriel Mascaro’s August Winds, the first feature narrative from the Brazilian documentarian who previously edited a covert doc about domestic housemaids, tells of two young lovers who struggle to connect when a foreign researcher is killed while studying the weather patterns of their small community. Shirley (Dandara de Morais), doesn’t take much of an interest in the man’s death, but Jeison (Geová Manoel Dos Santos) begins retreating from his normal life as he tends to the rotting corpse, cleaning and supervising it when he should be working with his father or at the local coconut farm, where he and Shirley conduct regular trysts while delivering their take to a purveyor in the next town.

August Winds plays like many of the other, recent international art-house travelogues that have been traveling stateside at festivals across the country. Inexpensive digital filmmaking seems to have made room for young, independent filmmakers who wish to expose a group of people or a way of life that isn’t often seen on the big screen. It’s obvious that Mascaro’s intentions are good. The community portrayed in August Winds is unique and fascinating. But, like Rolf de Heer’s Charlie’s Country (which also played at this year’s First Look festival), the film tends to rely too much on a meandering sense of self-pity that’s neither compelling nor appealing.

There is some attempt to normalize the lifestyle portrayed in the film, but August Winds is ultimately too cryptic to make much of a lasting impact, and its unceasingly bleak outlook develops without much punctuation or direction. Mascaro is simply saying that life, lived with or without glory, is absolutely pointless, and any attempt to alter the course of the universe is completely futile and should not be attempted under any circumstance.

One of the film’s major subplots involves Jeison compulsively taking care of the corpse instead of helping his father build a wall to protect his home from flooding. In the end, Jeison builds a similar wall for the community’s small, insignificant cemetery, only to watch the waves overpower his efforts. This illustration of the film’s themes is probably the only one in the entire movie that’s successful, and it stands head and shoulders above the rest of August Winds as the most compelling aspect of the film.

Unfortunately, Jeison is characterized entirely by his endeavors, and any moment in the film where he isn’t tending to the body in some way feels dull and underdeveloped. Alternately, Shirley is a far more interesting character than Jeison, but her comparative screen time is far less than that of her co-star, and the film misses a huge opportunity to take advantage of de Morais’ superior performance.

August Winds, in all of its visual and sonic beauty, is never quite as groundbreaking as it wants to be. Its relatively frank depiction of intimacy is refreshing, and brief bursts of idiosyncratic brilliance make their way on-screen from time to time, but the film never rises above its languid pace or unnecessary bleakness. There’s nothing wrong with making a film as hopeless as this, and many American filmmakers could take a note or two from Mascaro’s commitment to tone, but he appears to enjoy punishing his audience for seeking out his movie, only to conclude with the idea that everything he’s just presented is as pointless and inconsequential as life itself.

END_OF_DOCUMENT_TOKEN_TO_BE_REPLACED
Taylor Sinople Picks: The 16 Best Films of 2016
Form and Function in Alex Ross Perry’s “Queen of Earth&...
Digging for Fire and Unexpected: Husband and Wife Process Parenthoo...
Every Thing Will Be Fine 3D Review