“Enter the Dangerous Mind” & “The Voices:” A Double Feature of Schizophrenic Psycho Killers 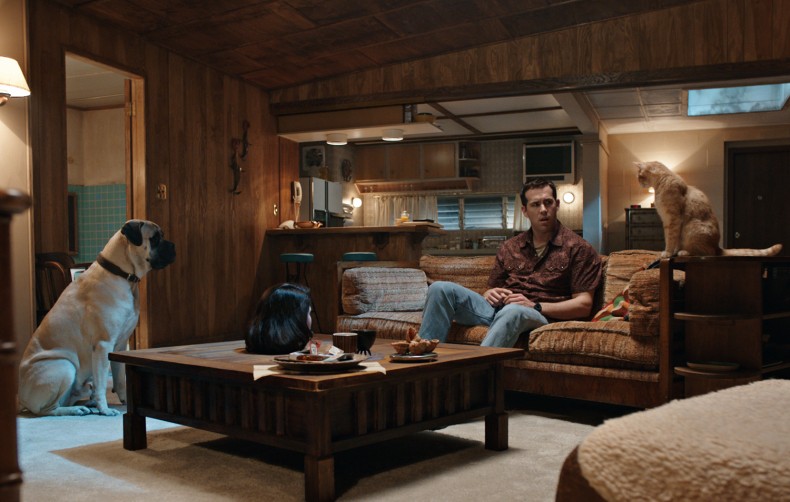 Once or twice a year, sometimes more if the heavens are smiling down on us, a film critic will see a movie, leave the theater, and ask him or herself one very important question. And no, it is not the commonly posited, “what else could that money have gone to?” because films create jobs, and it’s unfair to believe that, because a movie is bad, the people who worked on it shouldn’t be compensated. No, instead, the question that’s asked is this: What other movie could have been made instead?

Starring Jake Hoffman, son of Dustin, as Jim, a mild-mannered EDM producer who takes medication to curb the symptoms of his schizophrenia, Enter the Dangerous Mind makes the even more dangerous assumption that dubstep, schizophrenia, and a title like Enter the Dangerous Mind* would give potential viewers any reassurance regarding the directors’ abilities to tackle such a complicated and sensitive subject.

Followed around and heckled by the physical embodiment of the LA douchebag-sidekick trope, Jake (Thomas Dekker), Jim is compelled to ask out Wendy (Nikki Reed), a beautiful woman who works at the social workers’ office where Jim occasionally does some IT work for Kevin (Scott Bakula) and his employees. Jake, who apparently has no job or purpose other than to bully Jim into being confident – don’t worry, it makes sense later on but the execution of the idea has absolutely no subtlety to it; in fact, anyone with half a mind (even a dangerous one) could figure this movie out in about 15 minutes – tries to teach Jake how to flirt successfully in preparation for his date with Nikki.

After wowing a crowd of EDM fans at a party and prematurely ejaculating in his pants, Jim decides to call it a night and goes home to Jake who, like a worried mother with tourette’s, berates Jim for the incident mercilessly. Jim is pushed to the brink of sanity, and has a mental breakdown that leads him on, get this, a murderous rampage against Wendy and all of her friends. Yeah, this is what we’re dealing with here.

To put it lightly, EDM is the Springtime for Hitler of mental illness thrillers. Running 88 minutes too long at 88 minutes, EDM bashes its viewer over the head with an overabundance of semi-stylish montages set to trashy dubstep music, attempting to comprehend Jim’s thoughts without ever bothering to understand, justify, or explain them to the viewer in any way. Much like Jim himself, EDM is trapped in a purgatorial state of utter incomprehension.

At one point during their date, Jim tells Wendy that a perfect EDM song feels like silence to him. For me, there reached a point in EDM where all the fast cuts, bass drops, and frame manipulation also became its own form of silence. Nobody can make the claim that this movie is boring, but it is unbearably awful, almost to the point of possibly causing schizophrenia instead of actually examining it.

Jake Hoffman does what he can with the material, and he’s done a lot better work in a lot of other better movies, but I did appreciate how accurately he portrayed the awkward, meek aspects of his characters. Often, actors who take on these roles tend to come off as exactly what they are: hugely confident movie stars trying to seem awkward by essentially mocking people with anxiety disorders. However, Hoffman, either because he was actually uncomfortable with being in this movie or because he’s a good actor (probably both), really nails this facet of Jim through and through. However, when it comes time for Jim to go full Michael Myers, the performance – and the movie – just fall apart.

The same could be said for Nikki Reed who, like the rest of her Twilight co-stars, has done an admirable job at not going for the easy rom-coms that end up getting lost somewhere in the Netflix shuffle. If her films fail, they feel because they’re at least trying to do something different, and EDM is no exception. Reed does turn in a good performance – hell, she’s probably the best thing about this movie – but she just isn’t given enough to do, and it’s a shame to see her working on stuff like this when, with a great director, she could be magnificent.

Sure to be mocked and analyzed for years to come on podcasts and TV shows dedicated to honoring bad films, EDM is one of the rare cases when an all around terrible film isn’t even worth watching ironically. It’s not even that Delara and Teran introduce a group of characters late in the third act as nothing more than living breathing beings to be murdered. And it’s not the fact that the exact same police officers who question Jim earlier in the film are the ones who find Kevin searching for evidence regarding a crime Jim may or may not have committed during the film’s dopey climax. And, to really show how forgiving I can be, it’s not even the fact that a group of individuals thought it might be a good idea to cast Noel Gugliemi as an LA detective.

No, I hated this movie simply because I learned nothing from watching this film and actually may be stupider for enduring it. Watching this movie is an insult to all intelligent life forms, and fathoming the process that went into creating it is beyond the scope of my comprehension. I hate knowing that I live in a world where this film exists. So, to answer the question from before, regarding what other movie could have been made instead of this, in the case of Youssef Delara and Victor Teran’s insulting, sadistic, and pointless Enter the Dangerous Mind, the answer is any movie at all.

* At some point I thought this film would turn into a kung-fu extravaganza starring Michelle Pfeiffer. By the time this film was over I convinced myself that I had watched that movie instead of this one.

In this weekend’s other offering of schizophrenic psycho killers, The Voices stars Ryan Reynolds as Jerry, a quiet and likable employee at a small-town toilet factory. Jerry seems to be on good enough terms with all of his co-workers, but some court mandated therapy with Dr. Warren (Jacki Weaver) and a pair of talking pets gives us the idea that Jerry isn’t exactly who we think he is.

However, a new employee, Fiona (Gemma Arterton), has completely stolen Jerry’s heart. Oblivious to the other office hottie, Lisa (Anna Kendrick), who is blatantly throwing herself at him, he convinces Fiona to go out on a date with him. Jerry is sure that all of his problems will soon be coming to an end. But Fiona has no intention of seeing Jerry romantically, and so she stands him up. But as fate would have it, Jerry is exactly where he needs to be after Fiona’s car won’t start and she needs a ride home. Expecting to get a burger with him before going home, Fiona ends up dead in a forest, her body cut up into little pieces while her head rests peacefully in Jerry’s fridge.

Shocked by his own actions, Jerry’s schizophrenic tendencies get a hold of him when, in the form of his cat and dog, the conflicting voices begin advising Jerry on what to do next. Meanwhile, Fiona’s decapitated head is telling Jerry that she’s lonely, and would like a friend to play with while she sits in his fridge. Jerry sets his sights on Lisa, who might just be the key to Jerry’s happiness, not his next victim.

Where Enter the Dangerous Mind is self-serious and stupid, The Voices is hilarious and effective. Where EDM is mildly off-putting, The Voices is unbearably disturbing. It is, in essence, structurally identical to its dubstep-laden counterpart, but it tends to know exactly what it is, what it wants to do, and how it’s going to get there. Doing some of the finest work of his career, Ryan Reynolds proves once again that he is one of Hollywood’s most undervalued actors, and his work in The Voices will surely be a go-to example when proving how capable the former Van Wilder really is.

Gemma Arterton and Anna Kendrick also turn in a pair of entertaining performances as Jerry’s two major love interests. Arterton’s fish-out-of-water character is fun to watch, especially after her untimely death, but Anna Kendrick is, as usual, a complete delight, working to her girl-next-door strengths in another of her recent horror-comedy roles. Admittedly, Kendrick has become typecast as the “girl who you realize is the perfect girl but are too busy being distracted by the other girl” girl, but her presence is always welcome, and director Marjane Satrapi – of Persepolis and Chicken with Plums – cleverly dispels the usual function of her character in a turn of events late in the second act that is as wholly unsettling as it is shocking.

Sam Spruell and producer Adi Shankar show up in hilarious extended cameos that keep the workplace scenes funny and, in the case of an odd discussion regarding the art of sushi, occasionally surreal. However, The Voices does sometimes struggle to find a tonal balance, flip-flopping between comedy, drama, and horror a little too clunkily for it to be totally effective. It’s not that any individual scene is done poorly – even the flashbacks feel well-placed and integral to Jerry’s character – but, when edited together, The Voices has trouble transitioning into the next genre it wants to tackle, to the point where Satrapi almost audibly just says, “screw it” and ends the film with a really bizarre song-and-dance sequence.

The Voices will surely live on in midnight movie screenings, house parties, and horror fests for years to come. It is a film of such supreme weirdness that it cannot possibly be ignored. One can only hope that Reynolds will use this film as an opportunity to catapult his career back to where it once was – Lord knows he’s due for a comeback. And if it doesn’t always embrace its potential as an offbeat horror-comedy, The Voices is colorful, violent, and funny enough to keep just about anyone entertained for its entirety. Plus, who doesn’t love talking animal movies?

Bottom Line: Enter the Dangerous Mind is a bad, bad, bad, bad, BAD movie. Please, under any circumstances (unless you want to see how NOT to make a film) do not watch this film.
Rating: 0.5/10

Bottom Line: The Voices is a funny, violent, and deeply disturbing film, bolstered by another excellent Ryan Reynolds performance, but the film sometimes struggles to maintain the balance of humor and its grisly killings.
Rating: 7/10

END_OF_DOCUMENT_TOKEN_TO_BE_REPLACED
Taylor Sinople Picks: The 16 Best Films of 2016
Form and Function in Alex Ross Perry’s “Queen of Earth&...
Digging for Fire and Unexpected: Husband and Wife Process Parenthoo...
Every Thing Will Be Fine 3D Review