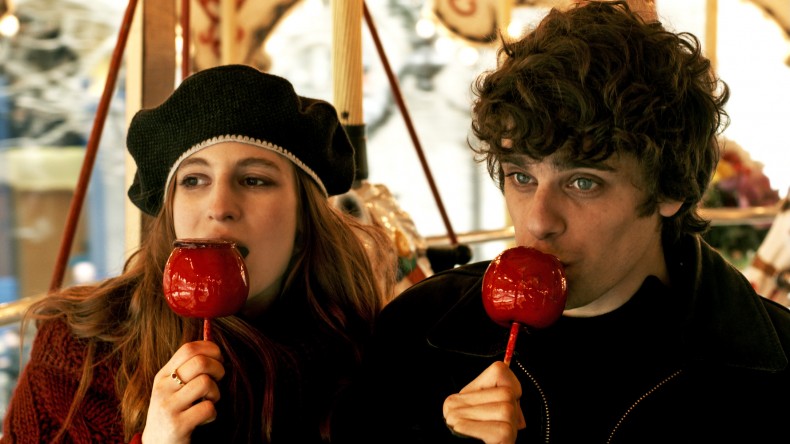 An evil step-parent, a fateful midnight ball, and a big bad wolf all find their place in the fairy-tale inspired French romantic-comedy “Under the Rainbow.”

Indeed, 24-year-old Laura (Agathe Bonitzer) finds herself in a number of familiar situations when she meets Sandro (Arthur Dupont) – a classical musician that she would be happy to call her Prince Charming. When she meets Maxime (Benjamin Biolay), an intimidating and respected music critic, Laura’s drawn away from her prince and into the arms of the wolf. Meanwhile, three pairs of adults related to Laura or Sandro find themselves affected in different ways by this magical romance.

Agnès Jaoui (who wrote, directed, and stars) and Jean-Pierre Bacri (who wrote and stars) team up again after a successful partnership that includes 2000’s “The Taste of Others” and 2008’s “Let’s Talk About the Rain.” Their new adaptation of classic fairy tales brings up a lot of intriguing scenarios. What would Cinderella’s magical night at the ball be like in the real world? Rather than embrace these famed folk tales at a deeper level, Jaoui allows them to serve only as quick one-liners. The surrounding film is so focused on advancing all of its subplots equally that it fails to establish what the story is even really about, who the main character is, who we should side with.

I wonder whether a French romance of this type is doomed from the start in the still-lingering wake of “Amelie.” Magical realism in “Under the Rainbow” lacks panache, and the presentation of the unfolding romance goes without a much-needed spark. Instead, occasional bouts of dry, British humor make up the most enjoyable scenes.

After introducing the film with a structure that works – a compelling central love affair and the people affected by it – Jaoui goes on to tell a less satisfying story mostly about the 7 (!) adults featured in the film. It’s too many, Jaoui doesn’t follow the chemistry! The definition of cinematic captivation is being lead into a story that you want to follow. Here, the story you want to follow is established early on, but is left behind during frequent tangents that leave you saying “No, wait! You’re turning the wrong way, get back to the good stuff!” The constant interplay between the less-alluring adult characters stop the romantic, fantastical tone in its tracks, never to be found again.

Still, “Under the Rainbow” is not without its charms. Classical music is nicely used to score the early scenes of passion – only to become even more relevant at the realization that Sandro is a classic musician. Likewise, artful transitions in which distorted, blurred images sharpen into real ones are a thoughtful touch.

Jean-Pierre Bacri (who plays Sandro’s cold, distant father) has a handful of fantastic scenes in which he teaches Laura’s aunt (played by Jaoui) to drive. Bacri is obsessed with an upcoming date upon which it was prophesized he would die. His on-edge personality paired with Jaoui’s helpless, blissfully ignorant character makes for a great could-have-been comedy film that’s sadly buried inside the over-reaching larger one. Agathe Bonitzer’s leading character Laura has the natural beauty and quiet flirtation of Marketa Irglova (“Once”), but isn’t used to the right ends. Her confliction over the boy (Sandro) and the man (Maxime) takes too long to get moving and becomes completely unremarkable.

It was frustrating to watch all of these semi-working components fail to interact with each other in any memorable way. Failing to use the fairy tale spin as anything deeper than a gimmick, “Under the Rainbow” comes up short on its unique angle.

Taylor is a Chicago-based writer and aspiring film historian. He is the editor here at TFP, and has contributed to a number of international publications such as Cinema Scandinavia, PopMatters, and Room 101 Magazine. He can also be found listening to podcasts, researching topics he has little use for, or running after a city bus.
You might also like
ciffRomance