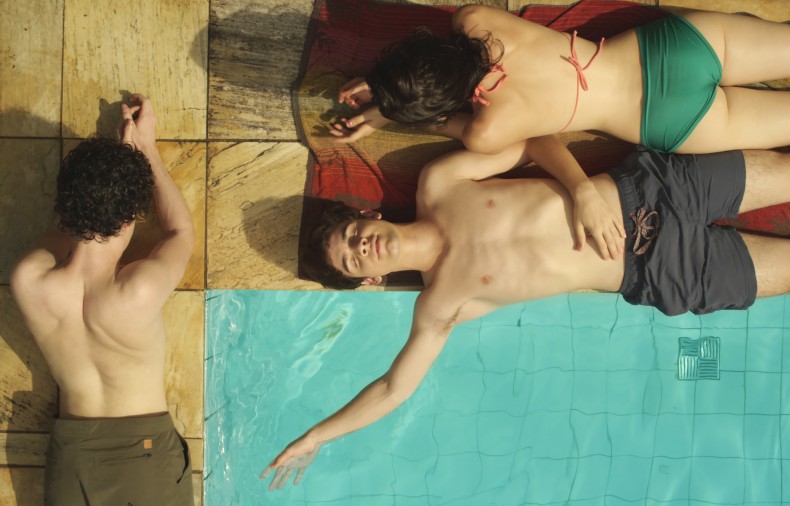 “The Way He Looks” is a romantic drama loaded with a few hot button issues, but writer-director Daniel Ribeiro treats them with such normalcy and respect that they’re hardly visible as deviations to any coming of age story of young love. Leonardo’s blindness (as performed effortlessly by Lobo) is used in such a matter-of-fact way that Ribeiro is able to very easily get away with playing it for laughs without ever offending. Leonardo gets in little quips where he can – especially when it comes to his parents who at one point reprimand him for coming home after dark, to which Leo shrugs, “It’s always dark for me!”

And Ribeiro is so delicate with Leonardo’s evolving interest of Gabriel from a friend to something more that the evolution is nearly imperceptible. It helps that Lobo and Audi have so much chemistry together – something they may have developed while shooting the 17-minute short film version of this story in 2010. There’s no single “awakening” moment, instead Leonardo’s attraction to Gabriel is natural and honest and it’s a wonderfully human treatment of the material that filmmakers working in all shades of the sexuality spectrum could learn a lot from.

An early scene that depicts Leonardo being bullied at school is a little on-the-nose, but when it counts, “The Way He Looks” wins out with subtlety and plain old swooning, soaring romance. Indie and classical tracks from The National, Belle and Sebastian, and Arvo Pärt act as both the film’s score and the soundtrack to Leonardo’s life.

Taylor is a Chicago-based writer and aspiring film historian. He is the editor here at TFP, and has contributed to a number of international publications such as Cinema Scandinavia, PopMatters, and Room 101 Magazine. He can also be found listening to podcasts, researching topics he has little use for, or running after a city bus.
You might also like
The Way He Looks

END_OF_DOCUMENT_TOKEN_TO_BE_REPLACED
Taylor Sinople Picks: The 16 Best Films of 2016
Form and Function in Alex Ross Perry’s “Queen of Earth&...
Digging for Fire and Unexpected: Husband and Wife Process Parenthoo...
Every Thing Will Be Fine 3D Review