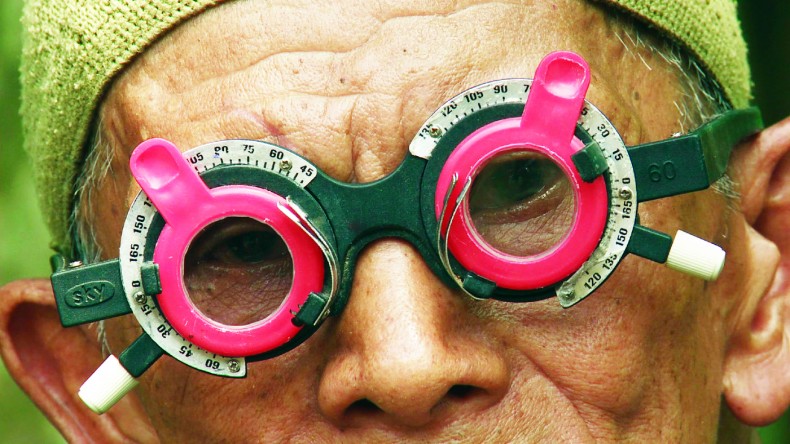 In 1965, the Indonesian army overthrew the government and murdered more than one million people deemed “communists.” The perpetrators of those crimes are, to this day, in power and seen as heroes. Joshua Oppenheimer’s “The Act of Killing,” one of the most important documentaries of our time, challenged those perpetrators to reenact their executions and exposed a lack of remorse and regret that, terrifyingly, captured the human capacity for evil.

“The Look of Silence” is a companion film to “The Act of Killing” that this time gives a face and a voice to the victims of those 1965 crimes. There is no clear chronology presented between the two films, they inform one another and should be viewed together as a singular piece.  In “Silence,” Oppenheimer follows a man named Adi as he searches for answers from the men that killed his brother 50 years ago and are profiting socially and financially from it to this day.

This second film on the subject from Oppenheimer is more focused than “The Act of Killing,” and while it doesn’t have anything like the visceral ending to that 2012 documentary it does actually get closer to understanding the flaws in humanity that allowed this to happen. This is because Adi interviews the men who ended those lives in 1965, but also the men that allowed it to happen without actively participating. That’s where things get scary. Because while there may always be evil men the world, we have a choice to aid them. Adi confronts his uncle, who guarded the prisoners before they were executed, and finds he, like all the others, doesn’t see himself in any way responsible for what happened. So who is? How far does the human compulsion to deflect guilt go?

“The Look of Silence” is another essential work by Oppenheimer, who criminally lost the Oscar for Best Documentary last year but won a far more prestigious MacArthur Fellowship. Adi is very literally putting his life on the line by confronting these men, and he does so in order to, in some small way, show them that their crimes are not going forgotten. Perhaps this year this body of work will get the boost in attention it deserves from the Academy. It is full of absolutely revolting realities and some glimmers of hope, too. Ultimately, Oppenheimer understands that there is no reaching a definitive conclusion to this story. The best he can do is to photograph Adi’s face while he watches footage of his brother’s killers joking and bragging about their crimes. The solemn, silent look of a man witnessing the victors rewrite history.

Taylor is a Chicago-based writer and aspiring film historian. He is the editor here at TFP, and has contributed to a number of international publications such as Cinema Scandinavia, PopMatters, and Room 101 Magazine. He can also be found listening to podcasts, researching topics he has little use for, or running after a city bus.
You might also like
Joshua OppenheimerThe Act of Killing

by Zack Miller on July 20, 2014
Here’s what’s new to Netflix Instant for the week of July 14. Top Picks The Master (2012) Directed by Paul Thomas Anderson Despite there being six years of releases yet to come, “The Master” has already all but guaranteed a spot in my top 10 of this decade. The title is incredibly apt, considering the […]

by Taylor Sinople on January 14, 2014
How do you process atrocities that have been committed without consequence? We have some path to coming to terms with “Shoah” knowing the ultimate defeat of the Nazi regime, but “The Act of Killing” gives us the unsettling experience of getting to know the perpetrators of crimes that will never be paid for. In 1965, […]
comments
Leave a reply
Add Comment Register

END_OF_DOCUMENT_TOKEN_TO_BE_REPLACED
Taylor Sinople Picks: The 16 Best Films of 2016
Form and Function in Alex Ross Perry’s “Queen of Earth&...
Digging for Fire and Unexpected: Husband and Wife Process Parenthoo...
Every Thing Will Be Fine 3D Review