Out-of-work husband and father Craig (Pat Healy) sulks in a bar after being fired on the same day he received an eviction notice. As he shrugs off the cost of a few beers (what’s it matter compared to the $4,500 in unpaid rent?), Craig bumps into Vince (Ethan Embry) – an old high school buddy he hasn’t seen in five years.

After the two catch up on old times, including Vince’s new life as a low-grade criminal, they’re called over by a mysterious man (David Koechner) and his beautiful, young wife (Sara Paxton). The man, named Colin, barely blinks an eye at dropping $300 on a bottle of tequila – it’s his wife’s birthday, and he’s wealthy. The group is downing the expensive booze when Colin offers the reunited friends $50 to the first person to get slapped across the face by someone in the bar. When the fifty dollar bill comes from a thick stack of hundreds, Craig sees an opportunity to make a dent on that rent bill and asks “What else can I do?” As Colin’s humiliating bets escalate, the group heads back to his mansion where the allure of quick cash begins to turn the friends against one another and leads  them to question how much money it would take to cut their own pinky finger off for the rich couple’s bizarre amusement. 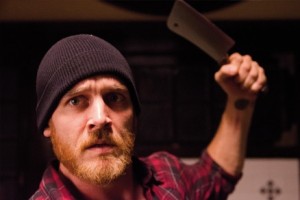 “Cheap Thrills” won an audience choice award at SXSW as well as Best Film in the After Dark category at this year’s ChicagoInternational Film Festival, and it’s an easy win to understand. Writer-director E.L. Katz’s film is a chaotic fever dream of pure insanity that mixes violence, comedy, and testosterone into the perfect midnight movie cocktail. Audience interaction from late night crowds is a fundamental part of enjoying the cringe-inducing portions of “Cheap Thrills” that had the festival audience in Chicago laughing and gasping in turn.

Lead actor Pat Healy (“Compliance”) plays Craig as the believable every-man that gets lost in the desire to keep his family off the streets. David Koechner (“Anchorman”) is thankfully used in a less obnoxious role than usual and actually manages to add some depth to Colin, while co-star Sara Paxton barely says a word yet conveys much more in glances and facial reactions.

This is quick-paced filmmaking from a first time director with a confident vision. The camera’s focus isn’t always dead-on, the movement is a little shaky, but all of this sloppy production work helps the film come alive to the circus nightmare unfolding for Craig and Vince. The film is being talked about in horror circles, but that’s only because there’s not very many other places to put it. It’s not scary, and it’s not about being scary – consider it more of an all-out cult thriller that’s looking for nothing more than to give you a great time while underscoring the ride with themes of economic depression and the growing extremity of reality television. “Cheap Thrills” is 85 quick minutes of deranged escapism.

Selections from the post-screening Q&A with Pat Healy 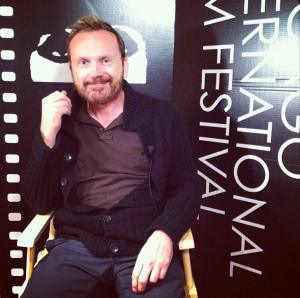 Q: It was never mentioned how David Koechner’s character had all this money, was there ever a version of the script that had that or was it always intentional?

A: No, not in any drafts that I read.  It became different when David came on board, but it was written as a sort of rich trust-fund kid.

Q: Did you guys shoot this chronologically? I can’t imagine it working any other way.

A: Yeah, we shot all the stuff in the beginning and the end first. So I kind of knew where I started and where I had to get to. We shot everything in the house in chronological order over 11 days last September when it was 100 degrees outside in L.A. and it was about 120 degrees inside the house – no air conditioning – and it was just brutal. It helps a lot to shoot it in sequence, you don’t always do that.

Q: Your character goes through just about every emotion on the map, was this the toughest and most satisfying acting exercise that you’ve ever done?

A: Yeah, you said it, the toughest and most satisfying, yeah. It’s rare that you get an entire career where you get to play all of these things [emotions], let alone in one role. It was extremely difficult, Ethan and I famously didn’t sort of get along during the shooting of it so that made it really painful physically because he’s much bigger and stronger than I am, and painful emotionally because I was sort of hurt – he was doing a sort of method thing. I think we started to look for things that we didn’t like about each other.

[in a scene where Healy is in great pain] Doing something like that, letting all that out – as painful and horrible as it looks – it’s extremely cathartic it feels really good, you feel really good to have “gotten there.” I found out the next day that they had lost the chip in the camera, it was all gone forever.  We picked it up again a couple days later when everyone had left and got the coverage on it, and it was still all there – whatever I had tapped into was still very much with me. That was a very valuable lesson; the doing of it is sometimes all you get with these things. Sometimes the movie never gets finished or certainly never plays in front of an audience. This film has been bought by Drafthouse films and it’s going to come out in theaters and people are going to see it and it’s getting really good reviews – that’s all stuff that you have to remind yourself is extra.

Q: Was your writer/director E.L. Katz trying to peripherally comment on the desperate times we still find ourselves in? Was that part of it?

A: Trent wrote the script ten years ago when he had a kid and he was really worried about having the kid. It’s not like were ignorant to the fact that its about that, smart audiences can take that extra layer away with them, but if it’s just a fun ride it’s that, too. We certainly never talked about making a statement about capitalism or how awful things are.

Q: How much to chop your pinky off in real life?

A: You know, someone asked me that and I don’t know – I suppose I have a price, it’s probably more than $25,000, I know that. Maybe 150 grand? You use it for like nothing. We’re not going to do it are we? We’ve done some events where we actually do these bets before the movie and it gets a little weird. A guy dipped his testicles in hot sauce down in Austin for my pants that I wear in the movie and $100. Somebody had “Cheap Thrills” tattooed on their butt for a pass to the following year’s film festival. We were like “nobody is going to do this” but they were up and out of their seats before they even knew what the dare was or what they were getting. I don’t know, maybe that’s just Austin.

Taylor is a Chicago-based writer and aspiring film historian. He is the editor here at TFP, and has contributed to a number of international publications such as Cinema Scandinavia, PopMatters, and Room 101 Magazine. He can also be found listening to podcasts, researching topics he has little use for, or running after a city bus.
You might also like
Midnight Movies

by Taylor Sinople on October 16, 2013
Equal parts police procedural, horror-comedy, and pitch-black fairy tale, “Big Bad Wolves” tells the story of a suspected killer and the men that kidnap him to extract a confession – by any means necessary. After paving the way for Israeli horror cinema with their 2010 slasher-horror flick “Rabies,” motion picture trailblazers Aharon Keshales and Navot Papushado […]