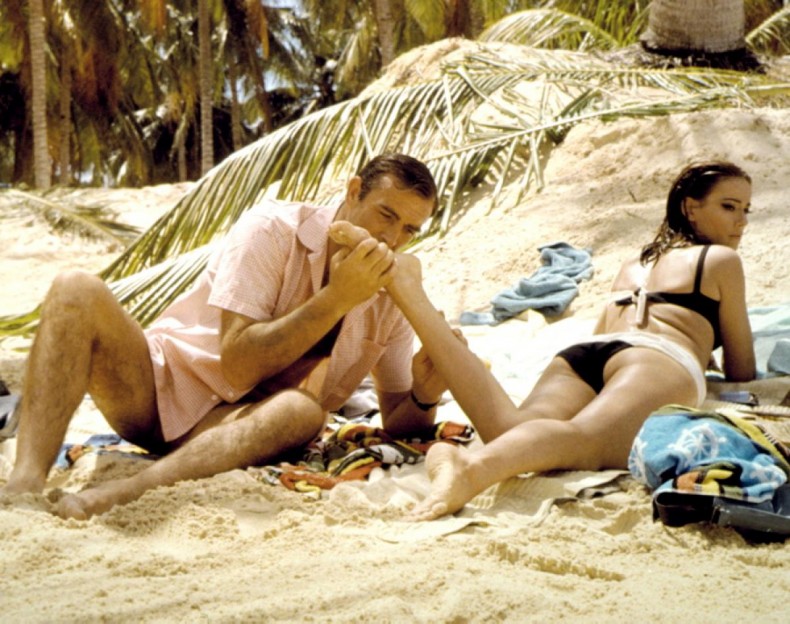 “Thunderball” can be summed up in one word: godawful.

We continue our journey through Bond with 1965’s “Thunderball,” and it’s here that we see the first marked drop in quality. To be fair to “Thunderball,” it’s following up “Goldfinger,” a tough demand for any film. However, from the very first scene to the opening musical number to the introduction of Bond on holiday, it is absolutely clear that “Thunderball” will not be able to live up to the standards set by its predecessors. Indeed, as the film drags on, it becomes even more clear that the film won’t even really be able to live up to action film standards at all, and instead be more of a slog than an adventure.

It’s not the plot of “Thunderball” that’s the problem. The plot remains largely true to form – SPECTRE has stolen nuclear missiles from NATO, and it’s up to Bond (played once again by Sean Connery) to recover them before the governments of the world are forced to pay a ransom. Along the way, he meets lovely ladies, kills some less lovely people, and ultimately triumphs over evil. It’s not terribly unique or inspired, but then, neither were the plots to the previous films. The simple, straightforward plot works in the film’s favour, creating tension and clear villains and heroes, both vital in an action film.

The set-up of the actual heist is good as well. While the exact details of the plot are nonsensical, it’s largely forgiven, the focus instead being on the stakes and the mystery of what’s going to happen and how. That said, the heist chooses to show every excruciating detail, from the actual hijacking of the missile-laden plane to the mechanics by which that plane is hidden. It drags down an otherwise interesting and exciting scene with unnecessary and boring detail.

This sums up one of the main problems with the film. Much of the action takes place underwater, giving the impression that filmmakers were so pleased to get access to scuba divers that they just wanted to include as many shots of them as possible. Underwater action scenes are painfully slow, and scenes of Bond or some other random minion swimming – the mask makes it almost impossible to keep track of which diver is which – are sometimes mind-numbingly boring.

To compound this pacing problem, “Thunderball” has some of the most present incidental music of the series thusfar. It is very distinct, and very clear when it’s played. The first time it’s used, it serves its purpose spectacularly, setting an eerie and creepy mood. By the twelfth time it’s used, it’s lost all meaning and serves only to remind the audience of better films they could be watching. Even the villain, Emilio Largo (Adolfo Celi), is largely generic despite his unhealthy interest with scuba divers. He doesn’t seem particularly brilliant or capable, but just average in his villainy.
To counter this, however, there are more interesting and varied characters than in any previous Bond films. Fiona Vulpe (Luciana Paluzzi) represents by far the most interesting female character to date (beyond the always delightful Moneypenny (Lois Maxwell), of course), and even provides excellent commentary on Bond’s “superhero” oeuvre. She sleeps with him as a way to trap and capture him. When he is taken aback by this, she mocks him, asking if he expected sex with him to immediately turn a woman from evil to good. It’s a brilliant line, and the perfect response to what I see as the debacle with Pussy Galore in the previous film. It comments on the ridiculousness of the entire series, lampshading it and showing a glimmer of self-awareness in a series that desperately needs it. It’s brilliant, and I loved it.

Of course, there are two counters to this. The first is that Vulpe dies for her trouble, having had the audacity to be womanly and not just shoot Bond on the spot. The sole interesting character is removed in a completely random gesture. While I can understand the difficulty in keeping the plot simple and needing to quietly excuse something that would make that more difficult, Bond’s reaction – and the film’s lack of reaction more generally – makes everyone seem like a sociopath, or at the very least like they were expecting a highly capable agent to up and die for no reason.

The second counter is a chronic one, though worse in “Thunderball” than ever before. This is Bond’s attitude towards women. In “Goldfinger,” we were treated to what was debatably the rape of Pussy Galore, complete with cheerful music and a horrific deus ex machina of an ending. In “Thunderball,” we are instead treated to the completely pointless sexual harassment and arguable rape of a spa attendant. This is, of course, once again played for laughs, with the attendant’s protestations seeming childish and ridiculous. As always, exploitation and abuse of women in the film is taken as a given and acceptable – if not encouraged – part of Bond’s character, a flaw no different than his tardiness. Once again, I can understand that this is a film from a different era, but I find myself questioning how and why Bond can be considered a hero when this is how he views the world. It raises the greater question of what a hero is at all. Is there room for a hero to do morally reprehensible things, such as rape? Can Bond still be an admirable and laudable hero despite his proclivity towards sexual assault?

In any case, the already dull “Thunderball” is not improved by the addition of Bond’s more obnoxious tendencies. It’s a painful film to watch, especially after the standards set by its predecessors. It’s boring, sometimes looks more like a Caribbean travel film than an action film, and can’t even succeed as a standalone film, let alone as a successor to the likes of “Goldfinger” and “Dr. No.” It’s the sort of film that makes me question why I’m watching all the Bond films at all.

Ah well. At least there was more than two hours in which I could bond with James Bond.

Janneke Parrish lives in South Korea where she struggles to order pizzas and consoles herself by watching far too many movies.
You might also like
sean connery

by Janneke Parrish on October 26, 2014
“You Only Live Twice” is a film you can get away with only seeing once.

by Janneke Parrish on October 5, 2014
“From Russia With Love” may not actually be from Russia, but it certainly sends its love.
comments
Leave a reply
Add Comment Register

END_OF_DOCUMENT_TOKEN_TO_BE_REPLACED
Taylor Sinople Picks: The 16 Best Films of 2016
Form and Function in Alex Ross Perry’s “Queen of Earth&...
Digging for Fire and Unexpected: Husband and Wife Process Parenthoo...
Every Thing Will Be Fine 3D Review