Features
0
previous article
Bonding with Bond: The Man with the Golden Gun (1974)
next article
A Fresh Look At: Black and White in Color (1976) 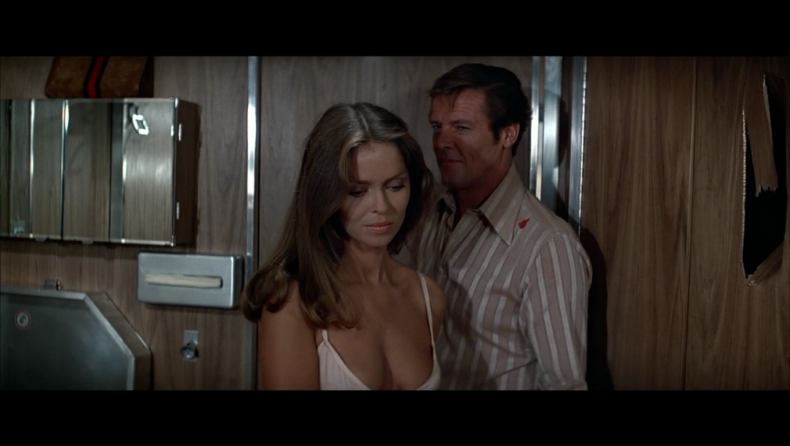 “The Spy Who Loved Me” isn’t one you’ll fall in love with, but it’s at least worth a casual acquaintance.

It’s interesting that, even as I get further and further into the Bond franchise, the films still don’t necessarily all look the same. “The Spy Who Loved Me,” for instance, represents another foray into the genre of romantic comedy coupled with action, though it is a better example of it than “On Her Majesty’s Secret Service.” I appreciate that the film makers were willing to mix genres a bit and try new elements. It keeps the films unique, even if some aren’t terribly memorable.

“The Spy Who Loved Me” is a romantic comedy in addition to its action tropes. It follows Bond (played once again by Roger Moore) as he investigates the disappearance of a British nuclear submarine alongside his Russian counterpart, Anya Amasova (Barbara Bach). The two discover a plot by Karl Stromberg (Curd Jürgens) to destroy the world and start a new life under the sea.

The plot is not necessarily the high point of the film. Stromberg is a bit ridiculous, and while his plan isn’t the worst plan ever seen in a Bond film, it would certainly fit in with other terrible SPECTRE plans. Indeed, Stromberg himself isn’t even a particularly memorable villain. There have been other villains with an unhealthy love of fish, and other villains with interesting lairs. Stromberg is outshone by his counterparts in “Thunderball” and “You Only Live Twice.” Much more fun is Stromberg’s henchman, Jaws (Richard Kiel), and the element of the thoroughly ridiculous he brings. Jaws is not a character that can be taken seriously – the fact that he is more reminiscent of a particularly sparkly Dracula rather than an action villain – but the action and fight scenes involving him are entertaining enough that he can be seen as a highlight of the film. Indeed, the fact that he continuously escapes whatever doom Bond throws at him is a testament to how much fun Jaws actually is. It’s my hope that I get to see him again.

Bach, too, does a fine job as Amasova. While hers isn’t the best performance from a leading lady, she does have excellent chemistry with Moore, and the two of them are one of the more convincing couples thusfar. The fact that Amasova is a competent spy in her own right, too, is yet another refreshing change of pace. The franchise, for all its previous faults, is progressing in its views, even if many of the underlying biases remain.

Really, there is very little to criticise about “The Spy Who Loved Me.” Its genre shift adds something new and interesting to the franchise, its story is solid, albeit derivative, and its villains are exciting. It’s competently made and a testament to the filmmakers’ abilities. That said, there’s also very little to make it truly stand out as an excellent film, or even an excellent Bond film. It’s not bad, but there’s nothing that really makes it stand out. It is simply a competently made action film with liberal dashes of romance and a cast and crew that know exactly what to do.

On the whole, then, “The Spy Who Loved Me” is good and worth a watch, though it isn’t necessarily anything spectacular. However, it’s a fine addition to the Bond franchise, and most definitely a good example of how to effectively blend genres to bring something new to a series.

Janneke Parrish lives in South Korea where she struggles to order pizzas and consoles herself by watching far too many movies.
You might also like
Lewis GilbertRoger Moore

by Janneke Parrish on December 14, 2014
"Moonraker" may dream of the stars, but it first needs to find its feet.

by Janneke Parrish on October 26, 2014
“You Only Live Twice” is a film you can get away with only seeing once.
Comments
Leave a reply
Add Comment Register

END_OF_DOCUMENT_TOKEN_TO_BE_REPLACED
Taylor Sinople Picks: The 16 Best Films of 2016
Form and Function in Alex Ross Perry’s “Queen of Earth&...
Digging for Fire and Unexpected: Husband and Wife Process Parenthoo...
Every Thing Will Be Fine 3D Review