Features
0
previous article
A Fresh Look At: Monty Python's Life of Brian (1979)
next article
Bonding with Bond: The Spy Who Loved Me (1977) 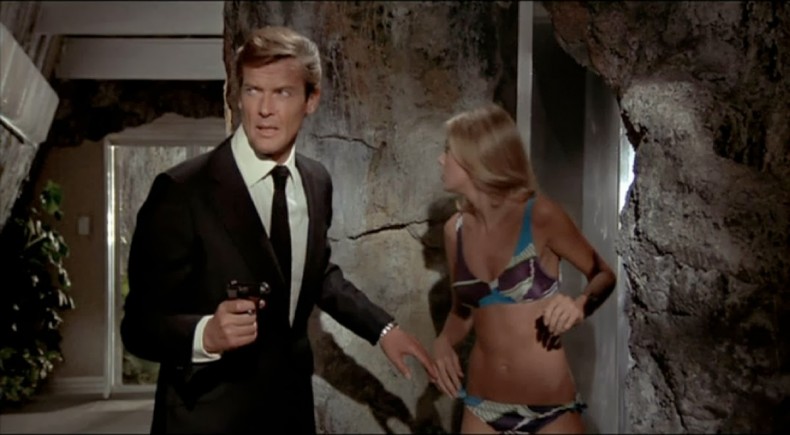 “The Man with the Golden Gun” probably would have done better with a golden writer.

“The Man with the Golden Gun” could be the most confusing Bond film I’ve watched so far. It’s not that the plot is complicated or anything like that. No, it’s more that the choices the film makers made when making this film make no sense to me. There’s elements of a really excellent film buried in “The Man with the Golden Gun.” There’s also a lot of very, very bad ideas covering them up.

But let’s start with the story. The plot of “The Man with the Golden Gun” is a massive bait-and-switch. It starts with M (Bernard Lee) telling Bond (Roger Moore) than an assassin named Scaramanga (Christopher Lee) has sent one of his famed golden bullets as a warning that he wants to kill him. M sends Bond to find Scaramanga and stop him. Bond starts to do so, but is interrupted by the arrival of the actual plot about a solar cell capable of solving the energy crisis. A Thai businessman named Hai Fat (Richard Loo) steals the solar cell, which is then in turn stolen by Scaramanga. Bond must recover it for the British government so that they can presumably generate solar power in sunny England.

There are a few problems with this story. The first major problem is that it can’t seem to decide on what it wants to be. Both the story of recovering this solar cell and the story of stopping an assassin are compelling, but together, they come off as a jumbled mess. The solar cell, for instance, feels like it was injected halfway through the film because someone looked at the script and decided the stakes weren’t high enough, but also didn’t feel like writing a new film. The film tries very hard to make the solar cell plot interesting, but it can’t succeed specifically because it feels so forced and pointless. While I’m told that the solar cell can solve the energy crisis, this fact alone is not enough to get me invested in the plot, not when so much has already been invested in Scaramanga and the idea of him as a spectacular assassin.

The decision to make the plot change gears entirely halfway through the film isn’t the only baffling decision the writers made. The inclusion of characters such as J.W. Pepper (Clifton James) makes no sense whatsoever. He serves no purpose whatsoever in the plot – except, perhaps, very bad and unwelcome comic relief – and distracts from whatever semblance of seriousness there might have been. The car chase Pepper participates in, for instance, is memorable only in how utterly ridiculous it is. Between Pepper’s inability to understand what’s going on and the cartoon sound effects, it’s impossible that the Bond franchise didn’t at some point descend into self-parody.

The most difficult part of the film, though, is Scaramanga himself. Scaramanga represents both the best and worst aspect of the film. Christopher Lee does an excellent job as Scaramanga, playing him as a highly capable assassin who still has a fanboy streak for the man he sees as the only one more capable than himself. His interactions with Bond are excellent and fully believable as a man meeting his idol. Moore is less believable, and his anger sometimes seems over-the-top, but it’s largely forgivable, especially next to Lee’s performance.

The problem with Scaramanga is that he isn’t a terribly good villain. He’s friendly, welcoming, and comes off as a devoted follower of Bond, not as someone who wants to do evil in the world. I have no real desire to see Scaramanga defeated because he doesn’t have a particularly evil plan and doesn’t do anything particularly bad. Yes, it’s implied that he raped Andrea (Maud Adams), but this is something we are told and which doesn’t match his character that we are shown. In any case, given Bond’s history, I’m not entirely convinced that rape in a Bond film is a strong indication of villainy.

It’s because Scaramanga isn’t a terribly good villain that this film fails. The entire climax falls flat if it’s seen as anything other than a duel. If one approaches it as a battle for the fate of Britain or the world, then it’s uninteresting. As a contest between two assassins, though, it’s excellent. Scaramanga is an amazing character, and certainly one of the highlights of not only this film, but of the Bond franchise as a whole. This does not automatically make him a good villain. His motivations aren’t villainous – indeed, perhaps more good is done for the world if he has the solar cell than if the UK does – and he himself isn’t evil.

On the whole, “The Man with the Golden Gun” has so many good elements. Scaramanga is fantastic, the settings are locations are gorgeous and fun, and Moore mostly gives a good performance. The problem is that these good elements have to contend with some very, very bad elements, such as the plot and the inclusion of J.W. Pepper. Despite its best efforts, the film can’t recover from the fact that its plot makes no sense and its villain isn’t terribly villainous. The good elements serve as a reminder of what could have been, but they don’t save the film from mediocrity.

Janneke Parrish lives in South Korea where she struggles to order pizzas and consoles herself by watching far too many movies.
You might also like
guy hamiltonRoger Moore

END_OF_DOCUMENT_TOKEN_TO_BE_REPLACED
Taylor Sinople Picks: The 16 Best Films of 2016
Form and Function in Alex Ross Perry’s “Queen of Earth&...
Digging for Fire and Unexpected: Husband and Wife Process Parenthoo...
Every Thing Will Be Fine 3D Review