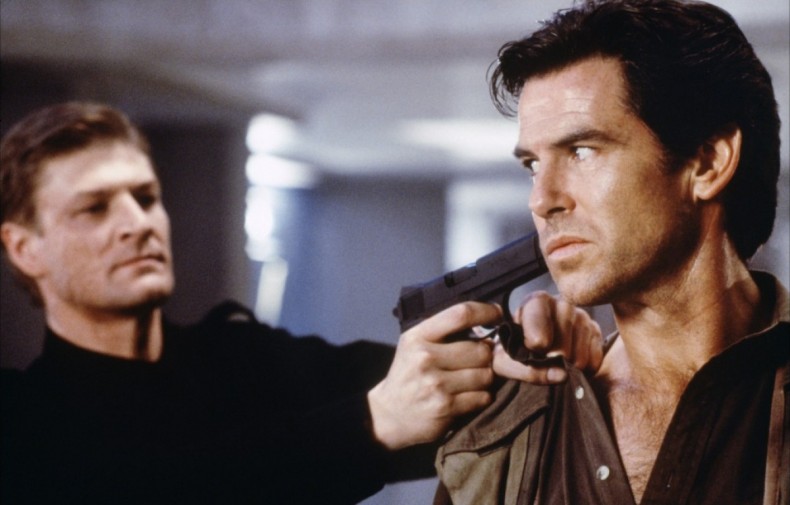 As much fun as it is to keep a golden eye on Pierce Brosnan, GoldenEye leaves a lot to be desired.

As the opening credits of GoldenEye make clear, we are in a new age. The world has changed, and Bond with it. Just as stone Lenins are being smashed and Soviet motifs burned, we also see a Bond willing to go where no Bond has gone before. Of course, he does so by shooting Russians like every other Bond has done, but the effort to emphasise that the Soviet Union has fallen has not gone unnoticed.

The fact that this is also the first credits sequence to actually reference aspects of the film – well, beyond the fact that it contains a love interest – also did not go unnoticed, and was greatly appreciated. Indeed, GoldenEye has the best credits sequence thus far, and its combination of song and visuals do an excellent job setting the mood for the film.

From a geopolitical perspective and as a historical artifact, GoldenEye is a fascinating film. It represents the first film made after the end of the Cold War, though it’s abundantly clear that the film’s writers don’t feel quite comfortable leaving the Cold War yet. Despite the new flag sewn on to uniforms, there is very little difference in atmosphere between this film and one set fighting Soviets. While it’s ostensibly about the aftermath of the Cold War and the dangers of the breakdown of the Soviet Union, it’s difficult to see any really meaningful difference between this evil scheme and one backed by the Soviets in Octopussy. Perhaps it represents an inability to accept that the Cold War was over. Perhaps this represents a continued fear of the Russians and their capabilities. Or perhaps it just shows that the writers were unwilling to leave a tried and true enemy.

There are, however, several more aspects that deviate from what’s expected. I’ve noticed throughout my viewings of these films that each is a sort of microcosm of film-making of its age (I commented on this as well in my Live and Let Die review). Each follows the particular trends of its age, sometimes successfully, and sometimes less so. GoldenEye is no different. Though it still features Russians as its enemies, the decision to have the key strategic tool be a computer rather than any particular gadget is as much a 90s trope as it’s possible to get. The music throughout the film and the camera angles never before seen in a Bond film, too, show that the film has gone beyond the clutches of the 80s and now exists solely in the tropes of the 90s. In some ways, it represents an improvement. Campiness is gone completely – save for the rare one-liner – but so too is the overly gritty violence of Licence to Kill. In GoldenEye, the violence is more routine; if there’s an expectation to that, at this point, the audience will be desensitised to it.

Really, this is one of the more interesting aspects I see in the slow evolution of the Bond film – the inclusion of violence. Sean Connery’s Bond wasn’t one to shy away from violence by any means, but equally, he wasn’t one to pick up a machine gun and mow down soldiers willy-nilly, evoking images of the villain who had done so only an hour before. Pierce Brosnan’s Bond doesn’t revel in it, but it must be asked whether portraying violence as routine is necessarily any better.

On the other hand, GoldenEye features what might be one of my favourite Bond girls so far, Natalya Simonova (Izabella Scorupco). The fact that she is capable and tells Bond flat-out what she thinks is refreshing and enjoyable. The casting of Judi Dench as M, too, is an absolutely fantastic change of pace, and her lectures to Bond are a much-needed breath of air. The diversification of the cast to include women in more than just secretarial and sex roles is a positive change and represent some of the more positive aspects of these films.

However, it’s difficult to say the same of the villain, Alec Trevelyan (also known as Janis). While Bean has a fine performance, the character himself isn’t terribly spectacular, with his motives sometimes feeling confused. His obsession with revenge seems to come out of nowhere, as does the fact that he’s robbing a bank at all. Coupled with the sometimes infuriating comic relief Boris Grishenko (Alan Cumming), he comes off as lacklustre and not really a villain to be taken seriously. He has no credibility as a former MI6 agent, and the idea of getting revenge for the treatment of the Cossacks is not believable at all.

This represents much of why this film isn’t terribly believable as a Bond film. The villain seems not like a character, but rather a mishmash of ideas that just didn’t work on their own. The inclusion of Russians as the villains yet again seems to show an unwillingness to accept that the Cold War actually has ended. The violence makes the whole film feel not so much like a film, but a series of video game levels, each more bloodthirsty than the last. All of this isn’t helped by the fact that this is the first film not to play the iconic Bond music in its entirety. Even the opening shot doesn’t feature it, instead playing a jazzy tune.

While GoldenEye is by no means terrible, it isn’t spectacular either. The actors are acceptable, but ultimately, are dealing with too flawed a script to be able to make anything particularly good with it. They make do with what they have and make a solid, if uninspiring, film.

Janneke Parrish lives in South Korea where she struggles to order pizzas and consoles herself by watching far too many movies.
You might also like
Martin Campbellpierce brosnanSean Bean

END_OF_DOCUMENT_TOKEN_TO_BE_REPLACED
Taylor Sinople Picks: The 16 Best Films of 2016
Form and Function in Alex Ross Perry’s “Queen of Earth&...
Digging for Fire and Unexpected: Husband and Wife Process Parenthoo...
Every Thing Will Be Fine 3D Review