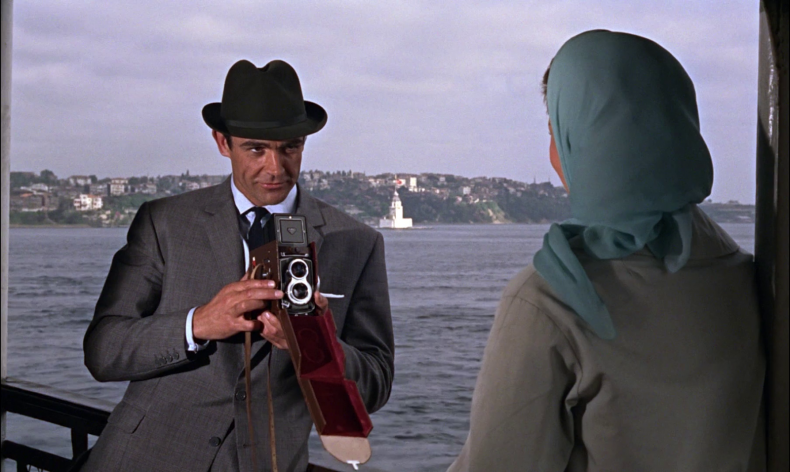 “From Russia With Love” may not actually be from Russia, but it certainly sends its love.

My journey through the Bond canon brings me next to “From Russia With Love,” the sequel to “Dr. No,” and – in my view – the proper beginning of James Bond films as a series rather than as a successful film and its sequel. Its end credit sequence, for instance, is kind enough to remind the audience to look forward to the next film – “Goldfinger.” More importantly, though, “From Russia With Love” starts to take on some of the more Bond-like characteristics. It still lacks a bombastic opening musical number, but it does have a fixation on Bond’s gadgets and recognises the strength of its action scenes. What we think of as “Bond” is beginning to take a clearer shape, both in the good and the bad.

First, though, the good. “From Russia With Love” introduces a mysterious, cat-stroking figure known only as Number 1, the mysterious head of SPECTRE. To see this image of a cat-stroking villain played completely seriously is almost laughable. It’s an image, after all, that has been parodied almost to the point where the parody is more well-known than the actual subject. Indeed, other than knowing (vaguely) that these parodies focused on a Bond villain, I couldn’t have begun to say which film specifically they came from. However, it is a testament to some of the endearing qualities of these villains that, rather than coming off as outdated or cartoonish, Number 1 is a legitimately intriguing villain. He is menacing, and his introduction as an off-screen voice serves to keep him intimidating and mysterious. The use of Siamese fighting fish as an analogy for his plans as well serves to remind the viewer of exactly how dangerous the Cold War could be, and how dangerous those who lurk on its outskirts are. Despite knowing that Bond will foil whatever scheme Number 1 has concocted, there is a legitimate sense that this time, it could work, and that Number 1 might just be the villain to pull it off. It’s fantastically done, and is most definitely a credit to the film makers.

By far my favourite character in the film, however, is Rosa Klebb (Lotte Lenya), terrifying ex-Russian secret agent turned operations manager for SPECTRE. She serves as the foil to Number 1 and Kronsteen that Grant could have been. She doesn’t come off as a particularly good planner or particularly good at responding to new information or situations. She is, however, gruff to the point of almost immediate likeability. I couldn’t help but admire her utter devotion to the task at hand, and her clumsy – yet effective! – manipulation of Tatiana Romanova (Daniela Bianchi). It’s a beautiful performance, and the character is guaranteed to deliver a good time every time she’s on screen.

This brings me to the Bond girl of this film, Tatiana Romanova. Romanova is, much like her name, a combination of stereotypes and uninteresting tropes coalescing to try and form a character, but not really creating much of anything. That said, she has buckets more character than Honey Ryder from “Dr. No,” and so represents a step forward in that regard. She is at least somewhat active, skulking around and trying to be a secret agent with varying levels of success. However, as is becoming more expected with these films, what character she has fades away as she interacts with Bond, instead turning her into a particularly buxom shadow.

“From Russia With Love” also continues the problem of racially questionable depictions of minorities, this time looking at Roma rather than black Jamaicans. A scene in a Roma camp seems to exemplify every possible stereotype one could have of the Roma, including that they steal and fight each other for poorly explained reasons. The fact that Bond eventually solves Roma squabbles through a heavily implied threesome does very little to balance out the negative depiction, and indeed, only serves to underline the problematic ideas at play. While none of it is quite as bad as the depictions of Quarrel in “Dr. No,” when combined with the sexist depiction of women, the elephant in the room once again raises its head and asks whether this is something that is acceptable. I understand that Bond is from the 1960s, and that one can’t expect a perfectly egalitarian film. However, this does not mean that it ought to be watched from the 2010’s with an uncritical eye. The question that brought me into this series is still here, and each film and its choices of how to depict non-male, non-white people just grinds it in further. Why Bond? Why is this character such an icon?

Ethical questions aside, “From Russia With Love” is an improvement over “Dr. No,” quite an accomplishment indeed. Whereas the climax of the first was slow and dull, “From Russia With Love” showcases fun action scenes and gadgets. While Dr. No was ultimately rather boring and disappointing as a villain, Number 1 promises more interesting things in the future, even if his current plan was a bit lacklustre. Even characterisation has been improved, though it still leaves quite a bit to be desired. In the end, “From Russia With Love” is a highly enjoyable addition to the series, and well worth a watch.

Janneke Parrish lives in South Korea where she struggles to order pizzas and consoles herself by watching far too many movies.
You might also like
Bonding with Bondjames bondsean connery

END_OF_DOCUMENT_TOKEN_TO_BE_REPLACED
Taylor Sinople Picks: The 16 Best Films of 2016
Form and Function in Alex Ross Perry’s “Queen of Earth&...
Digging for Fire and Unexpected: Husband and Wife Process Parenthoo...
Every Thing Will Be Fine 3D Review