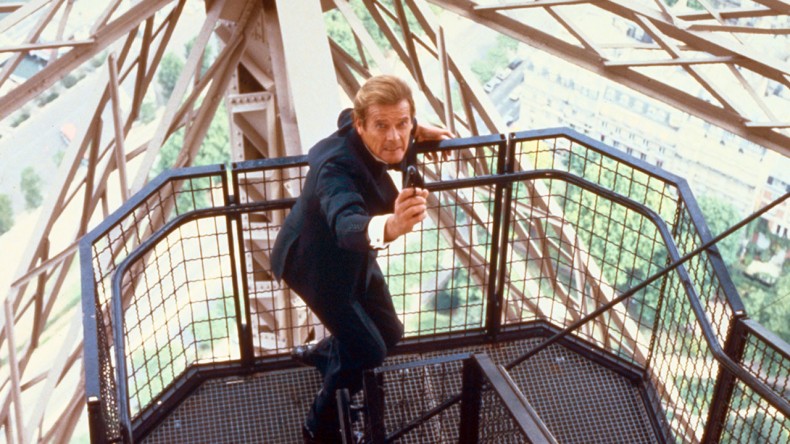 A View to Kill gives us our last unfortunate view of Roger Moore.

It is with a heavy heart that I reach the end of the Roger Moore era of Bond. It’s not that Moore was a particularly spectacular actor or that the films of this era were particularly good. Rather, it’s that the style Bond films took on over the course of Roger Moore’s tenure fit perfectly with the character and with the development he had undergone.

The seven films of the Roger Moore era represent Bond at (so far) its campiest. From a slow and terrible start in Live and Let Die, the progression through the 70s and 80s came to reflect the best of the time period. Moore’s Bond is witty, ridiculous, and – most importantly – fully aware that he is a fictional character. He knows full well that none of what he is doing can possibly be real. He embraces it, and in doing so, greatly improves the character.

The stories, too, better reflect a changing world. The increase in stories revolving around Cold War tensions and the myriad of ways in which that could play out are interesting. What’s perhaps most interesting of all about the era is the fact that, rather than always being the enemy, Bond is often seen in collusion with his Soviet counterparts, a narrative choice which highlights just how terrifying the villains are, as well as the more interesting historical narrative about thawing relations between the Soviets and the West.

All of these factors have come together to make Roger Moore my favourite Bond so far. The Moore films have just been the most fun to watch, even if they aren’t always the most thrilling or of the highest quality. Even then, it includes some of my favourite Bond films such as The Man With The Golden Gun and Octopussy. The campiness and wit blended with tension make them enjoyable, even if they aren’t spectacular action.

In A View to Kill, we see many of these same tropes that have made the Moore era so much fun. Indeed, the film itself is, in many ways, a rehash of Octopussy, and is strongly reminiscent of it, even if it isn’t as good.

In this film, Bond (played for the last time by Roger Moore) investigates a rigged horse race, and through it, uncovers a plot by Max Zorin (Christopher Walken) to destroy Silicon Valley and monopolise the microchip industry.

In many ways, this is a very strange film. As I said previously, it feels like it wants to rehash Octopussy by having a bait-and-switch plot. It starts with a slow, almost miniscule crime which is then revealed to have drastic geopolitical consequences. It’s a more engaging way to introduce plots, as it allows the audience to solve the mystery alongside Bond. That excitement of solving it keeps the audience hooked and holds their attention throughout the film.

However, whereas Octopussy followed the reveal of the larger plot with a grand international climax, A View to Kill doesn’t quite manage the same excitement and tension of the previous film’s climax. Even as Bond disarms the bomb and Mayday (Grace Jones) sacrifices herself to dispose of it, the victory feels hollow. The idea behind it was so ludicrous that it never seemed real, and so any real tension was gone by the sheer fact that this couldn’t happen.

Also contributing to this is the villain, Max Zorin. Zorin is a psychopathic genius, a fact emphasised time and time again. This would be acceptable, but the film goes a step further and tries to explain why he’s a psychopathic genius. Rather than being just another psychopath, Zorin is instead a Nazi-created clone psychopath. This attempt to make him even more evil backfires spectacularly, only further highlighting how ridiculous and cartoonish the plot is. While Walken does a fantastic job as Zorin, nothing can overcome the sheer absurdity of the script itself.

To be clear, there’s nothing wrong with a little absurdity. As I said earlier, I like that Bond is a bit cartoonish in this film, and that he’s not really meant to be real. However, there does need to be at least some grounding in reality, some sense that these are things that could happen, even if it has to be in a slightly altered version of our world. When all the villains thusfar are more or less willing to play by the rules of reality, it seems absurd that Zorin should be able to throw them all away just because he’s a product of Nazi experiments.

The film also falls a bit flat with its leading ladies. In this film, Bond finds himself working with a series of ladies, including Mayday and Stacey Sutton (Tanya Roberts). It’s unfair to compare films, but Octopussy shows how this could have been done well. In Octopussy, women are, in many ways, equal partners to Bond, or at least more equal than they ever have been. They have agency, can take care of themselves, and generally are competent helpers. In A View to Kill, women fluctuate between sexless, terrifying man-beasts who have no real character outside the men in their lives – as shown by Mayday – and utterly helpless women incapable of doing much more than getting abducted – as shown by Stacey. This is a huge step backwards, especially for a series that has come so far in its representation of women and minorities. For the writers to suddenly decide that James Bond’s retinue of helpers and partners are no longer equals is devastating to the franchise. Indeed, part of what made the previous films good was the fact that Bond worked together with those around him to accomplish his goals. A View to Kill throws that idea out the window.

A View to Kill is not the worst of the Bond films, nor the worst of the Moore era. However, it’s a disappointing end to the era. Rather than having the grand send-off of a spectacular movie like Octopussy, Moore is instead bid adieu with a lacklustre film that still has some charm, but isn’t nearly as good as it could have been.

Janneke Parrish lives in South Korea where she struggles to order pizzas and consoles herself by watching far too many movies.
You might also like
Bonding with BondChristopher WalkenJohn GlenRoger Moore

END_OF_DOCUMENT_TOKEN_TO_BE_REPLACED
Taylor Sinople Picks: The 16 Best Films of 2016
Form and Function in Alex Ross Perry’s “Queen of Earth&...
Digging for Fire and Unexpected: Husband and Wife Process Parenthoo...
Every Thing Will Be Fine 3D Review