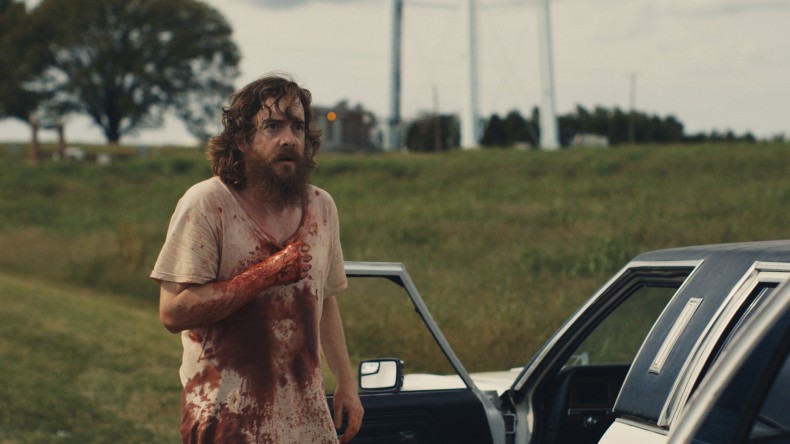 Upon hearing of the early prison release of his parents’ murderer, Dwight (Macon Blair), a mysterious vagrant living out of his car, returns to his hometown to exact brutal revenge. When his violent outlash starts a war with a backwoods family, the awkward and far-from-militaristic drifter enlists the help of an old high school buddy (Devin Ratray) to arm up and protect his estranged family.

“Blue Ruin” is an uncommon take on the revenge thriller that finds itself more interested in the aftermath of the act of revenge than the journey to fulfill it. The allure of this dark, minimalist gem is something that’s all too rare in independent cinema today – a strong point-of-view character. Dwight looks, we look, we want to look. The opening of the film drops us into Dwight’s life as a nomad – emotionally broken from the loss of his parents. We get to know him through the little details in his life – the rotted meat he steals to eat, his invasion of a random home for a quick bath, his rusted out, baby blue, early 90’s Pontiac Bonneville. The questions about his past and his current mental state are quietly answered in mostly silent sequences that would give Ryan Gosling a run for his money. The stillness is punctuated by the flash of brutal, graphic violence. Macon Blair stars in his first lead performance as the key captivator and for much of the runtime the sole inhibitor of the screen – tasked with guiding us through the messy emotions that follow tragedy.

Visually, “Blue Ruin” turns out to be, well, quite blue. Writer/director Jeremy Saulnier also served as cinematographer and exercised careful control over the color design of the film. In the first third, Dwight is frequently cast into an omnipresent blue light that slowly grows warmer throughout the rest of the story.

The film’s only weakness lies in a brief lull three-quarters through the film – there’s a major sequence during which Dwight prepares to defend a home that Saulnier uses twice in the film and the second iteration suffers a loss of intensity. Something about this 15-minute stretch loosens its grip on the otherwise taut tension that the other sequences strike. Overall it doesn’t detract from the deliciously dark tone, but another pass over the material in the second half of the film could have made the difference between a great film and a masterpiece. Fortunately, in that special art-house kind of way, you can really sense that everyone is putting in 110% to make this film special – and it works.

Selections from the post-screening Q&A with Jeremy Saulnier 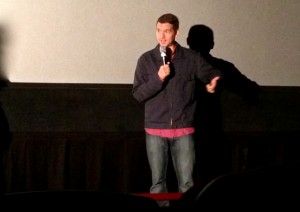 Q: You were not only writer/director but also director of photography on this film; can you talk about the process of putting all of those elements together?

A: “We all had to wear a lot of hats on this movie, and it was mostly by necessity. This film was always underfunded and ‘never-quite’ funded. My wife and I drained our retirement accounts and we collected some investments from our in-laws, a kickstarter campaign… We just couldn’t really afford to hire the dream team. [The film] was very personal to me, and I took time to write it and design it from the beginning so it wasn’t too crazy for me as far as the execution other than the stress level. But I am a cinematographer by trade; I do a lot of corporate videos and independent films. So the technical stuff came naturally to me and that was a good fallback. I designed the movie to be very visual, and quiet – formal.  I planned the first third of the film…it was meticulously storyboarded and engineered and it was very much as I had envisioned it but as the film progressed I was behind on my storyboarding and this and that and it devolved from layered storyboards to scrawled stick figures. It was a challenge especially when we did heavy dialogue because that was when I was operating the camera as well as lighting and directing and that’s where I found myself at a loss because we do these intense dialogue scenes and I would just collect these notes like “ah, I’m going to nail it this next take – I’ll tell them these genius notes and it’s going to be great” but by the end of the take I’d just forget all of my notes because I’d be working on head room and technical stuff. It was an endeavor that people warned me about – don’t do all three – but I just had to do it.”

Q: It was a very impressively directed film, it looks like its work from a very experienced director. How many feature length films have you done before?

A: “My first movie – “Murder Party” – was a fun, low-rent romp, horror-comedy Halloween-night adventure. I was turning 30…I had this timeline and I had not made a movie yet – I made a short film in 2004 which did quite well but didn’t get me a feature job. So my wife and I self-funded this movie [“Murder Party”] along with some friends and made it before I turned 30, and I had to limp back to advertising where I make my living. I had been a director since I was eight years old, but no one else knew that. I would do all these other projects on the side – a short film and a feature. I never got the traction, though, I had several scripts I wanted to get off the ground, workshops, I had always been a filmmaker but just couldn’t monetize it. And so this film [“Blue Ruin”] was something I did after I decided – I was in advertising and making a living again but I couldn’t break the bank again on another movie so I went back as a cinematographer and shot about five films from 2009 to 2011. It was great; it was like film school part two. I watched and learned and waited and sort of bided my time and picked apart what was wrong with independent film and how schedules come before creative elements and I knew ‘I’m not doing an 18 day shoot I’m doing a 30 day shoot’, ‘I’m not getting the best camera I’m getting the cheapest one I can get that’s acceptable, and I’m putting all the money and all the effort in front of it.’ So I definitely bided my time and I pounced – I saw a void in the marketplace, too many talky-indies in contained environments, too many genre films that were just brutal exploitation movies and I said, “I’m going to go right in between there.”

Q: Why did you select a subject with so much violence?

A: “It’s funny you say that. The body count in my movie could take place in about 45 seconds in an action movie and no one cares. And this film is exactly that – it’s troubling”…”I wanted it to be genuine, I wanted to make this violence brutal, shocking and disturbing.”

“I chose it carefully. There’s six people who die in the movie, and I was at a film festival last month and I saw “White House Down” and I was curious because we were at the same festival and I counted six people in thirty seconds and no one asked that question.”

Q: “You spoke a little bit ago about the cameras”…”what did you guys shoot on?”

A: “The Canon C300 – I chose it specifically for this movie, I bought it. And the key was not so much the technical specifications but the power of owning the camera and the lenses, because you hear too many times with the financier or producer ‘Oh, we can’t afford that, it’s too many days’ and the directors that I’d been shooting for on the Arri Alexa – which is an awesome camera, the best out there – we’d never have time to do what we wanted to do. We had the best camera, the best resolution and it looked amazing, but we’d always get stuck in rooms and we couldn’t dolly or we couldn’t move the camera like we wanted to. So I picked a light camera that I could own so that I could go shoot a sunset by myself in my minivan and no one could tell me I couldn’t.”

“I put all the effort on how it looks. My analogy is, you have all these cameras – you’ll see these tests – Red Epic and Alexa – all these awesome cameras side by side and you’ll see the test footage is always a person sitting in a chair with a hard light – it’s nothing – if you take any of those cameras out there and tear down the walls and get an old rusty car and some blood and some sweat and some air, that’s what looks good – what you’re looking at, and the cameras are just secondary.”

Q:  There’s a lot of use of the color blue in the film, why is it called “Blue Ruin”?

A: [sighs] “There’s many answers to that, at one time we had forty titles, because title is important. I didn’t know that there was so many “blue” movies: “Blue Jasmine,” “Blue Caprice,” “Bluebird,” “Blue is the Warmest Color”. But that was the one that won, and we had lots that were really cool titles but they were too masculine, too bad-ass, too genre, and I really wanted this movie to start out with more of a feminine tone and a quiet, cool tone and then let the shock of the violence disrupt the audience and then move on to this downward, tragic spiral.

“’Blue Ruin’ just came – I was searching for the word “debacle” and I came across this lesser known term for debacle, ‘blue ruin.’

Taylor is a Chicago-based writer and aspiring film historian. He is the editor here at TFP, and has contributed to a number of international publications such as Cinema Scandinavia, PopMatters, and Room 101 Magazine. He can also be found listening to podcasts, researching topics he has little use for, or running after a city bus.
You might also like
Blue Ruinciffindependent cinemaJeremy Saulnier

by Taylor Sinople on January 19, 2014
Independent revenge thriller to hit theaters and V.O.D. April 25, 2014. Upon hearing of the early prison release of his parents’ murderer, Dwight, a mysterious vagrant living out of his car, returns to his hometown to exact brutal revenge. Clumsy and inept with matters of violence, Dwight ends up starting a turf war with a backwoods […]
comments
Leave a reply
Add Comment Register