8 Films to See at the 51st Chicago International Film Festival 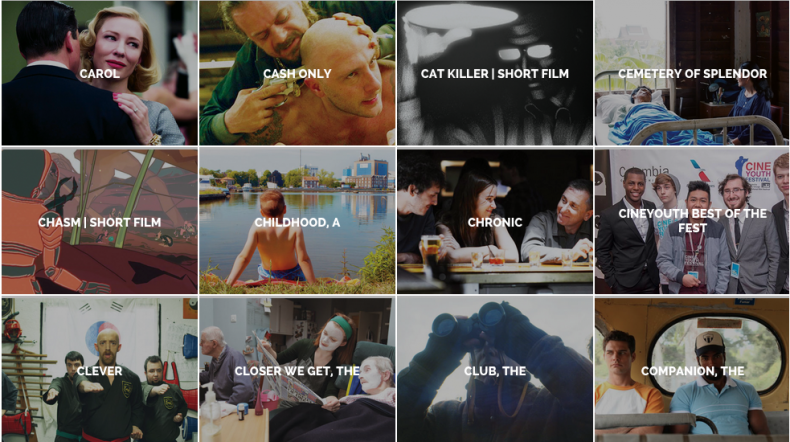 I haven’t seen all of the 120+ films showing at the fest this year, not even close, but I’m excited to share a few of my favorites from what I have seen ahead of opening night on October 15th for anyone looking for a few recommendations. 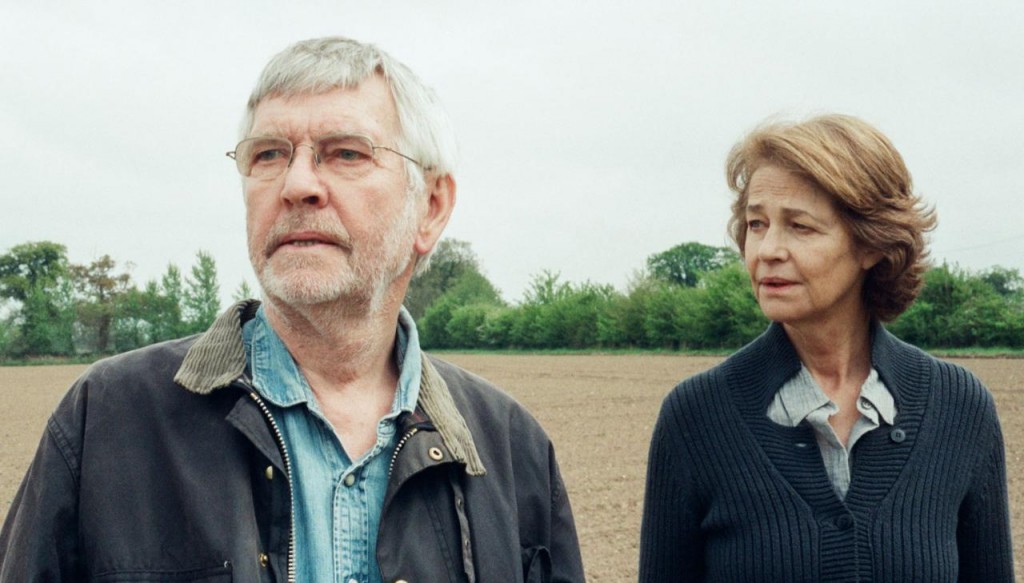 Long-forgotten memories resurface to pollute the present a week before a couple’s 45th anniversary party in this UK domestic drama. Understated performances from Tom Courtenay (Dr. Zhivago, The Dresser) and Charlotte Rampling (Never Let Me Go, Broadchurch) delight under Andrew Haigh’s considered direction, which allows plenty of room for Rampling’s stand-out naturalism to compel. A more vibrant monologue or confrontation, like the dinner scene that comes at just the right time in Le Week-End, may have gone a long way in mixing up the tone in this very deliberate drama, but 45 Years is nonetheless effective in its involving portrayal of the pervasive impact past experiences can have on the present. 3 out of 4 stars. 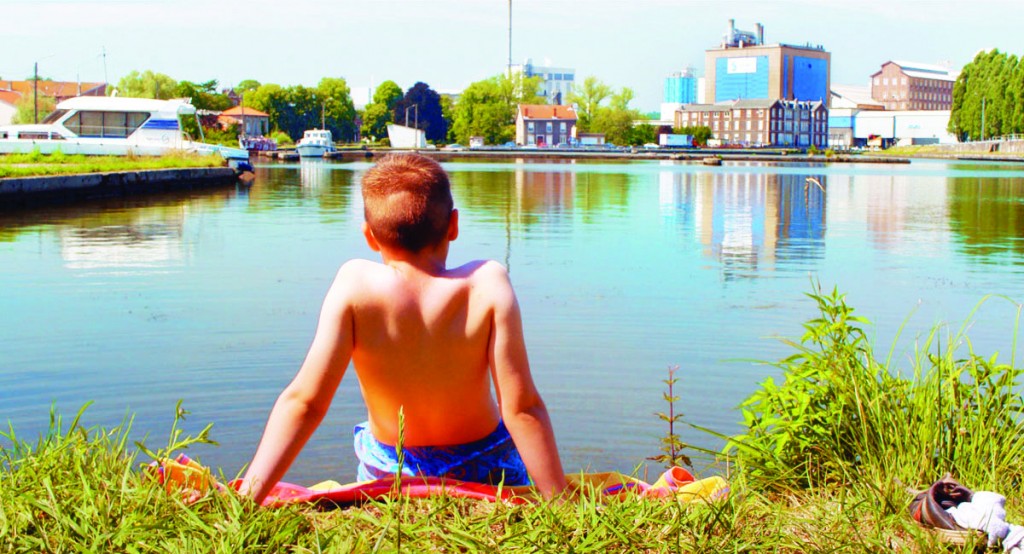 A Childhood
Directed by Philippe Claudel
100 minutes | French with subtitles

In a village in France, 12 year old Jimmy (Alexi Mathieu) takes on the responsibility of father and friend to his younger brother while his junkie mother (Angelica Sarre) and her new boyfriend (Pierre Deladonchamps, Stranger By the Lake) leave them little food or attention to spare while partying and scheming new, illegal ways to make money. Presented with both harsh moments and a calming, atmospheric tone, A Childhood is evocative and a little bit heart-breaking without ever really gunning for it. Take a scene in which Jimmy attends a birthday party for a girl he likes – a wealthy girl whose backyard party resembles Monet’s gardens. A series of shots establishing the children in party hats and dresses and the other goings-on of the party are moving because we’re seeing them from Jimmy’s point of view as someone who is being raised unfamiliar with the workings of a happy family in a safe home. We can feel this is an affecting moment for Jimmy without having to be told. A Childhood isn’t a new story – there are many other dramatic depictions of children around the world coming of age in difficult situations – but it is a successfully delicate one. 3 out of 4 stars. 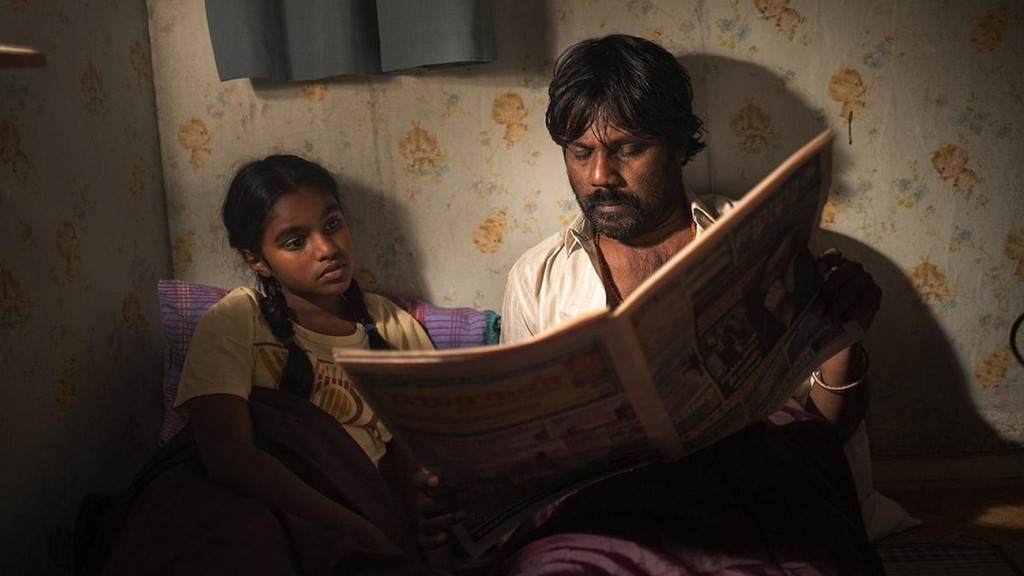 Dheepan dreams of elephants. This Palme d’Or-winning drama follows three Sri Lankan refugee strangers who, in order to escape the devastating civil war raging in their homeland, take on the identity of husband, wife, and child, to emigrate to a gang-controlled suburb of France. Former real life child soldier Antonythasan Jesuthasan stars as the titular character and the would-be father, and lends the film a powerful pathos in his desperation to persist in their increasingly dangerous living situation. Consistently brilliant director Jacques Audiard (A Prophet, Rust and Bone) ties together compelling scenes of domestic social realism with the suspense and thrills of a genre film. Skilled, handheld photography and a tight edit make Dheepan a layered film that successfully immerses the viewer in the cultural alienation experienced by its protagonists. 3.5 out of 4 stars. 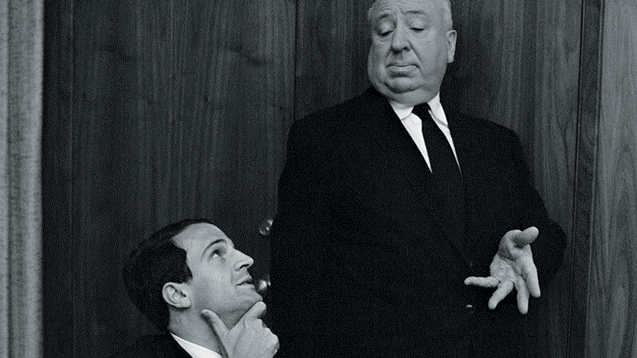 A documentary about a prolific French filmmaker interviewing a legendary American filmmaker and producing one of the all-time most essential books on film? And to talk about it, you interview Akira Kurosawa, Martin Scorsese, Richard Linklater, Wes Anderson, David Fincher, Olivier Assayas, and more? Okay, Hitchcock/Truffaut may be somewhat of an obvious pick for easy praise, but it’s still worth noting how well critic-turned-doc-director Kent Jones crafts this insightful cinematic love letter, even if simply showing a random 82 minutes of footage of Hitchcock or Truffaut on or off set would have cinephiles hitting the theaters day one. 3.5 out of 4 stars. 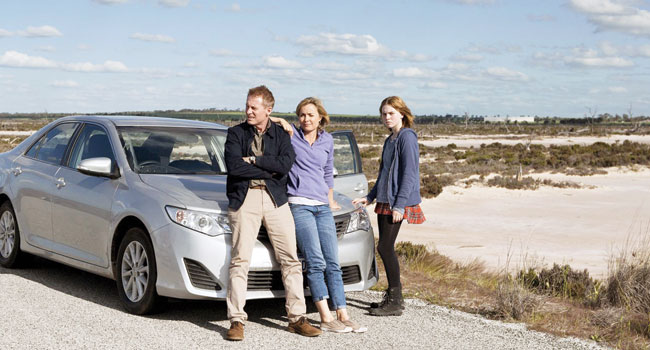 The search for a missing teenager is at the center of this multi-perspective Australian dramedy directed by Sue Brooks (Japanese Story). Every festival season sees one or two of these types of films with a story re-told from varying characters’ points of view (last year it was the successful Italian drama Human Capital), but Looking for Grace is pleasingly subversive in that it holds no tightly-wound mystery at the core of its narrative. Grace is lost and then found again all within the first twenty minutes. Instead, as we go back in time to follow the story again from new perspectives – Grace’s mother, father, or the private investigator hired to track her down – it’s as if we’ve fallen into separate short films, connected by the same movie-world. In the end, it feels like a couple of the most interesting characters are snubbed from having their stories told, but Brooks’ disinterest in using her character strands to tie together some kind of coincidental, thematically perfect moment does add a lot of modesty to this nonlinear structure that’s more often used to build intensity towards an overly-constructed climax. The problem is quite the opposite here – the climax occurs too early and leaves us with an unsatisfying 20-minute wind-down, but it’s an interesting development in approach nonetheless. 2.5 out of 4 stars 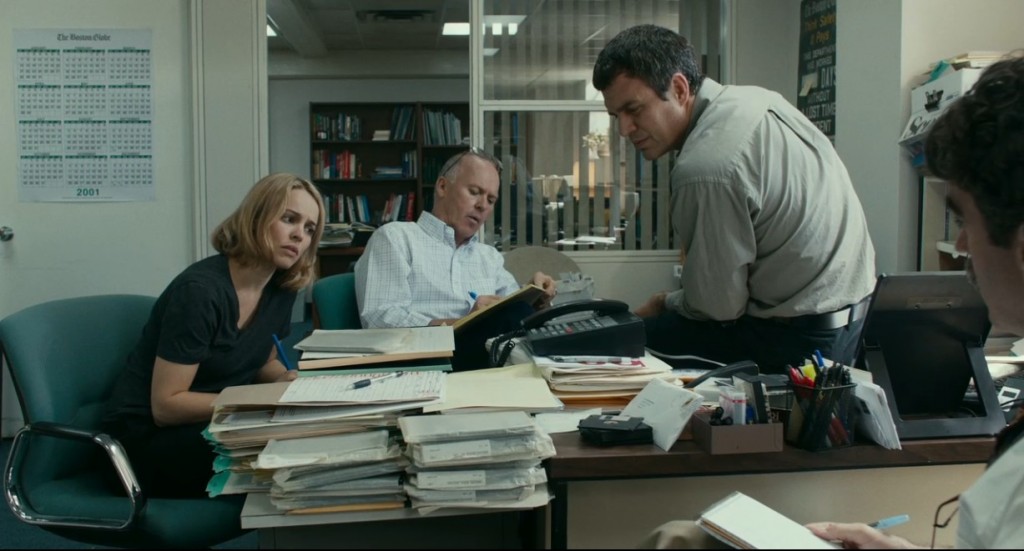 Like David Fincher’s Zodiac making it to television by way of House of Cards, Spotlight tells the true story of a Boston Globe special investigations team of reporters that uncovers an extensive corruption and abuse scandal in the Catholic church. Stars Michael Keaton (in a wisely subtle performance post-Birdman), Mark Ruffalo, and Rachel McAdams each connect with and commit to the material beyond their obligation to the script. The secondary performers are even better, with Stanley Tucci and Liev Schreiber being the standouts. With no romantic threads or suspicious b-stories to consider, the screenplay is reliant exclusively on the momentum of the investigation, and this laser focus is so tight and well-managed from script to edit because the filmmakers understand montage. Most importantly, though, Spotlight makes realistic reporting actually compelling, finding most of its suspense in the tense presentation of the scenes rather than the over-writing of them. Director Tom McCarthy’s previous film was The Cobbler, something deep from Adam Sandler hell, and it’s difficult not to write the director off for that offense alone. If he’s looking for artistic redemption, he’s found it with this effortlessly sharp, disciplined drama. 4 out of 4 stars. 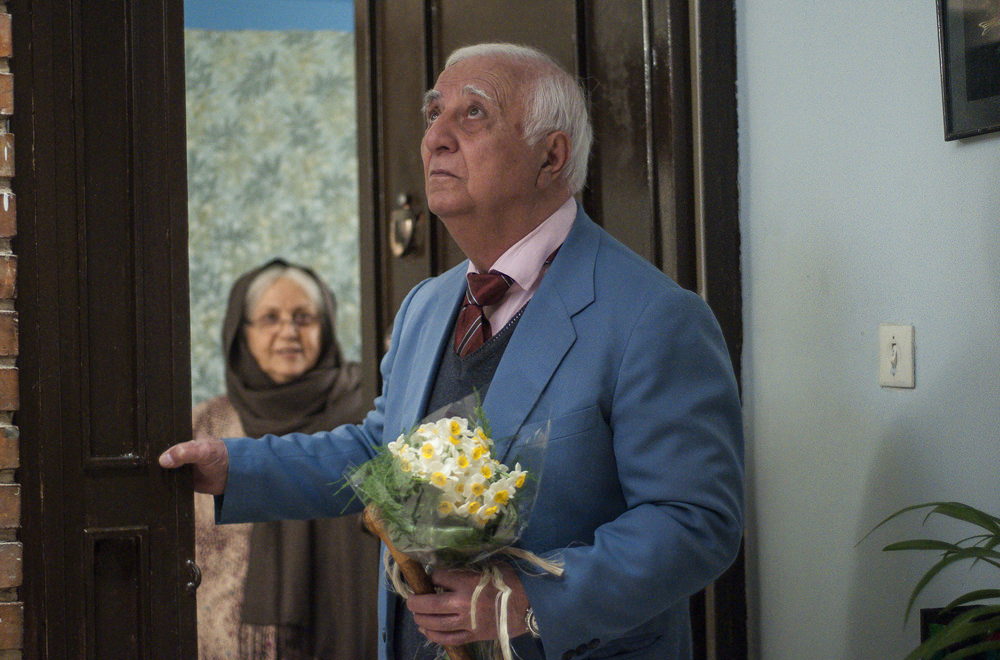 An elderly Iranian man (Souren Mnatsakanian) struggling with memory loss is invited to visit his son in Canada, but plans quickly deteriorate when he falls perilously in love with the young travel agent (Shadi Karamroudi) who has been tasked with arranging the trip. An indulgent opening act of social realism that borders on monotony gives way to something much more fluid – enthralling, even – with the arrival of the energetic Karamroudi. The ultra-refined style can have a lulling effect, but this is a narrative with rewarding, complex themes at its heart, and more to say – about loneliness, about loss, and about the permanence and impermanence of memory – than most romance films could dream of. 3.5 out of 4 stars. 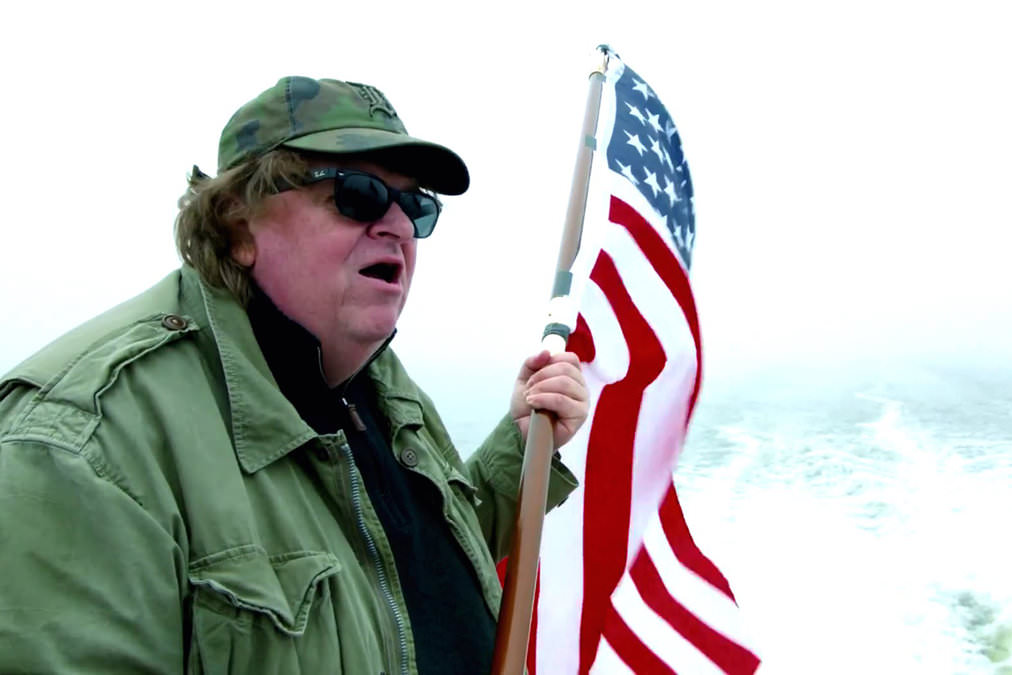 Where to Invade Next
Directed by Michael Moore
110 minutes

Michael Moore’s new doc begins with a silly conceit – that he’s been asked by the entire US Chief of Staff to invade European countries to take back the keys to making America better – but he means business with this well-leveled attack on inflated patriotism, national inaction, and the downfalls of the pro-revenue, anti-quality-of-life capitalist American dream. Moore doesn’t simply cite the excellent social services, employee pay, and medical care of Italy, or Finland, or Germany, or France as being inherently better than the United States – he’s careful to methodically demonstrate how these countries fought for their existing quality of life with large-scale protests in moments of national unity. Moore, represented as nothing more than a funny looking guy with questions, is the perfect host to this globe-trotting doc that’s, as an American, equal parts farcical and outright depressing. 3.5 out of 4 stars

END_OF_DOCUMENT_TOKEN_TO_BE_REPLACED
Taylor Sinople Picks: The 16 Best Films of 2016
Form and Function in Alex Ross Perry’s “Queen of Earth&...
Digging for Fire and Unexpected: Husband and Wife Process Parenthoo...
Every Thing Will Be Fine 3D Review