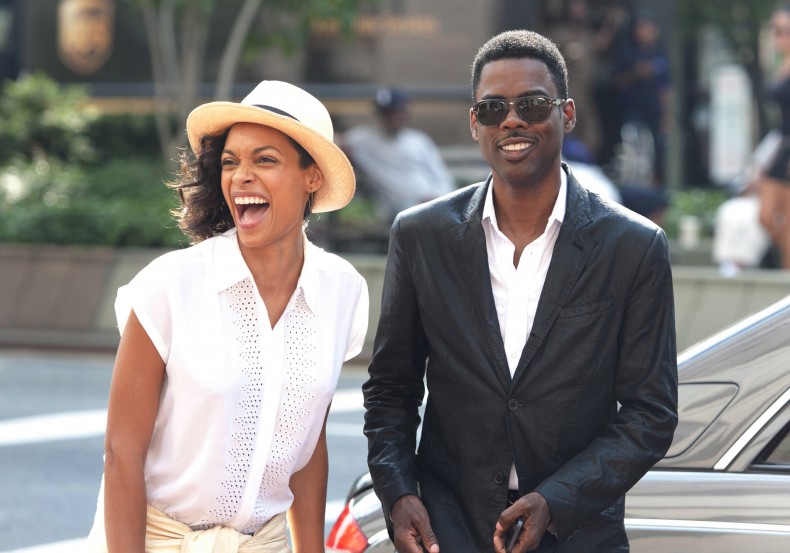 Overall Rating
7.5
7.5
Critic Rating
You have rated this

Chris Rock begins his newest directorial effort with a conversation between himself and Rosario Dawson, where she claims, “There isn’t always an underlying message, and sometimes a movie is just a movie.” Top Five is just a movie. There is not some grand underlying message, no hidden themes or messages. Top Five is like Rock’s unique stand up: a blunt and hilarious force which he wields with complete impunity.

Top Five revolves around Andre Allen (a slightly fictionalized Chris Rock), who is caught up in the current Hollywood whirlwind of movie premieres, paparazzi, and reality television. As a former comedian turned alcoholic wreck, then turned “serious” movie star, Allen is determined to trade in his comedy background for more sincere and “socially conscious” roles. Though he hates the paper for their critical panning of his films, Allen begrudgingly accepts an interview with a New York Times reporter, Chelsea Brown (Rosario Dawson). Although Allen is initially hostile towards Brown, the pair quickly bond over their combined achievements in sobriety. Hoping to tease out the real Andre Allen, Brown dispenses with formalities of standard journalism, and asks Allen what his “bottom” was. Providing an answer in the form of a hilariously-costumed flashback, Rock tells Allen’s story through glimpses into his private and public life, past and present, showing the deeply human nature of his lead character.

Rock’s film is intensely focused on the commonality shared by people. While much of the film is geared towards Rock’s penchant for comedy, Top Five is a deeply human film. In a conversation had between Brown and Allen, they discuss the various degrees of “minority status” that the future Presidents of the United States will possess. Gay Latino Woman? Check. A budget-balancing Asian? Check. An “out of the closet” disabled president? That might be going a little too far. While the final addition to Allen’s list gets him scolded by Brown for his closed-mindedness, their conversation serves as the basis for Rock’s philosophy on people. Black, White, Asian, straight, or gay, everyone has their own unique dreams and aspirations; ability aside, it is society that holds individuals back. To back his postulation, Rock populates his film with a diverse range of characters, from Brown, the unwed teenage mother with Latino heritage, to Allen’s wife-to-be Erica Long (Gabrielle Union), a black pop-culture icon standing in for Kim Kardashian. Rock allows the audience to sympathize with each of his characters, and although he vilifies some of their more dubious actions (like Long’s addiction to reality TV fame), he routinely admires their humanity (her heart-felt explanation of why).

Rock gives his film a frenetic pace, cutting quickly between past and present, and from location to location as Allen goes about promoting his terrible new film. Like sitting around the table at a loud and outspoken family dinner, Top Five is full of arguments, obscenity, obnoxiousness, and love. Rock employs his trademark acerbic wit to not only develop his own character, but to criticize contemporary society’s demand for fluff over content. At every stop along his press tour for Uprise, Allen’s biopic of Dutty Boukman, Allen is harshly prodded by media figures about a possibility of Hammy the Bear 4 (Allen’s trademark role as a crime fighting bear), and is constantly being berated by shouts “Hammy!” from his fans. The cultural obsession over Allen and Long’s wedding proliferates in all forms of media, a fact which Allen brushes off and largely ignores. Long is obviously more obsessed with her image and wedding than Allen or marital bliss. She meticulously plans Allen’s life from his strip-club bachelor party (complete with gift bags) to his outfit when he gets off of his private jet. A ridiculous regimen of nonsense that Allen must put up with constantly follows him as he deals with sobriety and his failing career – providing a force against which he must rebel or mock.

Rock has packed his film with, seemingly, all of the contacts he has made since he started in comedy nearly four decades ago. Sporting an incredible line up of stand-up comedians, from Brian Regan, Adam Sandler, and Jerry Seinfeld, to Bruce Bruce, Cedric the Entertainer, Whoopi Goldberg, and Kevin Hart. Some, such as Sandler, Seinfeld, and Goldberg play themselves: famous well-off comedians alongside Allen in the annals of comedy fame. Others, like Tracy Morgan, Kevin Hart, and Cedric the Entertainer play roles of varying capriciousness within Rock’s film. One of the most fluid scenes in the film has Allen bringing Brown to meet his friends for a pre-bachelor party get together. Insults and expletives fly through the room like a three-dimensional game of pong. Frank (Morgan) is an easy target for the group’s abuse, and can take it as well as he can give it. The friendship and camaraderie within the scene is palpable, as the rag-tag group of actors truly behave like a family. And this is precisely who Rock has decided to cast in his film; he fills his movie with his star-studded family. Each is repaying a favor to Rock, and all are perfectly happy to do so. Coming across like most appeared pro-bono (they almost certainly did not), their performances have a lightness and sense of joyful fun that pervades their characters or fictionalized selves.

A refreshing and thoroughly entertaining addition to Chris Rock’s (somewhat lackluster) directorial career, Top Five elevates its familiar plot with eclectic performances and solid humor. Featuring some unexpected appearances by comedians and actors in even more unexpected roles, Rock’s film is able to keep audience’s attention up, and keep itself away from clichés and plot holes.

Jordan Brooks is a contributor to several online publications, including his own blog focusing on streaming film. Being an avid lover of film, he has recently begun diving more deeply into film history; and is working towards becoming more educated in world cinema. He currently resides in sunny California with his girlfriend and their dog (although the real film buff in the family is definitely the dog).
You might also like
Rosario DawsonTracy Morgan

by Williamson Balliet on August 21, 2014
While watching “Sin City: A Dame to Kill For” it struck me that directors Robert Rodriguez and Frank Miller (again credited as co-directors) are completely unaware of the law of diminishing returns. There is a certain point in which adding more to a factor of a production will result in a decreased yield. In this […]
Comments
Leave a reply
Add Comment Register

END_OF_DOCUMENT_TOKEN_TO_BE_REPLACED
Taylor Sinople Picks: The 16 Best Films of 2016
Form and Function in Alex Ross Perry’s “Queen of Earth&...
Digging for Fire and Unexpected: Husband and Wife Process Parenthoo...
Every Thing Will Be Fine 3D Review