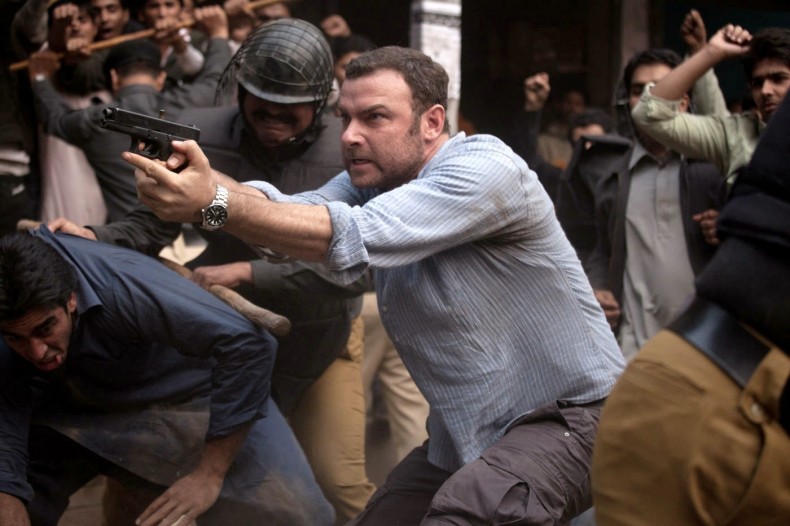 Most of the world is familiar with the so-called “American Dream”: you move, you build, you conquer, and hopefully, you succeed. Or something like that. What about other nation’s dreams though? “What is a Pakistani Dream; one that doesn’t involve immigration?”

This is the speech that Pakistani professor Changez delivers to his students as he informs them on non-violent protest. Changez knows about the American dream all too well, he also knows about the dangerous power of prejudice – he is being investigated in connection to terrorist activities

Indian director Mira Nair’s THE RELUCTANT FUNDAMENTALIST scrutinizes the American dream and the way that it can encourage the subduing of cultural identity. It’s a stark depiction of Patriotism-fueled prejudice with more than one source of potential, but some extraneous additions lead to something more muddled, overcrowded, and overly ambitious. It’s two-thirds of a great story.

Straight from the beginning, it’s clear THE RELUCTANT FUNDAMENTALIST is going to challenge our perspectives and hit us with some dense plot. The opening at a Pakistan market sets things off on the right foot by quickly throwing us into a foreign community in Pakistan – dancing and singing. Speaking to the density – much of the exposition is told in a 10-second shot of an FBI-style investigation board in which the camera pans over photographs and descriptions of characters. This is a crucial shot, one you ordinarily wouldn’t want to count on an audience missing – and it’s the first clue to the ambition that director Mira Nair has put into this film.

Things quickly ramp up as we witness an American being forcefully kidnapped, and someone’s office being torn apart by some shady miscreants, whether these events have anything to do with Changez is a mystery, as this is only a teaser – the film is told largely in retrospect as Changez retells his story of how he went to America and found not only the dream, but the nightmare.

Changez (Riz Ahmed) leaves Pakistan to attend Princeton University before being accepted into a prestigious New York City law firm as a financial analyst. Changez has only himself to thank for this, for he had neither money nor social status to help him – only his own intelligence and charisma. Changez says he loves America, and it’s true – it gave him the opportunities to discover success so far beyond what was available to him in Pakistan. Changez quickly impresses his quietly influential boss (Kiefer Sutherland), and falls in love with an American photographer (Kate Hudson) – the niece of the firm’s CEO, no less.

All of this would be amounting to a great American success story if it weren’t for one monumental event that brings about the turn in the film and in Changez’s life: the attack on the World Trade Center Towers on September 11th, 2001. We’ve covered this ground before in Kathyrn Bigelow’s ZERO DARK THIRTY, but while that film began with the tragedy as the catalyst for terrible people being stopped, THE RELUCTANT FUNDAMENTALIST uses it as the turn in which an entire race of people are assumed dangerous.

This quickly reverses Changez’s trajectory as he is caught in the middle of everything from casual prejudice to legitimate racism. In one disturbing sequence, he is pulled out of an airport terminal to be strip searched by the airport personnel – detained without reason. Seemingly overnight, simply existing as a Pakistani means the New York City public looks him at with fear and apprehension. Rather than push back directly against America, Changez instead embraces his Pakistani heritage – growing a traditional beard and eventually travelling back to Pakistan where he is targeted by federal agencies as a potential terrorist.

Based on the book by Mohsin Hamid, the aptly titled THE RELUCTANT FUNDAMENTALIST has some great attributes. Starring actor Riz Ahmed submits a performance that deserves to be talked about. His role as Changez is challenging, it comes with internal conflict as nuanced as external, and Ahmed’s range is outright impressive. Some of the secondary performances are great, too – similar to his role in Lars von Trier’s MELANCHOLIA, Kiefer Sutherland again nearly ducks out of being typecast as a gun-wielding federal agent by trading in the physical intimidation for a kind that comes from a very powerful man simply speaking.

So there’s the good, but this film comes with baggage, too. Kate Hudson as love interest Erica falls completely flat. The love, the attraction, the heartbreak, none of it is believable. Every note rings phony, it just isn’t working. Changez’s relationship with Erica takes up a good amount of time in the film and nearly every minute of it is wasted screen time. In addition to this faulty fuse in the plot, the film nearly drowns from the weight of its own overbearing message. It’s a heavy-handed documentary disguised as narrative entertainment. There are many great scenes, but these scenes don’t interact with each other in ways that craft a great movie.

Many may be offended by director Mira Nair’s bold attack of American patriotism and prejudices in relation to the 9/11 terrorist attacks, but it should be noted that there is a valid point here. It pains me to say between a convoluted love story, an exposé on the morality of financial analysis, the dangers of American xenophobia, and the limits and benefits of nationalism, that point is lost.

Taylor is a Chicago-based writer and aspiring film historian. He is the editor here at TFP, and has contributed to a number of international publications such as Cinema Scandinavia, PopMatters, and Room 101 Magazine. He can also be found listening to podcasts, researching topics he has little use for, or running after a city bus.
You might also like
kate hudsonriz ahmed

by Taylor Sinople on July 21, 2014
Stilted and unaffecting, "Wish I Was Here" is a disappointing sophomore effort from director Zach Braff.
Comments
Leave a reply
Add Comment Register

END_OF_DOCUMENT_TOKEN_TO_BE_REPLACED
Taylor Sinople Picks: The 16 Best Films of 2016
Form and Function in Alex Ross Perry’s “Queen of Earth&...
Digging for Fire and Unexpected: Husband and Wife Process Parenthoo...
Every Thing Will Be Fine 3D Review