Reviews
0
previous article
AFF 2014: Best of the Fest!
next article
Review: Hector and the Search for Happiness 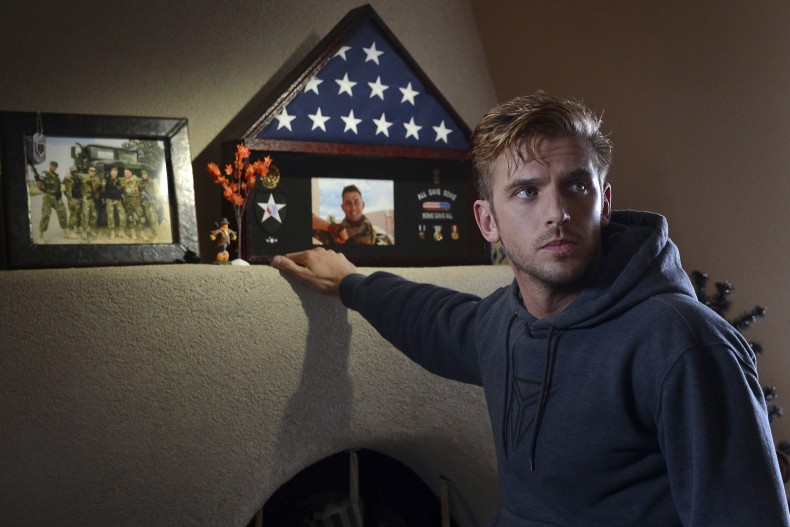 “The Guest” is another example of director Adam Wingard’s dynamic style, but the film relies too heavily on its 80s aesthetic to transcend the genre.

Independent horror has re-emerged as one of the most intriguing and surprisingly intelligent genres in the modern marketplace thanks to a handful of visionary new talents including Ti West, Joe Swanberg, and Adam Wingard, the mastermind behind “You’re Next,” which ended up being one of 2013’s best films after sitting on the shelf for two years. Wingard’s approach to horror is unlike any other director working today, and his new film “The Guest” continues to show the breadth of his capabilities.

Following the recent death of their oldest son, Caleb, the Peterson family is in a time of mourning when David (Dan Stevens), one of Caleb’s closest comrades, comes to their doorstep, bringing stories and words of love from their departed son. Caleb’s mother (Sheila Kelley) welcomes David immediately, but the other three members of the household – Caleb’s father (Leland Orser) and two younger siblings, Luke (Brendan Meyer) and Anna (Maika Monroe) – aren’t so hospitable.

As the days pass, David assimilates himself within the household, gaining the trust of each member of the family, conniving his way into offering their hospitality each night. His innocent smile and impeccable manners are of no immediate concern to anybody. As far as the Petersons know, David is their guardian angel sent to watch over them in this time of hardship. But when questions about David’s past begin to pile up, Anna and Luke take it upon themselves to find out who, or what, he really is.

Ripping a chapter from John Carpenter’s book, Adam Wingard and writer Simon Barrett craft an eerie, stylish, and consistently entertaining throwback to the heyday of action/thriller filmmaking lead by a commanding performance from “Downtown Abbey” star Dan Stevens. Shedding both his accent and pre-World War I persona, Stevens gives one of the year’s best performances as the mysterious but eerily likable David. Barrett and Wingard deliberately make David the most agreeable character in the entire film, so much so that his actions in the third act become even more of a shock despite his secretive and sinister behavior that is displayed in the film’s first hour.

Newcomer Maika Monroe is just as good, and plays the perfect foil to David’s calculated and ruthless demeanor. As Anna, she perfectly captures the spirit of the military town teenager who wants nothing more than to drive away and never look back, but stays behind for the sake of her family. Their scenes together are the best in the entire film, and one couldn’t help but wish she had more screentime, if only to see more of her character’s unique perspective on the microcosmic world around her.

Wingard and Barrett seem to be making a statement about the militarization of the United States, as well as their own perspective on the militarily-inclined nuclear family, but they never do so with an agenda to push. Rather, their approach allows them to make these statements through well-developed character work and a keen eye for mayhem that should delight fans of classic Carpenter action. There are many scenes in this film that arguably discuss the importance of self-containment within military experimentation, but the film never comes close to taking a didactic approach.

Additionally, “The Guest” is a film that requires its audience to go with the flow, accepting each plot twist, physical improbability, and logic lapse as all part of the fun. This works up to a certain point, but a third act reveal about David’s true identity is the film’s weakest moment, and seems like an unnecessary addition to an already well-crafted film that probably could have gone in a different and more effective direction. Interestingly, the reveal seems to have little to do with the rest of the movie sans the final shot, but it does give Wingard and Barrett an excuse to set their impressive third act showdown in the local high school’s fluorescently lit haunted house, so I suppose the end justifies the means.

Throughout his most recent films, Wingard has developed a distinct style that will soon make its way to the mainstream, but his reliance on constant homage is perhaps his greatest detriment. Earlier films like “You’re Next” worked because there was an original, modern style to them that, past the homage, could be taken on their own terms. “The Guest,” however, nearly requires that its audience be familiar with John Carpenter’s recognizable style, threatening to alienate anyone who isn’t already a fan of that genre. The result isn’t always what Wingard intends, but it’s his visual panache and Barrett’s writing that keep the film from crumbling under its own desire to operate parodically.

If you like your films to be bloody, funny, and drenched in neon, “The Guest” might be the best thing you’ve seen since “Drive.” All setbacks aside, “The Guest” is just further proof that Adam Wingard has a very firm finger on the pulse of modern horror, constantly working to turn unoriginal concepts on their heads to create something new and unexplored. Again, he succeeds, and it’s this passion for originality that makes “The Guest,” amidst a sea of generic horror films, a very welcome surprise.

Josef Rodriguez is a writer, filmmaker, and musician living in New York City. He is often labeled as "that guy who didn't love Boyhood" and he finds himself liking Harmony Korine films more than he likes his own friends. When he's not stressing over turning in reviews on time, Josef can be seen playing guitar, watching "Spring Breakers," or trying to write the next great American movie.
You might also like
Dan StevensLance ReddickMaika Monroe

by Jakob Johnson on September 21, 2014
“A Walk Among the Tombstones” is a throwback to hardboiled detective stories of yore that does nothing but a disservice to those stories with bottom-of-the-barrel cliches, lazy storytelling, and unfocused direction.
Comments
Leave a reply
Add Comment Register

END_OF_DOCUMENT_TOKEN_TO_BE_REPLACED
Taylor Sinople Picks: The 16 Best Films of 2016
Form and Function in Alex Ross Perry’s “Queen of Earth&...
Digging for Fire and Unexpected: Husband and Wife Process Parenthoo...
Every Thing Will Be Fine 3D Review