Reviews
3
0
previous article
10 of the Best Debut Films by New Directors
next article
Double Exposure: X-Men: Days of Future Past

Review: The Two Faces of January 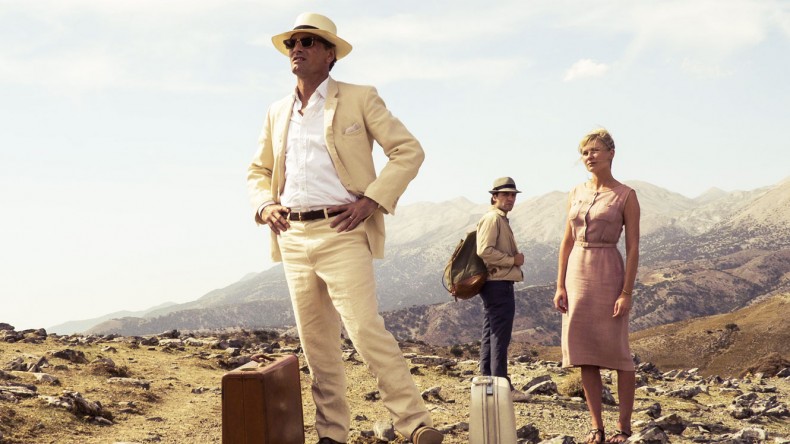 A dangerous game of stealth and dishonesty ensues between an American con man, his wife, and an inscrutable stranger in Hossein Amini's Hitchcock-esque "The Two Faces of January."

Following the success of the likes of “The Talented Mr. Ripley” and Alfred Hitchock’s “Strangers on a Train,” creating a worthy adaptation of another Patricia Highsmith psychological thriller novel seemed a difficult feat to accomplish. Talented screenwriter of “Drive” and “The Wings of the Dove,” Hossein Amini’s directorial debut appears to have paid off. Rich in atmosphere and cleverly executed, “The Two Faces of January” is a delicate balance of subtlety and ambiguity.

Set in the year 1962, the film centers on wealthy tourists Chester MacFarland (Viggo Mortensen) and his wife Collette (Kirsten Dunst) as they attempt to remain covert in the wake of Chester’s criminal acts of fraud. The film begins in Greece, opening with a picturesque shot of the Parthenon, with Athens serving as the primary backdrop of the story. In need of a translator and tour guide, they encounter the charming, enigmatic, and untrustworthy Rydal (Oscar Isaac) – a man with an eye for Collette. This meeting combined with an incident at a hotel sends the trio on a risky path to refuge. From here, the genre switches from a romantic tale between a rich couple, to a psychological thriller as the characters attempt to flee the country.

Amini evokes the glamorous aspects of the film with its truly stunning visuals. Cinematographer Marcel Zyskind does a fantastic job of capturing the beauty of Greece, including the port of Chania in Crete and the ruins of Knossos, the latter of which is superbly resonant of the crumbling relationships emerging before us. From the costumes to the props, everything is exactly what one would imagine for the early sixties – this is a world that completely engulfs you right from the opening scene. Alberto Iglesias’ score is very reminiscent of Bernard Herrmann’s scores for “The Wrong Man” and “Vertigo”, with its simplistic notes during quiet, atmospheric scenes, and use of frantic strings in times of peril.

The intricacies of the film focus on the two male leads, as their power struggle, sexual tension over Collette, and precarious dependence on one another is expertly performed. They are a convincing incarnation of two faces of the same coin, hence the title, as the Ancient Roman God Janus (January) is commonly depicted with having two faces. This deity represents new beginnings, travelling, and transitions – all of which are common themes that are cleverly woven throughout the story. As the film progresses, their expressions, clothing and motives become increasingly intertwined, creating a complex father-son conflict between the two. Rydal is just as deceptive as his counterpart, as he skims the money of tourists by exchanging their dollars for drachmas, and keeps the reasoning for detesting his father a secret. They walk side-by-side, queue in lines parallel to one another, and always sit opposite each other. This powerful imagery of two men fighting for dominance has the potential to create some intense scenes, and a firm sense of intrigue within the audience, all of which this picture has successfully accomplished. These themes of sexual repression via Collette, Rydal’s father issues, a tense score, and the vicarious locations that accompany the action, pay homage to the master of suspense Alfred Hitchcock and his intricate character-driven stories.

The film has a short runtime of only 96 minutes, leaving little room to flesh out the characters, and as a result doesn’t give us too much background information on any of them. This in turn doesn’t allow much room for sympathy, and the relationships can at times fail to draw upon the audience’s emotion due to its occasionally perfunctory execution. It could be argued that this gives more of an air of mystery to the film, although this can be an unpopular choice of direction with some viewers. The biggest flaw, however, is the seemingly rushed ending – in particular the slightly unbelievable final scene. This however is a nitpick, and the rest of the film more than makes up for these flaws.

“The Two Faces of January” is an excellent movie, and definitely worth a view if only for the central performances by Mortensen and Isaac. We never really know what is going through their minds, and the fashion in which their interactions intensify alongside the constant authority shifts between them are brilliantly gripping. It is certainly one of the more visually stunning films of the year, contrasting the sunbaked locations of Athens with the dingy underbelly of Istanbul, Turkey. Amini skillfully immerses his audience in the world of these characters in his respectable throwback to the works of Hitchcock. With its complexity, elegance, and subtlety, “The Two Faces of January” is a commendable addition to the compilation of Highsmith adaptations.

Jess is a 21 year old university student studying English Literature. Born and raised in England, she's an aspiring writer and film lover, with a strong affinity for cats.
You might also like
oscar isaac

by Taylor Sinople on February 23, 2014
Take half the stately period drama (but none of the enjoyment) of “The Kings Speech,” a generous helping of the illicit affairs of “Fatal Attraction,” and a pinch of romance with “Twilight”-level depth, and condemn it all to the dreariest sound stage in England and you’ve arrived at “In Secret”: an ode to passionless filmmaking […]

by Taylor Sinople on November 3, 2013
What else can you do but unconditionally love The Coen Brothers? So technically solid and creatively entertaining are their films that their involvement in a project is reason enough to check it out. They also have a peculiar habit of oscillating between dark, gritty genre pieces and oddball adult comedies. “No Country for Old Men” […]
Comments
Leave a reply
Add Comment Register

END_OF_DOCUMENT_TOKEN_TO_BE_REPLACED
Taylor Sinople Picks: The 16 Best Films of 2016
Form and Function in Alex Ross Perry’s “Queen of Earth&...
Digging for Fire and Unexpected: Husband and Wife Process Parenthoo...
Every Thing Will Be Fine 3D Review