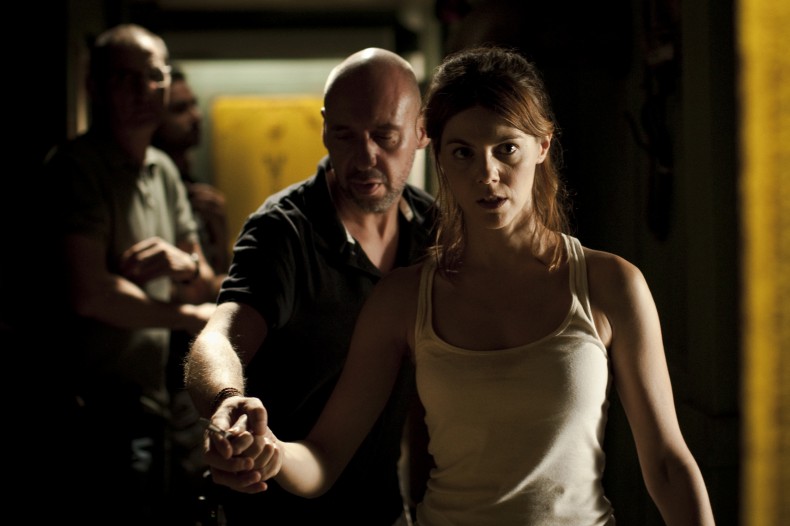 Drained completely of the innovation that made [Rec] a quintessential part of the horror genre, [Rec] 4 disappoints, making the death of the series very welcome.

[Rec] 4: Apocalypse is to the [Rec] series what Aliens was to the Alien franchise. The film unapologetically abandons the found footage, bare bones style of film making that gave the franchise its name, replacing it with the very tropes visible in your run of the mill, formulaic action flick.

The film continues from where [Rec] 2 leaves off. Angela and the infectious parasite within her are quarantined on a cargo ship with a group of mysterious doctors, sailors, soldiers, and the two soldiers that carried her out of the infected apartment complex. As one could probably predict, things end up going downhill from there, and our group of heroes are left fending for themselves against threats both paranormal and human.

[Rec] 4 should have been a great addition to the first three, a worthy finale for the likes of the first two films, even if the third wasn’t as good as it could have been. It checks all of the requisites for horror by retaining the claustrophobic setting of the first two films; the dreary cargo ship proves to be a formidable labyrinth for their fears, almost substantiated by a gruesome and almost too pulpy violence.

The mastery of found footage, which added that touch of primal humanity and realism-derived fear to the first two, disappears, and with it, so does the horror element. There’s no intimacy with the characters; there’s no real reason to care about any of the survivors. In fact, it’s quite the opposite dynamic in play here, where each and every one of the characters has faults past the point of redemption. On a similar note, despite the knell of its found footage aspect, the camera still shakes with a haphazard confusion that is even more frustrating to watch.

The film is wrapped in a Hollywood-esque gleam that seems to be enthralled by its cinematic value and, in doing so, renounced all subtlety. There’s not a moment of silence in the film, which is encapsulated constantly with the irritating screams and shrieks of the aforementioned characters, or the extremely out of place cacophonous soundtrack. There’s no build up, and because of that, there’s no reason to really feel any fear.

For about 5 minutes near the end, the film actually does make a turn for the better, as it adopts a “whodunnit” tension, comparable to The Thing, but this quickly dissolves back into the uninspired melody of people with guns shooting at the lifeless bodies of the undead.

Even with a seemingly larger budget, it seems like the acting somehow deteriorated. With the exception of Manuela Velasco as Angela, whose scenes alone were the only ones not entirely devoid of the sense of natural confusion and fear that the film so detrimentally falls short on, the rest of the cast seems fully aware that they’re in a horror movie. There’s a glimmer of boredom in each of the actor’s eyes, which drags the curtain of horror down around them; it’s obvious they’re not worried of their circumstances, and because of that, it’s hard for us to feel the same.

Still, despite all of these faults, mindless visceral violence will always bring some semblance of thrill, and [Rec] 4 will still manage to entertain somewhat. In terms of satisfying closure and the titular Apocalypse, however, [Rec] 4 provides none.

Jason is a high school student living in California who struggles to balance his grades and his passion for film. Aside from TFP, he writes about film for his local newspaper and manages his own website. When he's not watching movies, he can be found sobbing uncontrollably because of homework induced stress, writing unfinished screenplays, and talking to his girlfriend about nothing in particular.
Comments
Leave a reply
Add Comment Register

END_OF_DOCUMENT_TOKEN_TO_BE_REPLACED
Taylor Sinople Picks: The 16 Best Films of 2016
Form and Function in Alex Ross Perry’s “Queen of Earth&...
Digging for Fire and Unexpected: Husband and Wife Process Parenthoo...
Every Thing Will Be Fine 3D Review