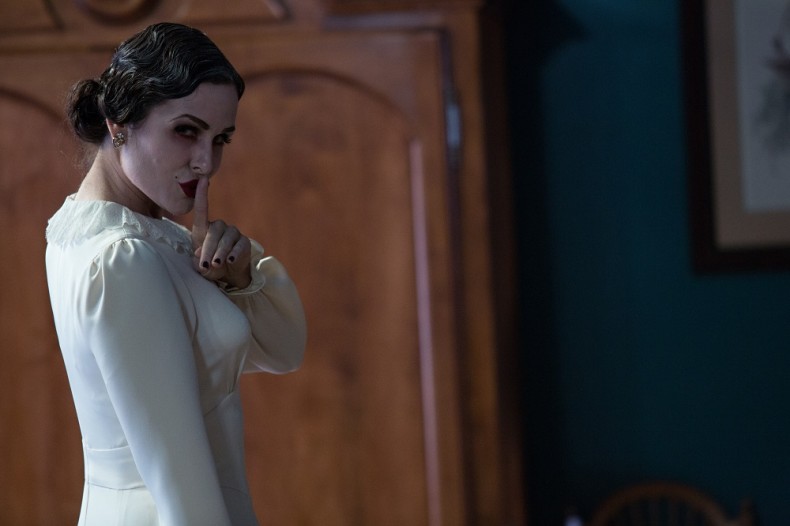 Bland and rehashed, “Insidious: Chapter 2” is an unnecessary sequel that lacks atmosphere and boasts cheap scares.

James Wan has had a big summer. The “Saw” helmer first put out “The Conjuring” a few months ago – a film I called a spectacular throwback to the genre’s best – and is now presenting the sequel to 2010’s “Insidious” only a few months later. I had dreamed of Wan going two-for-two and accomplishing incredible things this summer, but the result is a vast gap in quality between the two films.

“Insidious: Chapter 2” is a modern-day haunted house horror movie that tracks a demonic presence’s increasingly violent attacks against the Lambert family. As the supernatural occurrences escalate from creepy coincidences to outright assaults, Renai Lambert (Rose Byrne) begins to suspect her husband Josh (Patrick Wilson) has been directly affected by the haunting. With the help of a paranormal expert (Steve Coulter) and two amateur ghost hunters, Renai races to find a way to confront the demon before it succeeds in killing her family.

For a story that is at least somewhat interesting, this thing sure does step off on the wrong foot. As is tradition in contemporary horror, “Insidious: Chapter 2” opens on a brief prologue sequence that flashes back to a very young Josh being interviewed by paranormal investigators in response to strange experiences he’s been having as a child. The performances in this opening segment are the worst I’ve seen on screen this year. It’s so crucial to be able to buy a line like “There’s something in this house,” but the actors in this segment deliver lines in such a cheesy fashion that I was waiting for it to be revealed that this scene was some kind of satirical horror movie the real characters were watching on TV. But it just keeps going. When the title card appears 10 minutes in, I had already lost every point I had to give and the following 100 minutes did little to earn them back.

Unlike the hair-raising atmosphere of “The Conjuring”’s remote locale, “Insidious: Chapter 2” is bland and illogical. The modern world is established, but we spend the entire film in three or four very similar “spooky houses” that feel of an entirely different world than what we can glimpse just outside the windows. It’s not enough to simply photograph a well-designed set of a decrepit house and expect the audience to connect with the horror. Where is the house in relation to others? Where are all the cell phones? There are some pretty big issues with the use of a modern day setting in this movie that’s pulling 30-year-old tricks.

One of the very first scares comes from an investigation of some strange noises that lead the character straight to a bedroom closet. You know the rest: the doors slowly open, silence for a beat, explosive noise, someone bursts out of the doors. No turn-around on expectations, no inventive twist – it’s the same old “gotcha” stuff that’ll make your palms sweat during the viewing and be forgotten about upon exiting the theater. A great horror story should be on your mind while you’re tucked into bed that night – that’s the impact of accomplished atmosphere and mood. Scary is easy, creepy takes time and talent.

When it comes to technical production, “Chapter 2” is all over the place. Bizarre theatrical lighting washes characters in bright red or cyan blue light inexplicably, breaking immersion. Later, when some characters take a trip into “The Further” – a realm populated by the souls of the dead – the production design feels like a microbudget student film. Infinite black space with dry ice on the floor – emptiness until the characters stumble upon, what else, yet another spooky house to enter.

The redeeming points come far too late. So-so comedic relief is provided by the clumsy pseudo-badass ghost-hunting duo Tucker and Specs (Angus Sampson and Leigh Whannell). They add a lighter tone to the film – and even a couple genuine laughs – but are used completely sporadically. The intercutting of their hijinks into what is supposed to be legitimate horror ends up stifling both moods. Better, is an exciting montage in the third act that ties in events from the first film in the series. This brief ten-minute moment is original, worthwhile, and fun – the things Wan is known for – but everything around it is not. For a fleeting moment in that third act, this plays like a movie that deserves its place in the theater.

James Wan impressed the hell out of me with “The Conjuring,” and chapter one of “Insidious” was a very scary time. “Chapter 2” is a different story, and despite the respect I have for the director I can’t help but feel that this is an attempt to launch a new, profitable franchise at any cost. It’s a re-hash of the first film, and doesn’t move the genre forward or offer anything to challenge the audience with. I was asking myself “what’s the point” even before the final moments pushed the story towards a third film. That’s a scary thought.

Taylor is a Chicago-based writer and aspiring film historian. He is the editor here at TFP, and has contributed to a number of international publications such as Cinema Scandinavia, PopMatters, and Room 101 Magazine. He can also be found listening to podcasts, researching topics he has little use for, or running after a city bus.
You might also like
Angus SampsonPatrick Wilsonrose byrne

END_OF_DOCUMENT_TOKEN_TO_BE_REPLACED
Taylor Sinople Picks: The 16 Best Films of 2016
Form and Function in Alex Ross Perry’s “Queen of Earth&...
Digging for Fire and Unexpected: Husband and Wife Process Parenthoo...
Every Thing Will Be Fine 3D Review