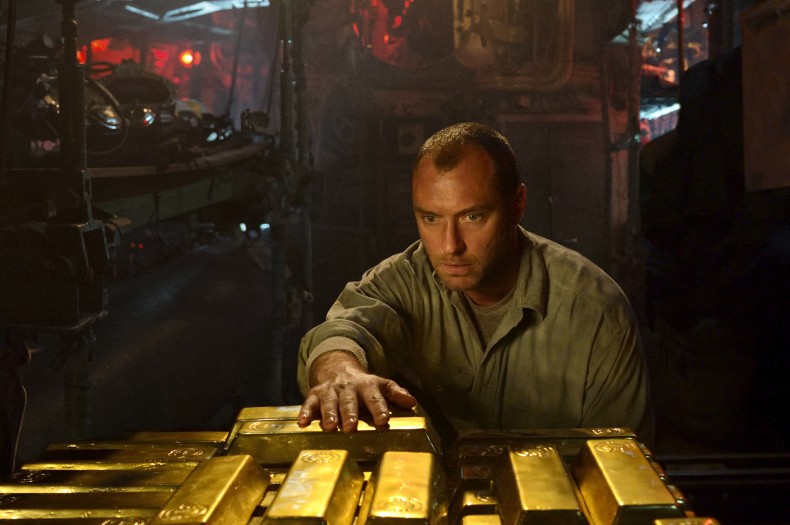 Black Sea, like the dark labyrinth of the submarine it depicts, shows occasional glimmers of gold.

Ah, money: the root of all evil, the source of all greed; we meet again.

Black Sea follows a group of men, who have all sacrificed their lives to their nautical professions, who submerge into the depths of the titular ocean in an attempt to salvage gold from the wreckage of a Nazi U-Boat. Led by exemplar captain Robinson and funded by a shady mogul, the submarine descends into the seabed with a crew of mixed characters of both Russian and English ethnicity. Slowly a number of problems begin to arise, and the seamen are forced to truly put a value on their lives, while combating an equally daunting racially-spurred segregation.

Within the claustrophobic confines of their battered old beauty of a submarine, director Kevin Macdonald evokes an uninvited dread. Utilizing to full effect the enclosed quarantine of the submarine, in all of its grand but paradoxically fragile beauty, the submarine truly becomes a character in its own. The lights illuminate the hallways in a beautiful showcase of neon colors, the blues and the reds and the greens stacked on top of each other like a rainbow, simultaneously foreboding the overarching possibility of death or wreckage.

And from this fragility and the sense of mystery that encircles the shadowy depths of the ocean, is a completely substantiated intensity. The film absolutely sucks the air out of the lungs, as every step, every rotation of the rudder takes the crew further into the unknown. Risks make themselves known within each and every scene, and a strong sense of anticipation slowly begins to formulate as the film progresses; it is absolutely breathtaking.

Yet, the trouble isn’t all posed by the exterior of the fortress, but also within. From the many variegated personnel within, come many characters, psychopaths inclusive. Black Sea really capitalizes on this looming, civil threat, creating an inescapable menace that lurks midst the ranks, endangering every life on board. In spite of this, the film never loses focus on the true enemy: human nature.

Black Sea not only thrills and captivates, but also illuminates the dangers of wealth. Through the good Captain Robinson, who is not unlike King Midas, you witness the effects that the mere possibility of money has, as well as the effects at getting back at all of those that wronged him. Sadly, the film tries a bit hard in trying to be pedantic, sacrificing an otherwise superb pacing for blatant and in your face attempts at sentimental flashbacks or symbolism. Sometimes, it works, but a majority of the time, it only succeeds in adding a layer of shallow reiteration that drones on and on ceaselessly. Still, Black Sea is a truly immersive piece of work, one that proves to be an incredible source of entertainment, even if its secondary objective of showcasing the effects of greed is a bit sub-par.

Jason is a high school student living in California who struggles to balance his grades and his passion for film. Aside from TFP, he writes about film for his local newspaper and manages his own website. When he's not watching movies, he can be found sobbing uncontrollably because of homework induced stress, writing unfinished screenplays, and talking to his girlfriend about nothing in particular.
You might also like
ben mendelsohnJude LawScoot McNairy

by Josef Rodriguez on August 21, 2014
Filled with gut-wrenching performances and not a hint of sentimentality, “Starred Up” is a raw, emotional journey into one of the UK’s most dangerous prisons.

by Taylor Sinople on April 7, 2013
To what extent are we a product of our environment? Of our upbringing? The Place Beyond the Pines is a gripping and remarkable crime drama from director Derek Cianfrance about the impact of father-son relationships and the unforeseen nature of tough decisions. It is nearly masterful. Cianfrance’s experience in quiet, intensely intimate dramas like 2010’s […]
Comments
Leave a reply
Add Comment Register

END_OF_DOCUMENT_TOKEN_TO_BE_REPLACED
Taylor Sinople Picks: The 16 Best Films of 2016
Form and Function in Alex Ross Perry’s “Queen of Earth&...
Digging for Fire and Unexpected: Husband and Wife Process Parenthoo...
Every Thing Will Be Fine 3D Review