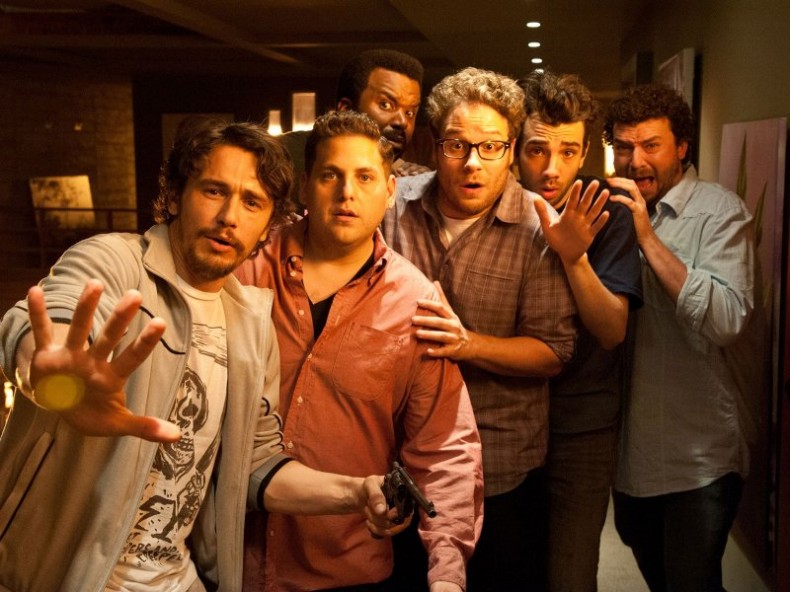 The result is a somewhat confusing effort. The problem stems from the fact that “This Is the End” never legitimizes the apocalypse. While the near-Hollywood grade special effects are surprisingly effective in the context of a comedy, the overall campiness renders any dramatic stakes invalid. The apocalypse is simply a vehicle in which to place these friends that make funny movies together. In this sense, fans looking forward to a genre-bender that attains the overall quality of “Shaun of the Dead” will be disappointed.

But hey, at heart this is a comedy – and the comedy of it is great. The rat pack that includes Jay Baruchel, Jonah Hill, Seth Rogen, Danny McBride, Craig Robinson, and James Franco each develop a self-deprecating, fictionalized alter ego as they extrapolate on the public opinion of their personalities and flaws (A cameo by a coked-up, sex-crazed Michael Cera is perhaps some of the funniest material in a slew of seemingly endless cameos). Together, they are a misfit gang of best friends that find the hilarity in every new disaster.

In one sequence, the group stands in a circle examining the revolver – their only real form of protection. Jonah Hill playfully tosses the gun around, pretending to shoot his friends while effeminately saying “bang, bang” while the others wince and yell at him to stop. The tone of bits like this so perfectly replicate what you have to imagine these guys would be doing with or without the cameras there.

With complete creative control given to writer-directors Rogen and Goldberg for the first time, this project has significant roots in vanity. When it comes down to it, the lack of a compelling story fails to hook any emotion beyond laughter. While the plot serves only to lay the groundwork for the dialogue-heavy comedy, it is nearly impossible to deny the utter likability of this brand of satire.

“This Is the End” isn’t the defining summer comedy, but is nonetheless frequently hilarious.

Taylor is a Chicago-based writer and aspiring film historian. He is the editor here at TFP, and has contributed to a number of international publications such as Cinema Scandinavia, PopMatters, and Room 101 Magazine. He can also be found listening to podcasts, researching topics he has little use for, or running after a city bus.
You might also like
emma watsonjames francojonah hill

by Taylor Sinople on June 25, 2013
We see the world as they do: rows of palm trees passing overhead from inside a convertible Porsche, nightclubs pulsing to the beat of the music, designer jewelry and clothing, pop music and drugs. To the group of Californian teenaged friends, it’s just another day in the life of the rich, not yet famous. But […]
comments
Leave a reply
Add Comment Register

END_OF_DOCUMENT_TOKEN_TO_BE_REPLACED
Taylor Sinople Picks: The 16 Best Films of 2016
Form and Function in Alex Ross Perry’s “Queen of Earth&...
Digging for Fire and Unexpected: Husband and Wife Process Parenthoo...
Every Thing Will Be Fine 3D Review