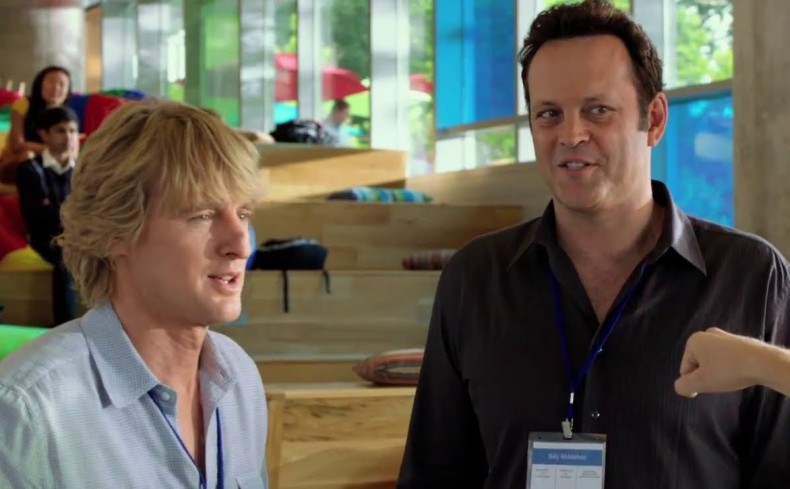 Reunited after going their own ways after WEDDING CRASHERS to various highs and lows (mostly lows), Owen Wilson and Vince Vaughn reunite in THE INTERNSHIP directed by Shawn Levy to take on a new challenge. This time it’s not an unwinnable girl, but a job – a highly competitive internship at Google. With enough clever moments to be worthwhile and the undeniable chemistry of the leads, THE INTERNSHIP isn’t nearly as tedious as similarly conventional comedies, but it won’t win any unexpected fans in the way that more inventive comedies can. It works, but just barely.

Billy (Vince Vaughn) and Nick (Owen Wilson) start the story as sales reps pitching a wholesale deal of wristwatches to a business owner only to discover they weren’t informed their business has shut down due to the irrelevance of watches in the modern age.

Out of work and tired of shuffling between various sales jobs, Billy submits an application to the Google internship program and ropes Nick into joining him. Designed primarily for college students with exceptional tech skills, Billy and Nick aren’t exactly the perfect guys for the job. In their interview with Google via Skype, they fumble with the video chat interface but make an impression nonetheless as a driven and passionate – if somewhat idiotic – duo.

Nick and Billy, of course, narrowly talk their way into the game-show-like internship program that is coordinated through a series of team challenges with the prize of full time jobs to the winning group. In this sort of evenly lit, PG-13, big name comedy it is refreshing to see a plot that revolves around some goal other than a woman (although an unnecessary sub-plot does see Nick attempting to charm a workaholic Google exec (Rose Byrne) who has no time for romance).

Taylor is a Chicago-based writer and aspiring film historian. He is the editor here at TFP, and has contributed to a number of international publications such as Cinema Scandinavia, PopMatters, and Room 101 Magazine. He can also be found listening to podcasts, researching topics he has little use for, or running after a city bus.
You might also like
max minghellaowen wilsonrose byrneshawn levy

END_OF_DOCUMENT_TOKEN_TO_BE_REPLACED
Taylor Sinople Picks: The 16 Best Films of 2016
Form and Function in Alex Ross Perry’s “Queen of Earth&...
Digging for Fire and Unexpected: Husband and Wife Process Parenthoo...
Every Thing Will Be Fine 3D Review