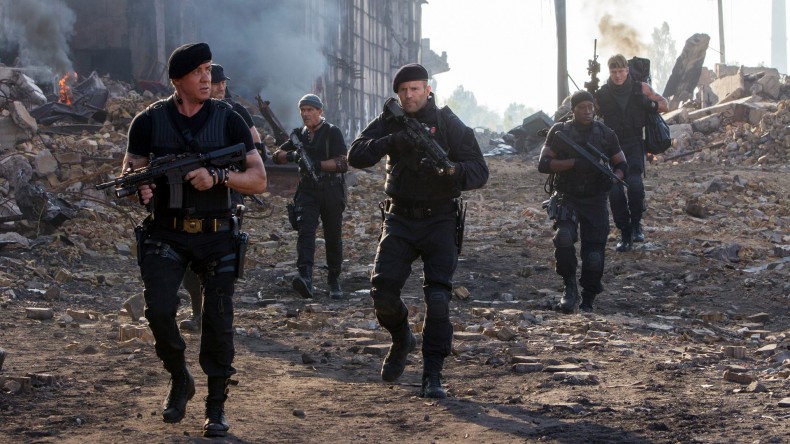 “The Expendables 3” is arguably the best film in the series despite its PG-13 rating, but it’s still too loud and too dumb to transcend the genre to which it pays homage.

The surprisingly steady stream of Stallone actioners that have hit the big screen since the late 1970s seemed to culminate with 2010’s “The Expendables.” Directed by the man himself, the original “Expendables” film married the old and new school of action filmmaking to create one of the most pants-wettingly exciting casts in the history of the genre. Unfortunately, the results were not as epic as expected, and it wasn’t until the ante was upped in “The Expendables 2” that critics and audiences alike began to take the franchise a bit more seriously.

In “The Expendables 3,” Barney Ross (Stallone) reunites with the remaining members of The Expendables, now a five man squad consisting of Ross, his closest partner Lee Christmas (Jason Statham), Gunner (Dolph Lundgren), Toll Road (Randy Couture), and Caesar (Terry Crews). The film opens in the middle of what appears to be a rescue mission. The target is an ex-Expendable, Doc (Wesley Snipes), who was captured and imprisoned for eight years by a heavily armored military convoy. The mission is a success, and Doc is given some new intel about their latest target, an international arms dealer who is later revealed to be Conrad Stonebanks (Mel Gibson), one of the Expendables’ founding members.

Unbeknownst to the rest of the crew, Stonebanks was once one of Ross’ closest allies, but after he was supposedly discarded by the CIA, he made it his mission to exact revenge on The Expendables no matter what the cost. Ross, who was convinced that Stonebanks had been killed, is left at a crossroads when their mission leaves Caesar in critical condition. Deciding to take matters into his own hands, Ross disbands his team and, with the help of Bonaparte (Kelsey Grammer), recruits a younger group of ragtag killers to take down Stonebanks’ operation.

Phrases like “just enjoy it for what it is” or “it’s not supposed to be art” were tailor-made for a film like “The Expendables 3.” At no point will any sane member of the viewing audience mistake this for highly stimulating or intellectual viewing, but that doesn’t mean it’s not a load of fun. From its opening moments, “The Expendables 3” seems determined to prove two things. One, that a PG-13 rating isn’t going to stop them from releasing the most violent film in the series, albeit one with nearly no blood, but one with a copious amount of flesh-slicing sound effects and a body count that rivals the Civil War. And two, that “The Expendables 3” is going to be the cartoonish, outlandish, and undeniably entertaining movie that “The Expendables” should have been. To save you the suspense, it succeeds on both accounts.

Sporting the most accomplished cast in the series’ history, as well as the most sure-footed script, “The Expendables 3’s” only real aspiration is to please. With excellent supporting performances by Kelsey Grammer, Wesley Snipes, and Mel Gibson, along with a supremely bizarre turn by Antonio Banderas, the cast is finally, after many years of trial and error, what keeps the movie afloat. Director Patrick Hughes is painfully aware of the fact that the thrill of shoot-’em-up action isn’t necessarily the pyrotechnics or fight choreography, though both of these are top notch here.

What makes action interesting is when it’s rooted in the characters. For the first time in the franchise’s history, The Expendables operate like a real team instead of a disconnected group of action juggernauts each fighting their own separate battle, while also engaged in a struggle against each other’s egos. The climactic fight sequences, especially, are some of the most impressively shot and choreographed I’ve seen in any recent American actioner. Whether that’s a testament to the performances or Hughes’ work behind the camera is up for debate, but something about this film, and the team, just clicks in a way that the other two didn’t.

However, “The Expendables 3” is guilty of not utilizing its cast to the fullest extent until the third act, as this installment is undeniably the Stallone-iest of the entire series. The Expendables’ leader gets more solo screen time than ever before, and while it’s completely warranted within the context of the story, there was a point in the film where “The Expendables 3” began to lose all sense of plurality. What keeps these scenes from becoming self-indulgent ego trips is actually Stallone himself, who reminds us why he was such an engaging screen presence in the first place. The script’s tendency to distance Barney from the rest of the team makes for some interesting internal conflict while also displaying Stallone’s acting chops for the first time in what seems like decades.

There’s no escaping the unnecessary and unfunny bro humor or perplexingly awful one-liners fed to nearly every member of the team, but it’s refreshing to see an action film where getting caught isn’t part of the villain’s plan and the script doesn’t concern itself with high-minded allegory or lofty themes of loss and regret. “The Expendables 3” caters to an audience ready to have fun, and those who are willing to succumb to it will undoubtedly have a great time. Calling “The Expendables 3” the best “Expendables” movie yet is akin to calling the Insane Clown Posse the best of all the carnival-themed rap groups, but in this case the compliment isn’t unwarranted, and shouldn’t necessarily be ignored. There are definitely worse ways to spend two hours. Put that on the DVD cover.

Josef Rodriguez is a writer, filmmaker, and musician living in New York City. He is often labeled as "that guy who didn't love Boyhood" and he finds himself liking Harmony Korine films more than he likes his own friends. When he's not stressing over turning in reviews on time, Josef can be seen playing guitar, watching "Spring Breakers," or trying to write the next great American movie.
You might also like
Antonio BanderasTerry Crews

Review: The SpongeBob Movie: Sponge Out of Water

by Marcus Michelen on February 8, 2015
"The SpongeBob Movie: Sponge Out of Water" is unfocused and overlong even though there are plenty of laughs to be had.
Comments
Leave a reply
Add Comment Register

END_OF_DOCUMENT_TOKEN_TO_BE_REPLACED
Taylor Sinople Picks: The 16 Best Films of 2016
Form and Function in Alex Ross Perry’s “Queen of Earth&...
Digging for Fire and Unexpected: Husband and Wife Process Parenthoo...
Every Thing Will Be Fine 3D Review