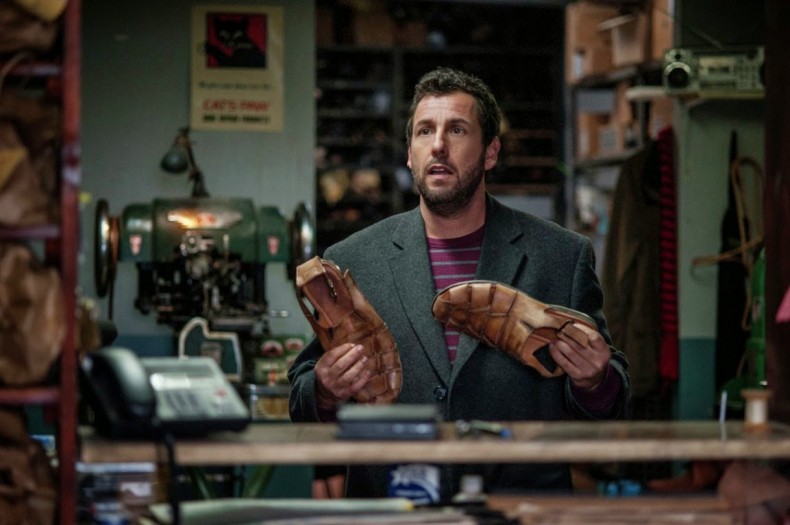 "The Cobbler" isn’t nearly as bad as it could have been, but it also has no idea what it wants to be either, and the results are mildly confusing to say the least.

The Happy Madison track record just continues to get worse and worse every year with some mild exceptions. Last year’s Blended was probably the most tolerable thing Sandler has produced in a while, but every one of his films just gets gradually dumber and dumber, existing only to remind us of the fact that, at one point, Sandler was really a funny guy. But even more than that, he had dramatic chops and could wrestle with the best of them.

A little glimmer of hope came about when Sandler was cast in Jason Reitman’s adaptation of Men, Women & Children. Although Sandler’s performance was legitimately one of the best things in the entire movie, Reitman’s adaptation completely bastardized its source material and, paired with Labor Day, effectively ruined much of the credibility he had built with his first four features.

Now, Sandler is giving it another go with The Cobbler, a fantasy-comedy directed by Tom McCarthy who, up to this point, has been a surprisingly reliable filmmaker. Although each subsequent film has become more and more sentimental than the last, McCarthy has held on to an agreeably low-key aesthetic that is, thankfully, at odds with some of his bigger budget work as an actor. McCarthy’s newest film, and first collaboration with Adam Sandler, is undoubtedly his least accomplished film to date, but it isn’t the unbearable trainwreck that some have declared it to be.

Sandler plays Max Simkin, a fourth generation cobbler in the Lower East Side of New York City. Living only with his increasingly senile mother (Lynn Cohen), and a barber next door named Jimmy (Steve Buscemi) who promised Max’s absentee father that he would keep an eye on his son, Max is beginning to wonder what the point of his life really is. However, while fixing some shoes for a local gangster (Method Man), Max is forced to use the downstairs machine when his suddenly blows a fuse.

While waiting for his customer to return, Max gets bored and tries the shoes on for himself, only to realize that he inhabits the physical features of the shoe’s owners as soon as he puts them on. Instantly, he remembers the machine and goes down to test it again. Low and behold, any pair of shoes that comes into contact with this magical machine gives Max the power to be anybody he wants.

On paper, The Cobbler seems like an enjoyable, inoffensive film with some decent laughs and a neat, tidy moral to wrap things up. The Cobbler could have probably been a modest success if it had decided to just be that film. McCarthy is no stranger to sentimentality at this point, and the film provides that in spades, replacing the crude, scatalogical humor that characterizes most of Sandler’s films. Yet, McCarthy is determined to make The Cobbler more than it already is. Suddenly, his film is a crime movie, it’s a superhero origins story, it’s a story about the New York City housing market. It’s so many things that it shouldn’t be, to the point where it’s rarely the thing that it actually is.

At the core, The Cobbler is a film about community. At the beginning of the film, Max is disconnected from everyone around him, and being able to literally become other people offers him the opportunity to meet and connect with others in a way he normally wouldn’t. One scene where Max watches the news and recognizes a number of people he sees on TV is one of the most genuinely heartwarming moments in the film.

Unsurprisingly, it’s one of the few emotional beats that hits exactly how it should, because it is simple and unconcerned with proving itself to be something more thematically or philosophically complex. The real hypocrisy of this comes when McCarthy is forced to deal with the consequences of Max’s actions: he doesn’t. McCarthy is content to raise some of these hard-hitting questions (one of them being, “if you kill someone in somebody else’s shoes, did you still kill them? Are you still responsible?”) without giving even a moment’s thought to answering them.

If there’s one thing to be said about Sandler’s Happy Madison comedies, it’s that they know exactly what they are, and they strive to appeal to a demographic that enjoys their low-brow humor. Turning on a Happy Madison film means knowing what you paid for, and Sandler is content to leave it at that. McCarthy’s film, on the other hand, refuses to play to Sandler’s strengths, forcing him into unfamiliar territory that doesn’t do him or the film any favors. What McCarthy doesn’t seem to understand – and what Paul Thomas Anderson did when he made Punch-Drunk Love – is that Sandler has the ability to establish this instantaneous connection with his audience.

He has a sweet face and a soft voice, a mild-mannered sensibility about him that’s extremely agreeable. By using that as a foundation for the character, any director has the opportunity to manipulate the finer details however they want as long as the foundation stays intact. In The Cobbler, Max’s foundation is one of general malaise. There are glimpses of the Sandler that we’ve come to know and love, but McCarthy is constantly throwing the character into situations that he isn’t equipped to handle, and the character arc often feels unresolved in more ways than one, especially in relation to a subplot about Max’s father (Dustin Hoffman) who disappeared years earlier with no explanation.

That said, the transitions are seamless, and not only on a visual level. Every actor who plays one of Sandler’s avatars is flawless, with Method Man giving a particularly impressive performance as the first of Max’s many disguises. That aspect of the film is so polished and well-played that it’s almost surprising to see how sloppy the rest of the movie is. Like Max himself, the film mindlessly jumps from situation to situation. Most of what happens is really inconsequential until, in the final act, The Cobbler becomes a crime movie that barely features Sandler’s face.

In some ways, The Cobbler is a generic Sandler comedy with a predictable arc and a frustrating inconsistency. But, The Cobbler does have many redeeming moments that suggest a better, leaner film here and a script in dire need of a rewrite. I haven’t completely given up on Sandler like many others have. I still think he’s a hugely talented comedian with an opportunity to redeem himself. But, his time is running out, and hopefully a third attempt at a Sandler-renaissance really is the charm.

Josef Rodriguez is a writer, filmmaker, and musician living in New York City. He is often labeled as "that guy who didn't love Boyhood" and he finds himself liking Harmony Korine films more than he likes his own friends. When he's not stressing over turning in reviews on time, Josef can be seen playing guitar, watching "Spring Breakers," or trying to write the next great American movie.
You might also like
Adam SandlerDan StevensDustin HoffmanEllen Barkin

by Josef Rodriguez on May 26, 2014
Compared to some of Sandler’s recent work, Blended is a breath of fresh air, but it’s still not on the level of the comedian’s classic comedies.
Comments
Leave a reply
Add Comment Register

END_OF_DOCUMENT_TOKEN_TO_BE_REPLACED
Taylor Sinople Picks: The 16 Best Films of 2016
Form and Function in Alex Ross Perry’s “Queen of Earth&...
Digging for Fire and Unexpected: Husband and Wife Process Parenthoo...
Every Thing Will Be Fine 3D Review