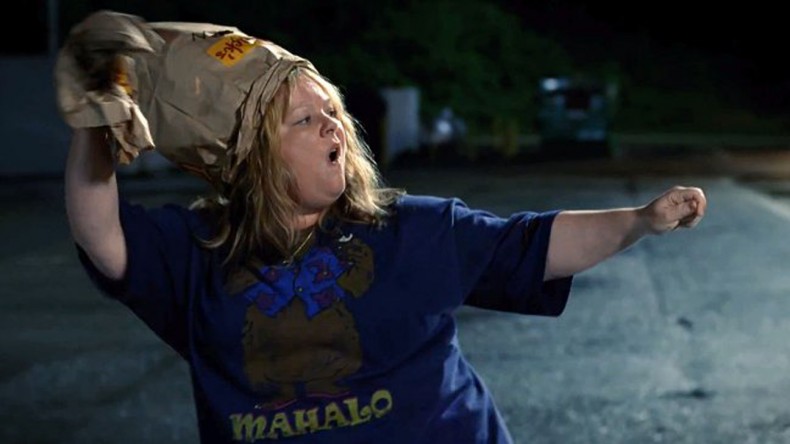 Thanks to sub-par execution, the most notable things about Melissa McCarthy's new comedy, "Tammy," are its many missed opportunities.

Despite my distaste for her shtick so far, I’m confident that she is an untapped well of comedic talent, waiting for the right opportunity to surpass the scourge of typecasting that followed her breakout in “Bridesmaids.” Co-writing a film with her husband, Ben Falcone (who also directs), seems as likely an opportunity as she’ll ever get; unfortunately, that isn’t what “Tammy” offers.

The film opens with a characteristically unkempt McCarthy as Tammy, singing “Your Love” with a mouthful of half-chewed Doritos. After briefly trying to give a deer mouth-to-mouth resuscitation, we see her entire life fall apart in rapid succession as she is fired from her job, her battered car dies in a plume of black smoke, and she walks home to find her husband eating an adulterous dinner with the neighbor (not a euphemism). What could have humanized the character and offered a sympathetic base for the audience to connect with is instead simply a framework for more her particular brand of brash, temper tantrum comedy.

Post-breakdown, Tammy decides to hightail it out of town. Leaving with her grandmother’s car also means leaving with her grandmother, Pearl, so Susan Sarandon takes her place in the passenger seat and they make for Niagara Falls. As with any road comedy, the destination is purely secondary, and their encounters along the way are meant to generate all the excitement. They don’t.

To try and pinpoint a single reason for the flop would excuse the mediocrity spread nearly across the board. The shining star of the movie is Sarandon, totally game as the devil-may-care alcoholic granny, even though she is blatantly too young for the part. Beyond the two leads, the cast splits the difference between underused or merely adequate (the exception being Falcone, but I’m a sucker for impotently over-serious straight men). The script plods along in its weirdly paced fashion, spitting out hackneyed jokes and setting up emotional conflicts that it can never successfully cash in on. A tepid romance subplot entangles McCarthy with Mark Duplass, but offers no chemistry between the actors. Falcone is noticeably wet behind the ears as a director; his shots are fairly bland and unadventurous, underselling some moments – like a car stuck in an impossible maze of trees – that had vast potential for visual comedy.

Early into their road trip, Tammy and Pearl share a scene in a bar where Tammy boasts that men are drawn to her “like flies on shit,” to which Pearl astutely replies, “You may want to start saying ‘like bees to honey.’” For me, that’s the perfect metaphor for McCarthy’s persona at this point. There are kernels of great pathos in her performances and somewhere out there is a movie that will allow her to drop the shield of crudeness, or at least use it in a more dramatically effective manner. “Tammy” isn’t that movie; even if McCarthy is more honey than shit by the end, that’s still only as much of a compliment as it sounds.

Although I don’t believe that it could have ever been a great film, most of the problems with “Tammy” come from the execution. McCarthy’s rising star isn’t the only byproduct of “Bridesmaids”; we’ve seen a great number of female-driven comedies in its wake. It’s a positive trend – a breath of fresh air in an industry (and genre) that has been dominated by males for so long – and, to the film’s credit, “Tammy” fits that bill. In fact, it may be the most significant inversion to date of the oft-discussed Bechdel test since, like Duplass, most of the male characters exist solely as the less interesting half of a romantic pairing. Perhaps the best hope for the film is for it to be another stepping stone in the path to a new comedic landscape, critical panning be damned.

Zack is a software developer from Halifax, Nova Scotia moonlighting as a cinephile - until the weekend, when those roles reverse. He can often be found thoughtfully stroking his beard or thoughtfully stroking his cat. Despite remaining in the sitting position almost exclusively, he occasionally makes time to be bent into other shapes during jiu jitsu practice. You can aggresively shout your opinions and objections at him via Twitter or in person (anywhere beer is served).
You might also like
Mark DuplassMelissa McCarthytoni collette

by Josef Rodriguez on March 1, 2015
Although The Lazarus Effect has a very strong first half, it quickly devolves into a subpar horror thriller, led by an overqualified cast with an underdeveloped script.

by Taylor Sinople on May 18, 2014
"The One I Love" is a smart and unique twist on romantic comedy that shows promise for director Charlie McDowell despite a disappointingly conventional ending.
comments
Leave a reply
Add Comment Register

END_OF_DOCUMENT_TOKEN_TO_BE_REPLACED
Taylor Sinople Picks: The 16 Best Films of 2016
Form and Function in Alex Ross Perry’s “Queen of Earth&...
Digging for Fire and Unexpected: Husband and Wife Process Parenthoo...
Every Thing Will Be Fine 3D Review