Reviews
1
0
previous article
A Fresh Look At: My Own Private Idaho (1991)
next article
Review: We Are the Best! 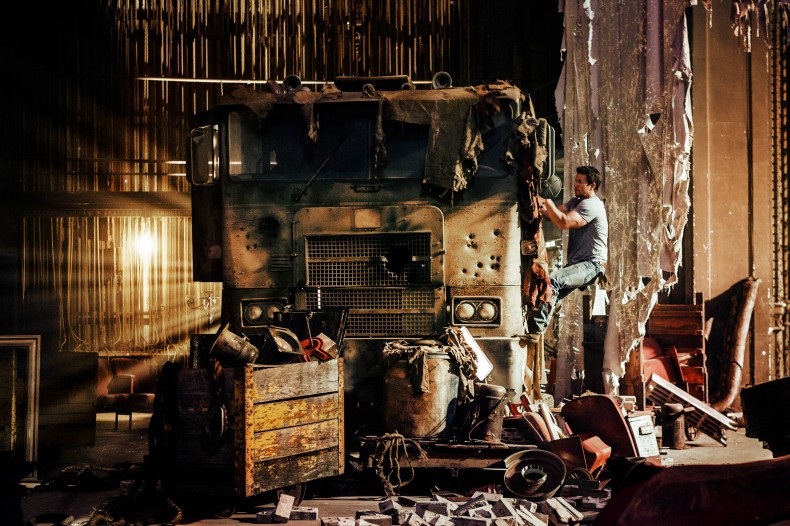 Although "Transformers: Age of Extinction" is arguably the best installment in the series since the 2007 original, it's still a maddeningly long, shallow, and incoherent extravaganza that benefits slightly from a new cast of characters and the series' most gratifying action sequences.

Michael Bay sure loves to destroy cities. The director’s fourth installment in the ludicrously profitable “Transformers” series, subtitled “Age of Extinction,” which picks up four years after the climactic battle of Chicago feature in “Transformers: Dark of the Moon,” finds an entirely new cast of characters battling for the fate of the human race once again. This time, the Autobots are fighting in Hong Kong against a seemingly unstoppable force known as Lockdown (voice of Mark Ryan), a Transformer bounty hunter recruited by an elite CIA unit known as Cemetery Wind, which was created by agent Harold Attinger (Kelsey Grammar), to hunt and kill all remaining Transformers left on Earth.

Unfortunately, there are only a handful of Autobots, led by Optimus Prime (voice of Peter Cullen), left to defend Earth. They’re accompanied by Cade Yeager (Mark Wahlberg), a Texas-based inventor who finds Optimus hiding out in a dilapidated movie theater while looking for cheap junk to repair, as well as Cade’s daughter Tessa (Nicola Peltz) and her boyfriend Shane (Jack Reynor), whom Cade is meeting for the first time. They also enlist the help of Joshua Joyce (Stanley Tucci), a brilliant inventor who was able to harvest the metal that is the lifeblood of the Transformers and turn it into a manipulatable element called Transformium.

Joyce and Attinger have been working together to create programmable Transformers to eliminate the Autobots, and it’s with the Transformium that Joyce is able to create Galvatron, an artificial Transformer that was designed using the data from Megatron’s severed head. However, when Joyce sees the independence of Galvatron’s mind, he begins to rethink the ethics of the situation and turns to Cade and the Autobots for help, especially after a nuclear weapon known as the Seed is passed on from Lockdown to Joyce and Attinger in return for assisting in the imprisonment of Optimus Prime.

Sound convoluted enough for you? Don’t worry, it is. Michael Bay’s fourth installment in the “Transformers” series is bloated as ever, stuffing enough ideas for three movies into an absolutely bonkers 165 minute running time. Almost none of the cast from the first three films has returned for “Age of Extinction” with the exception of Peter Cullen, who has voiced Optimus Prime since the original 2007 film, and that might not be such a bad thing. Bay unleashes his two greatest assets in “Age of Extinction,” and neither of them are created through digital robotics.

Mark Wahlberg, who took over for Shia LaBeouf after the studio wanted a new protagonist, embraces the insanity of the series in a way that LaBeouf never did. His work with Bay in 2013’s “Pain & Gain” was something of a revelation, and while his performance in “Age of Extinction” isn’t nearly as gratifying, it’s some of the best big budget work the actor has done in years. Wahlberg is one of the most credible actors in Hollywood right now, but his blockbuster fare has never been as good as his frequent collaborations with David O. Russell and James Gray, among others. Here, he finds a happy medium between the two, bringing the affable goofiness that has characterized his best independent performances while also switching gears to hero mode whenever the film requires.

The other surprise in “Age of Extinction” is Stanley Tucci, who quite literally walks away with the film. Tucci’s Joshua Joyce, who is responsible for delivering the best lines from Ehren Kruger’s nauseating script, brings some much needed wit and sleekness to the series. Regardless of how little Bay decides to actually utilize the actor, giving him a major supporting role, especially in the climactic battle, is enough for me to pray that he decides to reprise the role in the series’ fifth film.

It’s obvious by watching “Age of Extinction” that Michael Bay has actually regressed as a director. He continues to get our hopes up with legitimately good films like “Pain & Gain,” only to crush our souls once again as he reaches into a deep, dark bag of familiar tricks. Nothing in “Transformers: Age of Extinction” is something you haven’t seen Bay do a million times before, but I’d be lying if I said I didn’t enjoy this fourth installment far more than its two predecessors, which were abhorrent pieces of trash that bordered on entirely unwatchable far too much for me to consider them movies.

Walking into a Michael Bay film means preparing yourself for misogyny, racial stereotypes, corny humor, and complete and utter chaos. “Transformers: Age of Extinction” delivers all four of those things in spades, but the new cast of characters brings a surprising freshness to the series that it desperately needed to keep going. Alternately, Ehren Kruger’s scripts have gotten so unimaginably bad, that the “Transformers” franchise has successfully broken through to a whole new plateau of bad, one that induces enough utter disbelief to keep the viewers’ attention for the preposterously long runtime. Just to briefly emphasize how long this movie is, I’d like to point out again that this film is two hours and forty-five minutes long. When you factor in the time it takes to get to the theater, watch previews, and watch the film, that’s a four hour excursion to the local cinema. How any studio could realistically okay this runtime is beyond my comprehension.

Utilizing the wasted talents of DP Amir Mokri, Bay continues to shoot some of the lowest angles ever captured in American cinema. Dialogue between humans is over-saturated and scored to a distinctly patriotic soundtrack that becomes just as annoying as you think it would, while the action scenes are filmed with such precision and craftsmanship. You can practically hear Bay quietly masturbating behind the camera. I can appreciate that Bay refrains from using shaky cam to numbing effect, and some of “Age of Extinction’s” best action scenes are going to make timeless GIFs one day, but the noticeable difference in quality between Bay’s action and expository sequences further highlights his incompetence as a director.

Nobody in Hollywood shoots action like Michael Bay does, and this is neither a compliment nor a criticism. He’s one of the only blockbuster directors with a distinct style, and this is probably the only reason he’s still getting so much work. In terms of payoff, Bay knows exactly what the audience wants. But with each film he makes, the set-up and build to the payoff seems more like an obligation than an opportunity. Going back to the first feature film Bay ever directed, 1995’s “Bad Boys,” there’s an obvious focus on developing the relationship between the film’s two leads, which then heightens the stakes for the film’s climactic shootouts. In “Transformers: Age of Extinction,” it’s obvious that Bay has no interest in developing the human protagonists, resulting in some of the most dispensable characters ever put to screen. Thankfully, the surprisingly competent performances are able to bring a little personality to the Autobots’ human counterparts, but I dare not think of a world where this was not the case (see: “Transformers: Revenge of the Fallen”).

Another point of contention with the “Transformers” films is the series’ confused politics, which have always been endorsed by the US military but continually portray them as more and more corrupt with each subsequent entry. At this point, Bay paints every single government character in the film as a baby-killing, blood-sucking beast with absolutely no conscience. The one character who does have some discernible depth to him, a Cemetery Wind field operator played by Titus Welliver, seems to be motivated by the death of his sister in the battle of Chicago, but often does things with the intent of harming as many people as possible.

What ever Bay is saying, or trying to say, it serves the franchise no purpose other than to further convolute the relationship between the Transformers and the humans, which is much more interesting when in relation to the film’s subtitle, “Age of Extinction.” The title refers to the fact that, according to the movie, the end of the Mesozoic Era was actually caused by the invasion of Transformers. The film also brings up the age old philosophical debate, “can machines think?”, which was the basis of Wally Pfister’s criminally underrated “Transcendence” and Edgar Wright’s “The World’s End.”

Obviously, Bay doesn’t explore these themes as well as either of those films, but there’s a part of me that thinks a much better filmmaker could have created an avant-garde version of “Transfomers: Age of Extinction” that tracks the relationship between the Transformers and all the Earth animals it encountered, all the way up to the human race. The “Transformers” series is running out of ideas quickly, but it seems like Bay and his crew of otherworldly heroes are here to stay. If the series really wanted to go in a different direction, this would be a good place to start. Perhaps Terrence Malick could direct.

Josef Rodriguez is a writer, filmmaker, and musician living in New York City. He is often labeled as "that guy who didn't love Boyhood" and he finds himself liking Harmony Korine films more than he likes his own friends. When he's not stressing over turning in reviews on time, Josef can be seen playing guitar, watching "Spring Breakers," or trying to write the next great American movie.
You might also like
john goodmanKen WatanabeMark WahlbergStanley Tucci

by Taylor Sinople on November 3, 2013
What else can you do but unconditionally love The Coen Brothers? So technically solid and creatively entertaining are their films that their involvement in a project is reason enough to check it out. They also have a peculiar habit of oscillating between dark, gritty genre pieces and oddball adult comedies. “No Country for Old Men” […]
Comments
Leave a reply
Add Comment Register

END_OF_DOCUMENT_TOKEN_TO_BE_REPLACED
Taylor Sinople Picks: The 16 Best Films of 2016
Form and Function in Alex Ross Perry’s “Queen of Earth&...
Digging for Fire and Unexpected: Husband and Wife Process Parenthoo...
Every Thing Will Be Fine 3D Review