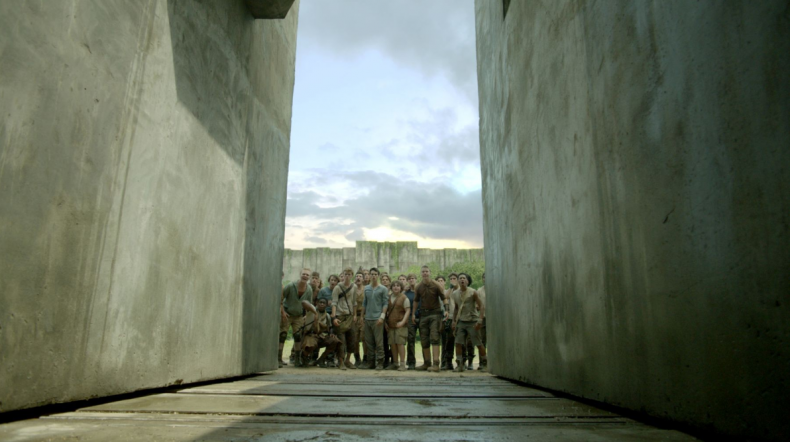 “The Maze Runner” is an extremely well-plotted, intelligent, and intense YA adaptation that ranks with “The Hunger Games” as being the best in the genre.

The YA adaptation craze that has invaded Hollywood may be a sign that the death of cinema is nigh, but Wes Ball’s filmic incarnation of James Dashner’s “The Maze Runner” may be the light at the end of a very long tunnel. An artificial landscape known as the Glade has been built in the center of a sprawling maze, one with mechanized doors that close every night at sundown. The Glade welcomes a new member each month, and this time it’s Thomas (Dylan O’Brien), a mysterious young man who enters his new environment with the intention of leaving as soon as possible.

Consulting with the different factions of the Glade – runners, harvesters, and the like – it’s decided that Thomas will become a runner after saving the group’s leader, Alby (Aml Ameen), from certain death at the hands of the Grievers, metallic hybrids that roam the maze at night and destroy anything with a pulse. Facing pushback from another of the Glade’s officials (Will Poulter), Thomas bands together with a small group of believers who find more in the maze than they ever expected.

With its animator-turned-director at the helm, source material that was already chomping at the “Hunger Games” bit, and a modest budget of almost $35 million dollars, “The Maze Runner” is not, by any means, a film that should work. However, against all odds, “The Maze Runner” emerges as the champion of the late summer, a well-made and thrilling sci-fi adventure film that, for the most part, disregards its status as a YA adaptation. Gone are the oddly-placed love triangles and incomprehensibly knowledgeable Marty Stu’s that arrive just in time to save the day.

In fact, for the better part of this film, Thomas is blamed, punched, and attacked into submission, often shouldered with the responsibility of telling everyone what’s going on when, in actuality, he knows just as much as they do. In turn, much of “The Maze Runner” develops organically, with a focus on character and story that seems to be absent from most other YA films. Instead of an obligatory pair of acts followed by a rushed, incoherent third, “The Maze Runner” ends up being one of the most expertly-plotted films of the summer with a damn near symphonic blend of nail-biting action and well-written and performed character moments that successfully build tension without boring the audience into the next scene.

Written by “Catching Fire” scribe Noah Oppenheim, as well as newcomers Grant Pierce Myers and T.S. Nowlin, “The Maze Runner” benefits from a refreshingly simple approach to its proceedings that allows the viewers to approach the material without fear of didacticism creeping up on them when they least expect it. Not busying itself with 9/11 imagery or strained thematics, the film functions as a suitably low-key adventure tale, one that could have been directed by Spielberg with a script from William Golding and Jean-Paul Sartre.

Its young ensemble does nothing but consistently impress throughout, and elevates some of the hokier dialogue from expositional to intriguing. “Teen Wolf” star Dylan O’Brien makes an impressive debut as leading man, while Will Poulter, who most viewers will recognize from “We’re the Millers,” takes a deliciously dark turn as Thomas’ adversary, while continually demonstrating his surprising range. The standouts among the film’s supporting performers are Ki Hong Lee, who plays the Glade’s premier runner, and Thomas Brodie-Sangster, who seems to be re-introducing himself to audiences after a focus on animated voice work and a brief stint on HBO’s “Game of Thrones.” For once, a YA ensemble is put to good use and the result is electrifying.

“The Maze Runner,” if nothing else, earns the unique distinction of being the year’s most surprising movie. Somehow, director Wes Ball has defied all expectations, producing the best film to come from the YA sub-genre thus far. In its final scene, “The Maze Runner” sets itself up for a massive universe expansion. If the film’s creators are able to pull off a couple good sequels, we might just have the best new adventure trilogy on our hands.

END_OF_DOCUMENT_TOKEN_TO_BE_REPLACED
Taylor Sinople Picks: The 16 Best Films of 2016
Form and Function in Alex Ross Perry’s “Queen of Earth&...
Digging for Fire and Unexpected: Husband and Wife Process Parenthoo...
Every Thing Will Be Fine 3D Review