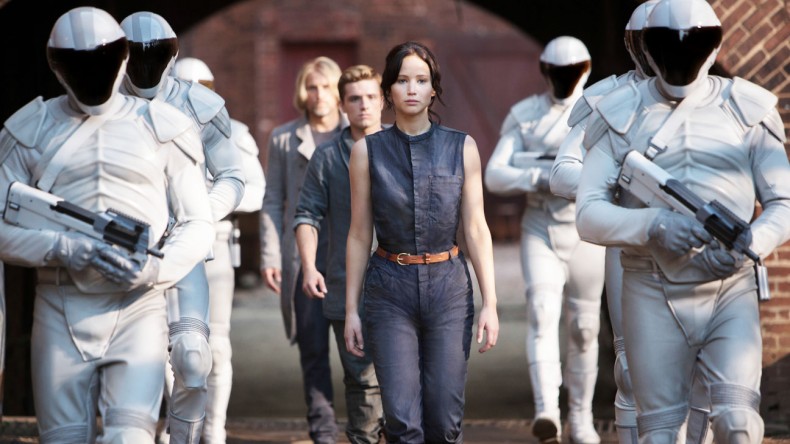 Based on the third and final installment of Suzanne Collins’ epic young adult trilogy, “The Hunger Games: Mockingjay – Part 1” starts right where “Catching Fire” ended, with Hunger Games champion Katniss Everdeen (Jennifer Lawrence) suffering from PTSD as she is brought to District 13. Here, she learns that her home, District 12, has been destroyed by the Capitol and the few survivors found shelter in this new and mysterious district that is ruled by President Coin (Julianne Moore), the leader of the rebellion. Together with Plutarch Heavensbee (Philip Seymour Hoffman), she convinces Katniss to be the symbol of the revolution, to be the Mockingjay. Together with the help of her best friend Gale (Liam Hemsworth), colleague tribute Finnick Odair (Sam Claflin), her loyal stylist Effie Trinket (Elizabeth Banks) and mentor Haymitch (Woody Harrelson), Katniss embraces the rebellion, but in the meantime, she is dead-set on rescuing Peeta (Josh Hutcherson) from the claws of President Snow (Donald Sutherland) and the Capitol.

This review of “Mockingjay – Part 1” is full of paradoxes, as is the film. On the one hand, this film is the perfect example of how a novel should be adapted. “Mockingjay – Part 1” stays incredibly true to the book, both in plot and in feel. Perhaps it is because this time, author Suzanne Collins does get an adaptation credit. Of course, there have been some changes and noticeable ones, too. But these changes have been made with the consent of the author and frankly, they were some of the best decisions in the adapting process. For example, Effie Trinket, a film favorite since Elizabeth Banks’ delicious portrayal in the first two installments, has returned for the third installment full-time. In the book, she is not mentioned until the final chapters, but in the film, the colorful stylist has been brought to district 13 as well. Effie lightens up the dark and somber feel of the film and makes for some hilarious remarks.

But on the other hand, “Mockingjay – Part 1” is one of the worst examples of how Collins’ novel should have been adapted. For starters, her novel has been split up into two films, following in the footsteps of “Harry Potter and The Deathly Hallows” and “The Twilight Saga: Breaking Dawn”. But after seeing “Mockingjay – Part 1” it becomes clear that this decision has not been one of creative interest, but solely a financial one. “Mockingjay” is beautifully and elegantly directed by Francis Lawrence (“Catching Fire”). Lawrence brings a certain stillness, a certain poeticism to the young adult franchise. An elegance that lacks in similar films from the dystopian genre, where the film focuses on epic fights and crashing explosions. With “Mockingjay – Part 1,” Lawrence focuses on the emotional side of the crashing and burning that comes with a revolution. He brings us an epic yet serious film that does not shy away from showing brutal reality. Whereas the first two “Hunger Games” films only showed glimpses of the true threat that is Snow and the Capitol, “Mockingjay – Part 1” does not apologize anymore. But that does not take away that the film is full of redundant scenes. Scenes that look epic and are visually stunning, but they do not add anything to the story – they have been put in the film as padding, to fill up two films instead of one. A thirty second sequence of an army officer walking away from a plane that is about to take off, does not add anything to the story of Katniss and the rebellion against the Capitol. Without these scenes, Collins’ novel could easily have been adapted into one single finale.

The directing and visual representation of “Mockingjay – Part 1” is both breathtakingly beautiful and terrifying at the same time. In both “Hunger Games” and “Catching Fire,” the film was shot with the Capitol’s perspective in mind. It is filmed the way the Capitol would broadcast it, the camera following Katniss and Peeta in the arena and the aftermath that followed. But with “Mockingjay – Part 1,” Lawrence changed his perspective. In this installment, the Capitol does not broadcast Katniss’ story – it is not meant for entertainment’s sake anymore. Lawrence changed his camera perspective to that of the rebellion, an everyman’s perspective. There is a shot of Coin’s speech, shot from the perspective of someone standing on the ground, looking up to his or her leader standing high upon the balcony. The effect of this, is that the viewer feels more part of what is happening. The viewer is not just bystander anymore, but feels like a part of the revolution.

Once more, Jennifer Lawrence is the beating and fiery heart of the film, as she had been in the first two installments. She carries this complex and dark film with so much strength and originality and reality. The perfect look of the film would have meant nothing if Lawrence had not delivered such an heart-wrenchingly honest performance. She does not shy away, she never holds back, she goes all out without ever being unbelievable or over the top. Katniss is a complicated and ambiguous character, but Lawrence portrays these emotions subtly and heart-felt. With only the subtle twitching of her hands and the panicked breathing as Katniss sees the smoking ruins of District 12, bones and mortar beneath her feet, is enough to convey the character’s shock and to move the viewer. Lawrence is the one who brings the revolution and she does it splendidly.

While Lawrence’s portrayal is impressive, Josh Hutcherson’s is equally disappointing. His character, Peeta Mellark, did not get rescued after the Quarter Quell in “Catching Fire” and thus he became a prisoner of the Capitol. For the greater part of Collins’ novel, Peeta is absent, apart from some frequent broadcastings of him being interviewed by Caesar Flickerman (Stanley Tucci). During these interviews, it became clear that Peeta was being tortured and brainwashed to hurt Katniss and in the books, these moments were piercing and unforgettable. Unfortunately, in the films, they had little effect and this was mostly due to Hutcherson’s disappointing performance. He did neither shock nor touch the audience, he merely let them know Peeta was still alive and catching up with Caesar Flickerman. Even Sam Claflin, whose character Finnick Odair only has two important scenes throughout the entire film, leaves a more rememberable impression than Hutcherson does. He touches the audience, as he gives a live broadcasted speech about the horrors of the Capitol, his voice strangled by pain and a harsh mask on his face, believable and moving. The problem with Hutcherson’s performance, is that he holds back. Peeta is being hijacked by the Capitol, tortured and brainwashed to the point of completely insanity. But Hutcherson does not take it that far, he plays it safe and that is monumentally disappointing.

But why did “Mockingjay – Part 1” fail to gross as much as its predecessors or other films in the genre? Perhaps it is because the audience is tired of final installments being unnecessarily split up into two parts for financial gain. With “Mockingjay – Part 1,” with its disappointing performances, redundant scenes, and useless padding, this idea clearly backfired.

Eden is a student, living in the Netherlands, dreaming of a journalist career. She writes, reads and spends a lot of her time at the local cinema - all in preparation for the previous stated career, of course. Apart from British drama series, writing novels and strawberry shortcakes, Eden loves everything about films: watching films, writing about films, discussing films at the dinner table… everything.
You might also like
Elizabeth BanksJena Malonejennifer lawrenceJulianne Moore

END_OF_DOCUMENT_TOKEN_TO_BE_REPLACED
Taylor Sinople Picks: The 16 Best Films of 2016
Form and Function in Alex Ross Perry’s “Queen of Earth&...
Digging for Fire and Unexpected: Husband and Wife Process Parenthoo...
Every Thing Will Be Fine 3D Review