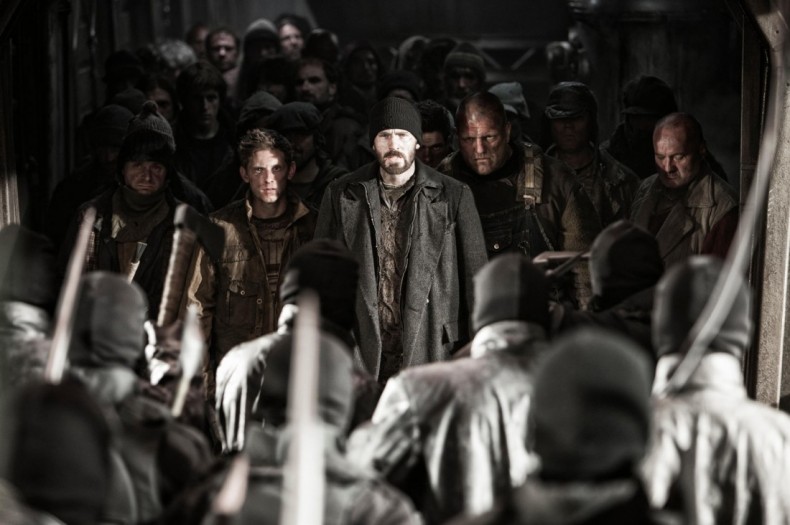 "Snowpiercer" is a dystopian adventure from Korean director Joon-ho Bong that entertains but fails to make a meaningful statement, as it seems to be striving to do.

“Snowpiercer” is a 2013 South Korean dystopian science fiction film about a world frozen over through a combination of climate change and bad decision-making. The world has been rendered uninhabitable, and now, the last of the human race is on a train that never stops, trying to survive. The train itself is heavily divided by class, with the inhabitants of the tail section living in squalor while the residents of the front coaches live in the lap of luxury.

The film begins in media res, following the protagonist – Curtis (Chris Evans) – as he starts to lead a revolution to try and take over the train. It is made clear from the outset that Curtis is neither the most competent nor most capable leader, but as the audience is shown the brutality of the regime controlling the train, the need for revolution becomes clearer and clearer. The revolution begins as the underclass living in the back of the train rises up and presses to the front, bent on overthrowing the conductor (Ed Harris).

The premise has a great deal of promise, and, to a certain extent, the film is able to deliver. There is a revolution filled with well-shot action scenes, and the setting more generally is extremely well done. The mechanics of a train rumbling across the world are well-used, and the film is creative with how it runs a train and what it can do with this particular setting.

What’s lacking, however, is any sense of a greater context. The audience is shown the president’s (Tilda Swinton) brutality, for instance, but no explanation for why she is evil. The audience is shown the squalid conditions the people of the tail section live in, but is given no explanation for why this would be the case if the goal is for humanity to survive. The film is essentially the story of a revolution that has no historical basis and could take place anywhere and at any point. It is a generic story of the proletariat rising up against the bourgeoisie. Despite the interesting premise, the plot itself lacks any real creativity, instead relying on the audience caring about the struggle of the oppressed to carry the film rather than anything particularly interesting about the plot or characters.

Indeed, at times, the plot is almost laughably generic, and this, too, hurts the film. When the revolutionaries stumble into a car serving as a school for the children, for instance, the film spends so much time ensuring that the audience is aware that every aspect of the ruling class is evil that the entire scene becomes laughable. When Curtis lays out why he’s a revolutionary to one of the men assisting him, Namgoong Minsu (Kang-ho Song), the story is so generic and so trite that the audience can’t begin to take it seriously as a motivation.

Equally, the film can’t seem to decide what it wants to be. Some of the action scenes are shot using shaky cam that shudders and makes it impossible to tell what’s going on. Other scenes are highly reminiscent of other Korean action films, such as “Oldboy” in their use of very clear, broad shots that focus on the protagonists’ every action. Indeed, in many cases, the protagonists themselves seem superhuman in their abilities, once again reminiscent of “Oldboy.” While a variety of shots in and of itself is not a problem, the trouble with “Snowpiercer” is that the different shots serve not necessarily to enhance the scene they’re depicting, but instead make it unclear or obscure the action entirely.

However, the acting is largely solid, and the characters interesting. Tilda Swinton’s bumbling president Mason is a special treat, and does wonders to characterise the ruling class of the train. Ed Harris’ Wilford, too, is well-done, performing his role in a muted but powerful way. Kang-ho Song and Ah-sung Ko, however, are the true stars of the film, filling every scene with their motivations, even when they say and do nothing. Their performances leave the audience wanting to know more about them and their world, and wanting to know what happened to bring them to this point. Unfortunately, the film does not deliver.

“Snowpiercer” is a mixed film. On the one hand, it is well-shot and fabulously well-designed. Every scene of the train builds up the world and makes it very clear what this place is and what it represents to the people on it. The action scenes are largely good, though with a few exceptions. On the other hand, though, the film fails to deliver on the tensions it builds up. It expects the audience to fill in much of the motivation and backstory, and instead delivers action scenes and explosions to make up for it. While this is not bad, it does make “Snowpiercer” a tad disappointing. What could have been an excellent exploration of class struggle and a fight for human survival in a post-apocalyptic world instead becomes a generic revolution without a particularly satisfying narrative behind it.

Janneke Parrish lives in South Korea where she struggles to order pizzas and consoles herself by watching far too many movies.
You might also like
Ed HarrisJamie BellJohn HurtOctavia Spencer

by Josef Rodriguez on March 15, 2015
"Run All Night" is a somewhat disappointing collaboration between Liam Neeson and Jaume Collet-Serra, who fail to recreate the compelling thrillers of their previous effort, "Non-Stop."
Comments
Leave a reply
Add Comment Register

END_OF_DOCUMENT_TOKEN_TO_BE_REPLACED
Taylor Sinople Picks: The 16 Best Films of 2016
Form and Function in Alex Ross Perry’s “Queen of Earth&...
Digging for Fire and Unexpected: Husband and Wife Process Parenthoo...
Every Thing Will Be Fine 3D Review