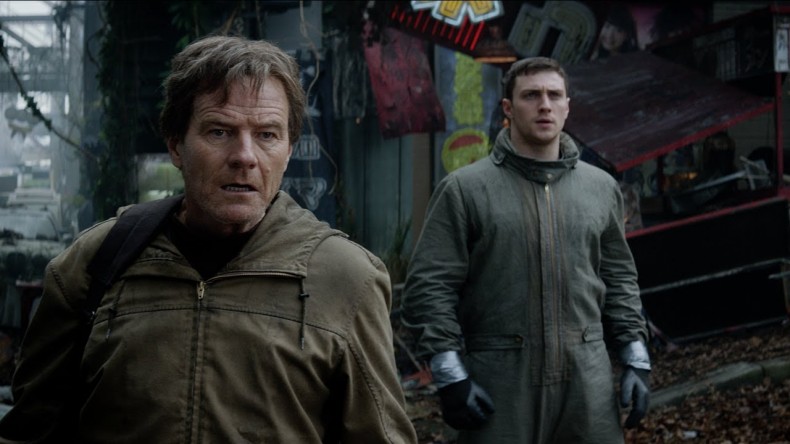 “Godzilla” has moments of greatness, but they don’t add up to create a wholly original or enjoyable viewing experience, especially for die-hard fans of the original film.

When Gareth Edwards surprised audiences in 2010 with his micro-budget sci-fi flick “Monsters,” the world was ready to see what he’d do next. It was both exciting and disappointing to see that he quickly attached his name to a major Hollywood commodity, especially one as sacred (and as recently defiled) as Godzilla. Godzilla is one of the only movie monsters everyone knows, and some of his more recent outings to the big screen have been less than successful. But it was hard not to be a little excited, especially when dealing with such a young and exciting voice in cinema.

2014’s “Godzilla” works as both a reintroduction to the character but also as a sequel to the original 1954 classic. In Edwards’ film, an American supervisor for a Japanese nuclear power plant named Joe Brody (Bryan Cranston), is driven mad after the death of his wife (Juliette Binoche) in a 1999 accident that leaves the plant flooded with radiation and completely demolished. His son, Ford (Aaron Taylor-Johnson), nearly abandons him years later to join the military as a bomb specialist and starts a family of his own in San Francisco, refusing to listen to any of the crackpot theories his father has spent the last 15 years compiling, searching for the true cause of the catastrophe at the plant. However, when Ford is forced to bail his dad out of a Japanese jail for trespassing onto a Quarantine Zone, he and a group of specialized soldiers are pitted against two radioactive monsters hellbent on destruction and, of course, the infamous Godzilla.

It’s interesting to talk to people about Godzilla, who is consistently labeled as a terror to humanity, one that lurks in the ocean and returns to land every decade or so to wreak havoc on the people of Earth. Anyone who considers themselves even a casual fan of Godzilla knows this is not true. The countless cartoons and B-movies may toy with the mythology every now and then, but what makes the character of Godzilla so fascinating to see on screen is that he is truly a force of good, returning to land whenever the human race needs to take care of the newest monster they’ve created. Thankfully, Edwards establishes this mindset early on in the film, and smartly refers to Godzilla more as a force of balance and order in nature instead of a monster or a creature. He isn’t Bigfoot or The Loch Ness Monster or some other bedtime story you tell your kids to scare them. Godzilla, like our military, is a necessary force to protect us from the evil that sometimes we, ourselves, have created.

Most fans know that Godzilla was created as a response to the controversy surrounding Japanese radiation poisoning following World War II. The various monsters that emerged from the ocean were viewed as a punishment, and Godzilla, another monster created by radiation, is our only salvation. Edwards’ film toys with that idea vaguely, presumably using the Fukushima disaster as a jumping point for the rest of the film, predicting that eventually the radiation (or in this case the monsters) will gradually move east to Hawaii and then San Francisco. Some more references to the ignorance of mankind and their abuse of radioactive materials would have been appreciated, but it’s obvious that Edwards understands and respects the material enough to create a film that is, at the very least, politically self-aware.

With his $160 million dollar budget, Edwards is able to go absolutely bonkers on the visual effects, and he most definitely does in the majority of the film. But it’s also refreshing to see that, for the film’s first 90 minutes, the camera is almost always turned on the film’s human characters. Bryan Cranston, in particular, brings a lot of humanism to the film that drives most of the first hour’s central emotional conflict. The film does suffer slightly when he is done away with at the end of the first act, and the dramatic scenes from then on are never quite as compelling as Edwards wants them to be, but it’s worth noting that the director does seem truly interested in his characters, and makes a point to accentuate their personalities whenever possible.

Unfortunately, these moments are too few and far between after the first act, and the film tends to veer off into the land of endless exposition by the beginning of its second hour. I’ve found that most major blockbusters from the past decade consist of two expository acts and one underwhelmingly action-packed act that threatens to send the viewer into an epileptic seizure. What separates films like “The Dark Knight” from the pack is the attention to detail and character that makes them so compulsively watchable. “Godzilla,” on the other hand, strives for this level of greatness, but is always just short of reaching it, due mostly to an infinite number of scenes that are just drenched in CGI, and an adequate-but-nothing-special performance from its leading man, Aaron Taylor-Johnson. Johnson’s career has been an interesting one, playing a variety of characters in the past few years, but never fitting into a role as well as he did in 2010’s “Kick-Ass,” which was the actor’s breakout performance. Here, he’s given little to do and often seems just the tiniest bit lost. While there are some touching moments between him and Cranston, he’s also surrounded by a host of more talented actors who serve to accentuate his weaknesses as a performer.

The film does benefit greatly from an absolutely flawless score by Alexandre Desplat, a man who is quickly establishing himself as being one of the most accomplished composers of his time, as well as the energetic and breathtaking cinematography by Seamus McGarvey, who captures the essence of every scene with his skilled camerawork. There are moments in the film, like the HALO formation skydive, where both elements come together in such a way that the result nears blissful.

When the film reaches its third act, most audience members will probably be fed-up with all the teases and glimpses Edwards peppers throughout the film. It’s for this exact reason that the final battle is just not as satisfying as it should have been. Besides being surprisingly short, Godzilla’s interaction with his foes seems oddly predetermined considering the circumstances. There’s no point at which one is left to consider whether or not Godzilla will come out on top. We all know he will, but I never heard the voice in the back of my head saying otherwise, the ounce of doubt that one finds in the greatest of action films. In “Godzilla’s” final showdown, I entered and left with the same notion in my head of, “Okay, here we go,” leaving the film in this strangely expository limbo that it never finds a way out of throughout its 123 minute running time.

Like Marc Webb’s “The Amazing Spider-Man,” the entire film feels like a build-up for a sequel that will then deliver on the goods promised in the first film. Introducing Godzilla at the end of the second act wouldn’t necessarily have been a problem had the third act been worth the wait. It’s just not. It’s a decent final battle, but it almost feels like warm-up for the real thing. And while the final move is nothing short of absolutely legendary, I left the theater not feeling triumphant that Godzilla had saved the day. Instead I found myself pitying the poor guy for having to constantly come up from the ocean and deal with our bullshit. Whether or not this is due to the film’s somber, quite nearly humorless, tone is probably something to consider, but the initial excitement of almost every scene in “Godzilla” gives way to something more contemplative and somber upon reflection, and not in the good way. I didn’t leave the theater with a glow, but instead with a sour taste in my mouth. Maybe it was all that radioactive sludge Godzilla sprayed everywhere.

Josef Rodriguez is a writer, filmmaker, and musician living in New York City. He is often labeled as "that guy who didn't love Boyhood" and he finds himself liking Harmony Korine films more than he likes his own friends. When he's not stressing over turning in reviews on time, Josef can be seen playing guitar, watching "Spring Breakers," or trying to write the next great American movie.
You might also like
Elizabeth OlsenGodzillaJuliette BinocheKen Watanabe

by Taylor Sinople on February 23, 2014
Take half the stately period drama (but none of the enjoyment) of “The Kings Speech,” a generous helping of the illicit affairs of “Fatal Attraction,” and a pinch of romance with “Twilight”-level depth, and condemn it all to the dreariest sound stage in England and you’ve arrived at “In Secret”: an ode to passionless filmmaking […]
comments
Leave a reply
Add Comment Register

END_OF_DOCUMENT_TOKEN_TO_BE_REPLACED
Taylor Sinople Picks: The 16 Best Films of 2016
Form and Function in Alex Ross Perry’s “Queen of Earth&...
Digging for Fire and Unexpected: Husband and Wife Process Parenthoo...
Every Thing Will Be Fine 3D Review