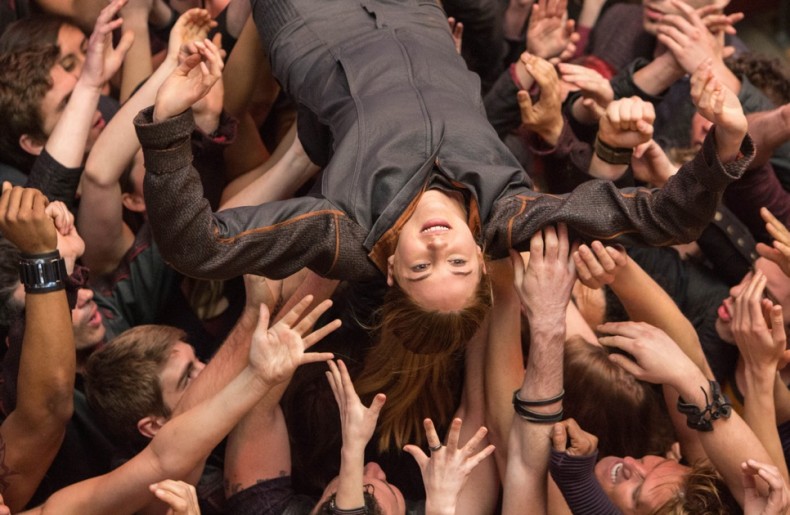 “Divergent” will bring on a serious case of deja vu, but still manages to be sweeping in its adventure fronted by Shailene Woodley’s committed performance.

In a Chicago-set dystopian future, society has broken up into five factions based on dominating personality attributes. The most intelligent go to “Erudite” and work to advance science and technology, while the brave spend their time policing the streets and leaping across building tops in “Dauntless.” Beatrice Prior (Shailene Woodley) was born into “Abnegation” – the faction for the selfless that live in poverty and take care of the homeless (the so-called “factionless”).

At a traditional ceremony at the age of sixteen, Beatrice is given an assessment test that declares her faction and she’s able to choose – stay with her family, or switch factions and leave them behind. But her results reveal she has not one dominating personality trait, but three: she’s divergent. This is bad. The government fears and hunts divergents, seeing them as a risk to the entire structure of the faction system. Beatrice keeps the information to herself, and at the ceremony chooses to join Dauntless – the “brave” class of teenagers that run around climbing and shouting things like “woo!” and “yeah!” to each other like the “elves with attitude” from “The Santa Clause.” At Dauntless, in a remote underground hideout, Beatrice (claiming the new name Tris) enters three rounds of deadly training and uncovers a conspiracy to overthrow the government that she, as divergent, may be the only one capable of stopping.

It’s generally a bit of a low blow to sum up a piece of art’s worth by comparing it to others, but “Divergent” is really asking for it. The first movie adaptation of Veronica Roth’s best-selling trilogy packs a surprising amount of talent into the young adult genre, but falls short of transcending its heavily lifted influences. It’s truly not all that reductive to suggest “Divergent” is little more than a mish-mash of the sorting ceremony from “Harry Potter” placed in the vaguely defined future dystopia of “The Hunger Games.” Then you add the “chosen one” plot of “The Matrix” and the kid-soldier training sequences and subsequent love conflict of “Ender’s Game,” and you’ve got a best-seller.

The set-up leaves too many questions from the very beginning as to why a government would ever think suppressing all traits but one in a human would lead to a productive society. They force segregation and develop a test that declares your faction, but then allows you to switch if you feel like it. They choose factions based on a few common-sense archetypal traits such as intelligence and bravery, but throw in the nonsensical “Candor” for people “that always tell the truth,” and “Amity” for the “peaceful.” The exposition sequence that opens the film is a giant “but WHY!” It’s a flawed set-up that stretches a rudimentary moral tale into two-and-a-half hours. And yet, “Divergent” entertains. How do you square being engrossed by a rip-off?

It may be that Shailene Woodley is just strong enough an actor to save it. Woodley was fantastic in “The Spectacular Now” and here works with co-star Theo James (who plays a Dauntless veteran named Four) to develop a love connection more organic and authentic than the stuff found in the genre’s current best (“The Hunger Games”). Woodley and James are working in the dramatic space despite the action setting. James is easily dismissed as a simple jawline (and he does end up with his shirt pulled off before it’s all said and done), but he works at a much higher level as a conflicted leader hiding sensitivity at all costs. The surrounding cast gives it everything they’ve got. No one (well, maybe Kate Winslet, whose generic villain material betrays her experience) is phoning it in.

A dilapidated Chicago stands in beautiful decay at the center of “Divergent.” The city has played host to a number of action movies in recent years (“The Dark Knight,” “Transformers 4”), but none have faithfully recreated and interacted with this many landmarks. The Sears and Trump Towers, Marina City, and the dried up Chicago river are all shown in the many ultra-wide helicopter shots (updated to the grim fantasy setting with CG), but other iconic sites like the Hancock Center, the El trains, and Navy Pier are actually integral components to the story. The pier is featured at length in a ten-minute “capture the flag” training sequence that sends Tris climbing up the rusted Ferris wheel.

The most impressive set pieces take place in the virtual reality simulator at Dauntless where Tris is put through visualizations of her greatest fears. These excursions into imagination and fantasy let a little bit of fun leak into what would be miserable as an ultra-serious reading of the material. Director Neil Burger’s best work was 2006’s period piece “The Illusionist,” but he seems well prepared to make this film after executing (to poor results) the adrenaline-fueled “Limitless” – a film about a pill that allows you to do anything. Combine the two tones, and Burger allows the audience to have enough fun with “Divergent” to hold back any passionate hate against it.

Still, it’s hard not to be angry at this much talent put to use in such a faulty premise, but fans of Roth’s 2011 novel that have already accepted the story will find nothing wrong with “Divergent” as an adventure movie. Even a hardened critic won’t have much trouble finding something of interest in a cast this committed to the material. Perhaps when moving out of the “origin story” territory with the sequel (being filmed later this year), this series will become more than the sum of its influences.

Taylor is a Chicago-based writer and aspiring film historian. He is the editor here at TFP, and has contributed to a number of international publications such as Cinema Scandinavia, PopMatters, and Room 101 Magazine. He can also be found listening to podcasts, researching topics he has little use for, or running after a city bus.
You might also like
ChicagoJai CourtneyKate WinsletMiles Teller

END_OF_DOCUMENT_TOKEN_TO_BE_REPLACED
Taylor Sinople Picks: The 16 Best Films of 2016
Form and Function in Alex Ross Perry’s “Queen of Earth&...
Digging for Fire and Unexpected: Husband and Wife Process Parenthoo...
Every Thing Will Be Fine 3D Review