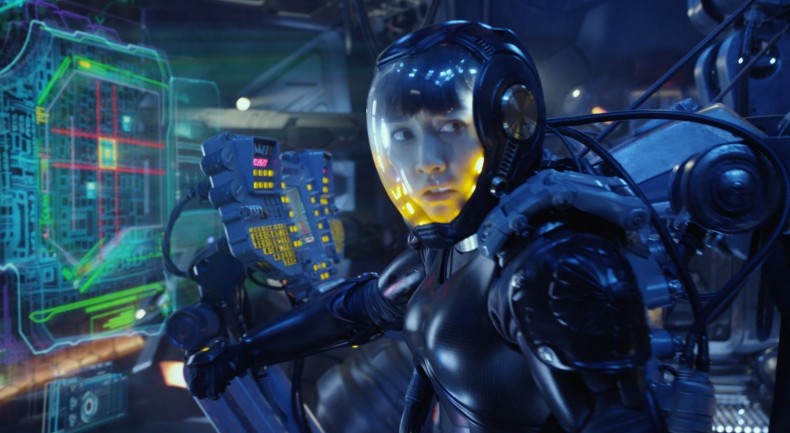 “Pacific Rim” is visually stunning, but a departure from the quality of director Guillermo del Toro’s previous work thanks to a host of disappointingly underdeveloped ideas.

Let’s start with a confession: I geeked out over all sorts of things growing up, but monsters and robots weren’t in the picture. For those that have fond memories of past (or current) obsessions with Japanese monster-attack horror, mech warriors, and the like, “Pacific Rim” is likely to be a towering ode to childhood nostalgia. For the rest of us, “Pacific Rim” is a very loud, very long trip into a well-constructed world filled with frustratingly undeveloped ideas.

In the surprisingly near future, 250-foot monsters (called Kaiju) have begun erupting out of the ocean and attacking major metropolitan areas. In response, global militaries have designed equally massive robotic weapon systems referred to as “Jaegers.” “To fight monsters we created monsters of our own,” the narration recalls in the short opening montage that succinctly brings the viewer into the history and world of the film.

Humans act as surrogates to the Jaegers by “Drifting” – technology that allows for a neural bridge from man to machine. The Jaegers are so powerful, however, that they require two humans to work together in cooperation – entering the Drift together. While Drifting, these two pilots are deeply connected, simultaneously experiencing the same memories and emotions as they each control part of the Jaegers’ combat movements.

One well-respected Jaeger pilot, Raleigh Becket (Charlie Hunnam), along with his brother, forge a strong and successful connection in the Drift as pilot partners until tragedy strikes during a fight. Five years later, Raleigh has retired and is working in construction when he gets a call from the commanding officer of the Jaeger division, Stacker Pentecost (Idris Elba). In light of the U.N. shutting down the Jaeger program in favor of building a protective wall to defend against the Kaiju, Stacker is desperate to use his four remaining Jaegers in a final attempt to destroy the cross-dimensional portal that connects the world of Kaijus to Earth.

Teaming up with an inexperienced female pilot (Rinko Kikuchi) in Hong Kong, Raleigh takes up the fight again in a half-dozen sequences of epic skyscrapers of monster and machine clashing. Meanwhile, polar opposite scientists (and sources of comic relief) Newt (Charlie Day) and Gottlieb (Burn Gorman) argue about the best way to destroy the Kaiju threat forever in a short, satisfying subplot that leads Newt to a black market Kaiju organ dealer – the exceptionally bizarre Hannibal Chau (Ron Perlman).

Mexican fantasy filmmaker Guillermo del Toro is perhaps best known for his adaption of “Hellboy” and his masterpiece – the 2006 dark fairytale “Pan’s Labyrinth.” Both of those films demonstrate an incredible understanding of world and character building in the fantasy genre, even amongst substantial budget restraints. Now, at last, given as close to free reign as the film industry can allow with a colossal $180,000,000 budget, del Toro somewhat betrays the roots of his previous successes. “Pacific Rim” is THE fantasy film many 10-year-olds dream about, but it is only vaguely reminiscent of the adult, artistic genius of his previous efforts – and the quality suffers for it. I can appreciate del Toro’s intent to re-visit such a straightforward and nostalgic genre, but that didn’t make the experience any less hollow.

It all has to do with your requirements for the movie. If you want to see epic, CGI-laden action sequences that rapid-cut to an A.D.D.-approved pace, you could do a lot worse than “Pacific Rim.” On the other hand, to someone who is interested in action sequences that are not only intense and technologically innovative but original and – dare I say – surprising, too, this is less impressive.

The scale is huge, bigger than ever, but del Toro cheats you out of ever actually seeing it. The action sequences take place almost entirely in the ocean at night, shot in unrevealing, irritating close-ups. Add in the seriously dense business of having to capture the war between monster and robot unfold AND the experiences of the pilots inside the Jaegers while being hit with the cacophonous soundtrack and close-ups of metal crunching and buttons being pressed and things beeping and clicking together, and you have one hell of an exhaustive film.

Outside of the exciting, albeit very predictable and conventional action spectacle that takes up over half of the screen time, the quiet moments are what really fall short. Leading man Charlie Hunnam in particular is rubber-stiff, bending slightly to whatever the scene calls for but never really inhibiting any fluidity thanks to the screenplay that renders the actual dialogue spoken largely pointless. There’s nothing worse than feeling like the characters are only talking because they have to fill some time in between action sequences. Whenever something important actually does come up, it’s hit over our heads two or three times too many, as if the filmmakers are knocking on the screen to make sure you’re picking out the important parts. Thankfully, there is no romantic subplot.

As to the value of 3D and IMAX – the film was post-converted to 3D, not natively produced in the format, but thanks to the extra care put in (40 weeks of conversion work), the final 3D print is pretty good. Cinematographer Guillermo Navarro and a highly experienced visual effects team work overtime to thrust particles of any kind in your face at every opportunity – dust, water, sparks, snow, stars – it all looks great in 3D. Similarly, the epic scale is clearly a match made in heaven for IMAX screens. Beyond technical achievement, though, there is an important lack of substance. The Kaijus are monstrous and deadly, but have no personality, no distinction from one another other than some minor differences in appearance. At a couple of points, the screenplay goes out of its way to suggest that the Kaijus all have one shared consciousness, yet this isn’t developed into the plot. As it is, they are only “the other” – the enemy, the punching bag, not characters.

“Pacific Rim” is an event movie – no doubt. Coming from a director as respected as del Toro, it ends up with a few right moves. It seems putting Ron Perlman in a del Toro movie in any capacity is one of these right moves – Perlman is captivating as a collector and dealer of monster organs. His costuming alone had me looking into “Hellboy 3.” I also really enjoyed the way the dual-pilot mechanic broke up the typical “singular hero” mentality of many superhero movies. The intense mental link between pilots during combat is a fine plot point that opened the door for a bit of backstory but wasn’t used to further drive the plot as it should have – the film’s third act pretty much forgets about this connection entirely.

In some circles, “Pacific Rim” is already being hailed as revolutionary – the “Star Wars” of a generation. I can’t even approach an understanding of this testament, but I can understand the simple entertainment value the film brings. “Pacific Rim” IS fun, but at the cost of most attributes that make a movie fulfilling beyond the lust to witness pieces of metal hitting other pieces of metal. It is a doomsday movie that doesn’t work to make you care about the human race. We never witness the danger that regular people are in, people we can connect with and care about.

I always talk about the “life” in films, that’s what seems to stick with me the most over time. When memories of a specific plot have faded, the life of a film stays with you. “Pacific Rim” walks a thin line, but ultimately loses hold of the originality of its premise by carrying out and ending the plot on notes that have been done over and over again. The tagline to the film is “Go big, or go extinct” – an accurate summation of Hollywood’s current relationship with the blockbuster. The life of “Pacific Rim” is not its own, but part of a slew of technically proficient action movies this summer season that are a little bit more worried about filling seats than imaginations.

Taylor is a Chicago-based writer and aspiring film historian. He is the editor here at TFP, and has contributed to a number of international publications such as Cinema Scandinavia, PopMatters, and Room 101 Magazine. He can also be found listening to podcasts, researching topics he has little use for, or running after a city bus.
You might also like
cgi

by Andy Taylor on November 16, 2013
10: JJ Abrams Let’s get this one out the way at the beginning. While countless people are moaning about how they’re sure Episode VII will just be one hour and a half long lens flare, it’s clear to me that these people are clearly morons. Let’s just examine what Abrams did with Star Trek: he […]
comments
Leave a reply
Add Comment Register

END_OF_DOCUMENT_TOKEN_TO_BE_REPLACED
Taylor Sinople Picks: The 16 Best Films of 2016
Form and Function in Alex Ross Perry’s “Queen of Earth&...
Digging for Fire and Unexpected: Husband and Wife Process Parenthoo...
Every Thing Will Be Fine 3D Review