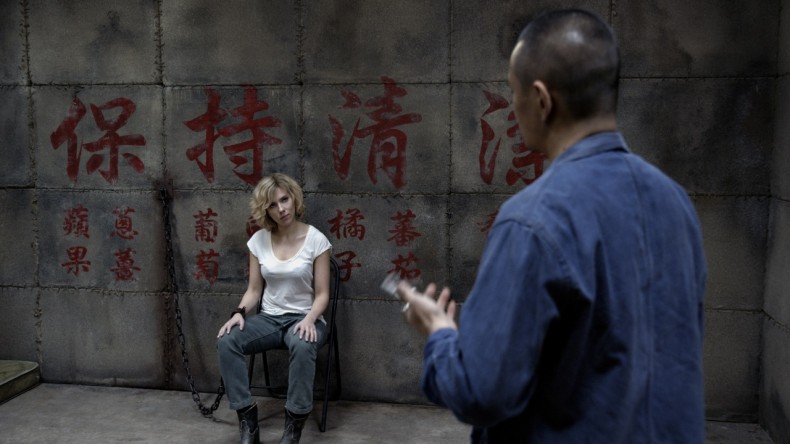 By not embracing the sheer insanity of the script, Besson has made a shallow, uninteresting slog even as Scarlett Johansson tries her best to save the film.

There are some years when actors seem to have everything fall in their favor. Matthew McConaughey solidified his escape from career-jail last year as a cocaine-fueled stock broker in “The Wolf of Wall Street,” a wildly idiosyncratic detective on HBO’s “True Detective,” and finished with a body-transforming performance that won him an Academy Award for “The Dallas Buyer’s Club.” This year, after receiving effusive praise in last year’s “Her,” Scarlett Johansson followed with her bravest and most compelling performance to date in Jonathan Glazer’s “Under the Skin.” Shortly after, she was seen in full-on superhero mode in the massively successful “Captain America: The Winter Soldier,” and then she slid into a tiny role in Jon Favreau’s critical darling, “Chef.” Johansson is certainly in the midst of the most important year of her professional career.

Now, she stars in “Lucy:” the new metaphysicalpseudo-scientific action-comedy directed by the sometimes-successful Luc Besson (“Leon: The Professional ,” “The Fifth Element”). Lucy (Johansson) is an American living in Taipei, whose backstory is never explored by Besson. With the intent of making her a drug mule, an international drug kingpin played by Min-Sik Choi (from Chan-wook Park’s 2003 cult favorite “Oldboy”) kidnaps Lucy and surgically implants a bag of CPH4 into her stomach. While in captivity, the bag mistakenly explodes and releases the drug, which is heralded by scientists as a chemical produced during pregnancy that can unlock untold cerebral capacity, into her bloodstream.

Once injected with the drug, Lucy’s brain quickly evolves and becomes capable of accessing its full capacity (rather than…10%). As she accesses more of her mental capacity, she is able to read minds and manipulate time, space, and matter.

Much of this is laid out in a very circuitous exposition dump in the first half hour of the film that cross-cuts between Lucy’s story and a neuroscience lecture led by a professor played by Morgan Freeman. Much of the early scenes, though completely devoid of realism, move at a breakneck pace. The film doesn’t stop to give even a cursory reason as to why Lucy is able render the powers she gains. Besson seems to be more interested in showing the elaborate set pieces than pulling them together with a cohesive story.

The film, which is quite well shot, is something of a science experiment on its own. Lucy’s journey is like a feverish acid dream fueled by vague, meaningful dorm room conversations about the nature of existence. But for all the film’s self-seriousness, it falls into the realm of an action-comedy, whether intended or not. Besson’s film, which has Freeman lecturing about procreation imposed over a series of apes, cheetahs, and frogs all having sex, is heavy on insane concepts, but never fully embraces the ludicrousness of the proceedings.

The film lacks true tension towards the end. As Lucy becomes more powerfulhe becomes nearly indestructible. During a fight sequence in a hall with five or six men, all she has to do is manipulate space and the men are rendered useless. The scene, which should be laden with tension, is a primary example of how the film ultimately isn’t working. Lucy is so powerful and indestructible that she becomes the deus ex machina of her own story. While this has played out successfully in many films before, the plot of “Lucy” falls short because her powers are never matched such as Neo’s foil in “The Matrix,” Agent Smith.

For as much intelligence as Lucy has, she still makes some incredibly, questionable decisions. Her decision to not kill a certain character when she has the chance makes little sense in the context of the story.
This isn’t to say, however, the film is without its delights. “Lucy” holds up during individual sequencesbecause of the gleeful presentation. Besson is certainly having some fun trying to find a reason for stringing these seemingly disconnected set pieces together into one moderately cohesive whole. Freeman, who is the proxy for the audience, gets to deliver some of the most nonsensical dialogue of his career while standing in a complete daze for much of the film.

Johansson is the main attraction here, though. The role isn’t built on physical action such as “The Avengers” franchise. She is much more silent, and is forced to convey everything with her eyes. The film’s best scene is one that is fixated, in an almost unbroken take, on her face as she makes a tearful phone call to her mother.
Unfortunately, there aren’t many moments that soulful, as Besson never brings enough visual flare to fully embrace the complete pandemonium of his script. For a film that makes a Kubrickian time-jump from the age of dinosaurs to the current day, Besson managed to make something much worse than a bad film. He made an uninteresting one. As bland as “Lucy” may be, Johansson brings enough magnetism to the screen, leaving no doubts that she will continue her streak of diverse and exciting performances. Thankfully the film is mercifully short, and thanks to Johansson’s dynamism, it will play well in a few years on a Sunday afternoon when there is nothing else to do.

by Zack Miller on August 17, 2014
Though entirely too kind to its characters to be a true disaster film, "Into The Storm" is a mostly entertaining ride with some impressive special effects.
comments
Leave a reply
Add Comment Register

END_OF_DOCUMENT_TOKEN_TO_BE_REPLACED
Taylor Sinople Picks: The 16 Best Films of 2016
Form and Function in Alex Ross Perry’s “Queen of Earth&...
Digging for Fire and Unexpected: Husband and Wife Process Parenthoo...
Every Thing Will Be Fine 3D Review