Reviews
3
1
previous article
A Fresh Look At: Slacker (1991)
next article
Review: As It Is in Heaven

Review: Dawn of the Planet of the Apes 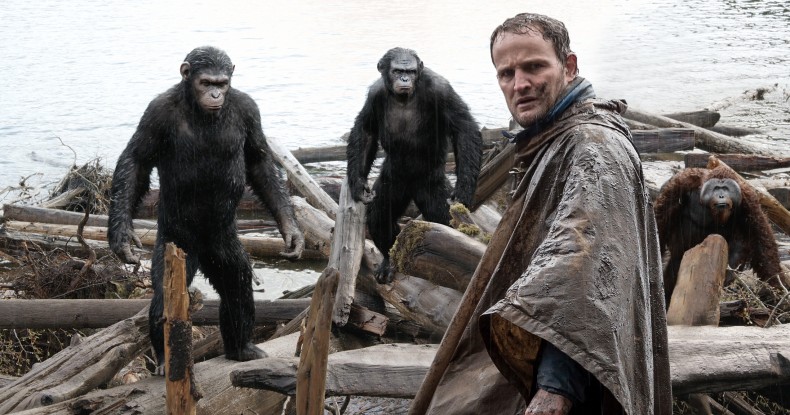 “Dawn of the Planet of the Apes” succeeds by aping its predecessors while enriching their ideas with new talent and fresh filmmaking. Pun fully intended.

Take a wholly inventive and allegorical premise and make a seminal science fiction film. Turn it into a franchise by churning out a series of middling sequels. Wait 30 years. Remake the original, to poor effect. Wait 10 years. Reboot the franchise, this time with a prequel. If you think that sounds like a recipe for success, you’re either crazy or a Hollywood executive… unless, of course, you’re talking about “Planet of the Apes”.

Upon its release three years ago, I didn’t believe that “Rise of the Planet of the Apes” had any business being made, let alone being a good film. Like everyone else, I was pleasantly surprised. When “Dawn of the Planet of the Apes” was announced, my excitement was tempered with trepidation, knowing how rare it is to find a sequel that can stack up to the original. Could lightning really strike twice? As it turns out, director Matt Reeves is related to Zeus: “Dawn” reprises the best aspects of “Rise” while also managing to surpass it on every level.

The similarities are immediately recognizable. Where “Rise” opens humans capturing the apes that set the whole story in motion, “Dawn” sets the same scene, this time with the apes doing some hunting of their own. The merits of this sequence are twofold: it strengthens the ties back to a cinematic world with which we are already familiar while showing us that the hunted are now adept hunters, quickly establishing the evolution that has taken place during the ten year interlude. This duality – building new ideas from a foundation of franchise miscellanea – permeates the film; even Michael Giacchino’s gorgeous score contains knowing nods to 1968 soundtrack from Jerry Goldsmith.

Another element that “Dawn” successfully recycles is the humanizing of the primates by grounding them, mid-film, in a common genre trope. The trial of Charlton Heston’s Colonel Taylor in the original takes cues from courtroom dramas and Caesar’s new-kid-on-the-block arrival at the primate shelter in “Rise” is prison movie 101. This time around, we get a battle scene that could have been ripped from a much furrier version of “Saving Private Ryan”, right down to the shot of a gorilla trying to drag his wounded friends safely out of the line of fire. The amount of compassion that such a visual can inspire is as much a testament to Reeves’ filmmaking as it is to the performances, and both are in top form.

The climactic clash with the humans delivers the most bravura shot – from a stationary camera mounted on the turret of a tank – but the entirety of the film is strikingly photographed and composed. As Caesar, Andy Serkis turns in what is sure to be another in a long line of performances that scream for motion capture inclusion in Academy Award consideration. The rest of the apes refuse to let this become a one-man show, though; Tony Kebbell (Koba), Nick Thurston (Blue Eyes), and the rest of the simian stand-ins are outstanding in their roles. The animators are the missing link, so to speak – the unsung heroes of the film that connect the actors’ gestures and expressions to what we see onscreen with astounding results. It’s no insult to say that Jason Clarke and Gary Oldman, who are as dependably great as ever, seem merely competent by comparison.

Besides the technical achievement, “Dawn” succeeds on a thematic level. Given the hot-button state of gun control, the introduction of firearms as a driving source of conflict makes the story incisively timely and relevant. Without this update, the film could have ended up simply rehashing the concepts of man’s animalistic nature and the narrowing divide between human and ape, already well covered by the series. As it stands, this is the paragon of franchise filmmaking: an engrossing summer blockbuster with relatable intellect and a tangible connection to where it came from, and just a hint of where it could go.

Zack is a software developer from Halifax, Nova Scotia moonlighting as a cinephile - until the weekend, when those roles reverse. He can often be found thoughtfully stroking his beard or thoughtfully stroking his cat. Despite remaining in the sitting position almost exclusively, he occasionally makes time to be bent into other shapes during jiu jitsu practice. You can aggresively shout your opinions and objections at him via Twitter or in person (anywhere beer is served).
You might also like
jason clarke

by Taylor Sinople on June 24, 2013
Three-tour Afghanistan veteran John Cale’s (Channing Tatum) career has taken a turn for the mundane when we meet him working as security detail for the United States Speaker of the House. A U.S. Capitol Police officer, Secret Service reject, and divorced father to the young, politics-obsessed Emily (Joey King), Cale takes his daughter to visit […]
comments
Leave a reply
Add Comment Register

END_OF_DOCUMENT_TOKEN_TO_BE_REPLACED
Taylor Sinople Picks: The 16 Best Films of 2016
Form and Function in Alex Ross Perry’s “Queen of Earth&...
Digging for Fire and Unexpected: Husband and Wife Process Parenthoo...
Every Thing Will Be Fine 3D Review