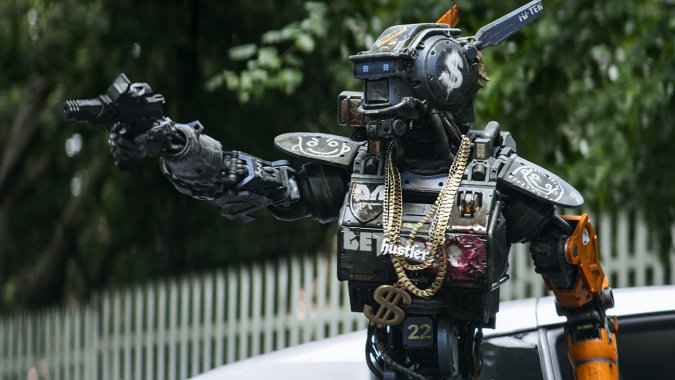 Chappie is one hell of a convoluted little movie, with confused thematic and narrative directions that function only as a massive disservice to its endlessly charming titular character.

Neill Blomkamp’s District 9 was one of 2009’s biggest surprises, making it all the way to the Oscars, where it was nominated four times. Now, with one disappointing film – Elysium – and a bafflingly awful one – his most recent, Chappie – under his belt, many fans of the Alien franchise may begin second-guessing their enthusiasm regarding some recent news of Blomkamp’s attachment to the series’ latest installment.

Starring frequent Blomkamp collaborator Sharlto Copley as the titular robot character, Chappie follows an enthusiastic young engineer, Deon Wilson (Dev Patel), as he works to develop a robotics software that will give any AI the ability to think and feel independently of its creator, much like a human. His direct competitor, a gun-wielding military man named Vincent Moore (Hugh Jackman), does his best to uncover some dirt on Deon whenever possible, due mostly to the fact that Deon’s slick and slender police robots were commissioned for the South African police force over Vincent’s bulky, intimidating war machines.

When Deon thinks he has a code that works, he installs it into one of the decommissioned police robots that was destroyed in the line of duty, having been forced to rebuild it quickly when a group of thugs (Ninja and Yo-Landi Visser, of Die Antwoord) kidnap Deon in the hopes of using his robot as their own, indestructible gangster henchman. Miraculously, the being comes to life and is quickly dubbed Chappie, a “robot gangsta #1” who is destined to assist Ninja, Yolandi, and their roommate Amerika (Jose Pablo Cantillo) on a heist that will absolve them of their debts to a local crime lord and get them the hell out of Joburg.

At 120 minutes, Chappie is writer-director Neill Blomkamp’s longest – and, appropriately enough, most bloated – film to date. Packed to the brim with subplots, characters, primary and secondary villains, and an abundance of protagonists with conflicting thematic development, Chappie is just a complete and utter disaster. Aside from the charming voice performance from Sharlto Copley, who is far and away the best trick Blomkamp has up his sleeve, Chappie is a film that just does not work on any of its many levels.

At first, it’s a story about crime prevention, then it becomes a story about divorce, while finally settling into themes of consciousness, humanity, and immortality. I remember thinking multiple times how great of a film Chappie could have been if it decided to be one of the six or seven movies that it already is. Tonally, there’s absolutely no barometer that could gauge a movie like this, and Blomkamp is just not a good enough writer to make all, let alone any, of it work.

Like Chappie himself, the film is just too unfocused and childlike to make any kind of significant impact on its viewing audience. It sets up a lot of interesting trajectories for both its characters and its themes, but the bloated runtime and the lame (emphasis on lame) writing sends it flying right off the rails with no concern for pacing, tone, or mood. It’s beginning to seem like District 9 was an accidentally great movie, one that will always loom over the projects Blomkamp associates himself with in the future.

It’s fun to watch gritty, r-rated sci-fi that isn’t afraid to tackle a number of controversial subjects that exist within the cultural conversation that’s taking place today, but Chappie, even more than Elysium, talks down to its audience in a way that’s less offensive and more, I don’t know, unbearably agitating. Whether it’s Blomkamp himself or his own faith in the general viewing audience, nothing about the man’s films are subtle in the slightest, with Chappie reaching new plateaus of “look at the themes I am so graciously presenting for you!”

It’s becoming a little pathetic, and Blomkamp might need to consider handing off his story ideas to other, more capable writers, especially because he’s such a talent behind the camera. As it stands, Chappie is a massive disappointment from a filmmaker who was once revered as a game-changer in the genre. And while Chappie may have moments of inspired lunacy, it really is just more of the same.

Josef Rodriguez is a writer, filmmaker, and musician living in New York City. He is often labeled as "that guy who didn't love Boyhood" and he finds himself liking Harmony Korine films more than he likes his own friends. When he's not stressing over turning in reviews on time, Josef can be seen playing guitar, watching "Spring Breakers," or trying to write the next great American movie.
You might also like
Hugh JackmanNeill BlomkampSharlto CopleySigourney Weaver

by Williamson Balliet on May 25, 2014
In this Double Exposure review, two critics face off in a discussion on "X-Men: Days of Future Past."
Comments
Leave a reply
Add Comment Register

END_OF_DOCUMENT_TOKEN_TO_BE_REPLACED
Taylor Sinople Picks: The 16 Best Films of 2016
Form and Function in Alex Ross Perry’s “Queen of Earth&...
Digging for Fire and Unexpected: Husband and Wife Process Parenthoo...
Every Thing Will Be Fine 3D Review