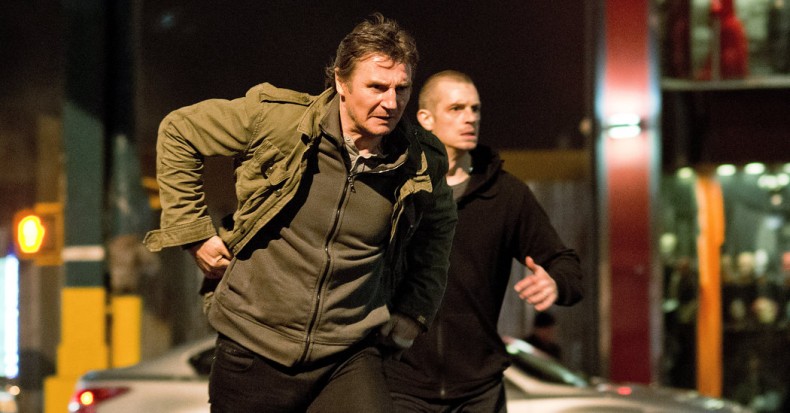 "Run All Night" is a somewhat disappointing collaboration between Liam Neeson and Jaume Collet-Serra, who fail to recreate the compelling thrillers of their previous effort, "Non-Stop."

The recent action renaissance of Liam Neeson has just about run its course, and some recent news that he plans to quit making action movies in two years means that he knows it, too. But there have been some diamonds in the rough, including Joe Carnahan’s poetic and beautiful The Grey, Scott Frank’s bleakly violent A Walk Among the Tombstones, and Jaume Collet-Serra’s economic and thrilling Non-Stop, a film about a hard-drinking Air Marshal looking for a terrorist aboard a consumer aircraft.

Collet-Serra and Neeson had collaborated before on 2011’s Unknown, but the final product was much less polished and effective. Non-Stop had an immediacy to it – as well as a decent bout of social commentary – that made it more worthwhile as a vehicle for Neeson’s talent. Run All Night, their third collaboration (and the first with an R-rating), was gearing itself up to be the best yet. Here, Neeson dives into some familiar territory – an ex-con, a former alcoholic, an absentee father, and a bona fide badass – but his character, Jimmy Conlon, benefits from an unexpected kernel of character development that has him playing the no-name henchman of the city’s most feared member of the organized crime syndicate, Shawn Maguire (Ed Harris).

This puts both the actor and the character in a position where he’s no longer in control of the situation. He’s not an Air Marshal, he’s not a respected former CIA agent, and he’s not a private investigator who is consistently smarter and faster than everybody in the room. He’s a washed up hitman with years of regret and gallons of booze rotting his insides, begging his boss’ POS son Danny (Boyd Holbrook) for $800 bucks to fix his heater. It’s jarring to see Neeson play a character with a timidity that we haven’t seen from him since Love Actually, but it makes his man-with-the-plan transition all the more gratifying.

Said transition is forced upon him when a convoluted series of events leaves his only son, Mike (Joel Kinnaman), in quite a sticky situation. Long story short, Jimmy is forced to kill Danny in a moment of desperation, leaving Mike with the dead offspring of the most powerful man in New York lying in his kitchen. Knowing that Shawn has the entire NYPD on the payroll, Jimmy spends the entire night doing everything in his power to get Mike off the hook in return for his own life. Let the badassery begin.

Or so it seems. While Run All Night is undoubtedly the no-holds-barred thrill ride that fans have been promised, it’s a noticeably lesser film than Neeson’s previous action-centric work, especially some of his most recent films, which have tipped the scale into more dangerous and impactful works. It’s probably the closest thing we’re ever going to get to a Grand Theft Auto movie – hell, some of the family dynamics at play here are downright Shakespearean – and this endorsement should be a cry for joy. But it isn’t, and that’s only because, unlike Grand Theft Auto and many of the other, better crime movies that this film so badly wants to be, Run All Night can’t seem to find a tonal balance to carry it through to the finish line.

On the one hand, there’s a certain sleekness to the proceedings that is appealing, but it aims to tell a gritty tale of hardened criminals and old friends doing what they must to survive. But then, it bombards its audience with completely bonkers action sequences that look like they could have been stripped from an early 90s Schwarzenegger flick. However, despite this, the film tends to take itself way too seriously, with an otherwise humorless approach that insists on dignifying its characters instead of just having fun with them.

And by trying to be, or not be, all of these things at once, Run All Night ends up feeling a little amorphous by the end of its first act. It doesn’t have the unapologetic grimness of A Walk Among the Tombstones, the introspectiveness of The Grey, the economy of the original Taken, or the unabashed but strangely dignified lunacy of Non-Stop. It instead takes elements from all of these films and, unsuccessfully, tries to take the best aspects of each in the hopes of creating an even more fulfilling experience than any of those other films were able to offer.

Spoiler alert, it can’t. It comes close more times than not, but it just can’t lock in a rhythm to coast on, leaving its audience unfulfilled without any justifiable explanation as to why, which is actually pretty clever in its own right. If asked why I, specifically, was unsatisfied with Run All Night, I don’t think I could pinpoint one aspect of the actual filmmaking that bothered me. From scene-to-scene, there’s no doubt that the film is expertly made, with wonderfully choreographed fight scenes, pristine New York cinematography, and a pair of above average performances from Liam Neeson and Ed Harris. Sure, it doesn’t always cohere in the way it should, but nothing in the movie itself is really all that bad.

However, it’s a film that makes sure to include every element of what a good action movie should be, and it mostly delivers on those requirements, but only on a superficial level. The nuts-and-bolts of why the film doesn’t work are a little more vague – or specific, depending on how you look at it – than that, and if asked what exactly makes Run All Night an unfulfilling experience, the answer would have to be that Collet-Serra’s film knows what it wants to be, and it knows how to be what it wants to be, but it doesn’t exactly know why it wants to be that.

In other words, it recognizes the well-worn elements of a good action film and tends to employ those elements with the intention of creating a cinematic moment, but the follow through on the execution itself is subpar because these moments feel like requisites for what this type of film should be, not a creative decision on the part of the filmmakers. Besides the obvious “not enough Boyd Holbrook” complaint that is applicable to every film (even ones that don’t feature Boyd Holbrook), Run All Night suffers from a mess of jumbled ideas, tonal inconsistency, and a certain unpolished quality that doesn’t do it any favors. It’s the cinematic equivalent of deciding that, because oysters and chocolate cake are your two favorite foods, the only logical progression is to make a chocolate oyster cake.

Josef Rodriguez is a writer, filmmaker, and musician living in New York City. He is often labeled as "that guy who didn't love Boyhood" and he finds himself liking Harmony Korine films more than he likes his own friends. When he's not stressing over turning in reviews on time, Josef can be seen playing guitar, watching "Spring Breakers," or trying to write the next great American movie.
You might also like
Boyd HolbrookCommonEd HarrisGenesis Rodriguez

END_OF_DOCUMENT_TOKEN_TO_BE_REPLACED
Taylor Sinople Picks: The 16 Best Films of 2016
Form and Function in Alex Ross Perry’s “Queen of Earth&...
Digging for Fire and Unexpected: Husband and Wife Process Parenthoo...
Every Thing Will Be Fine 3D Review