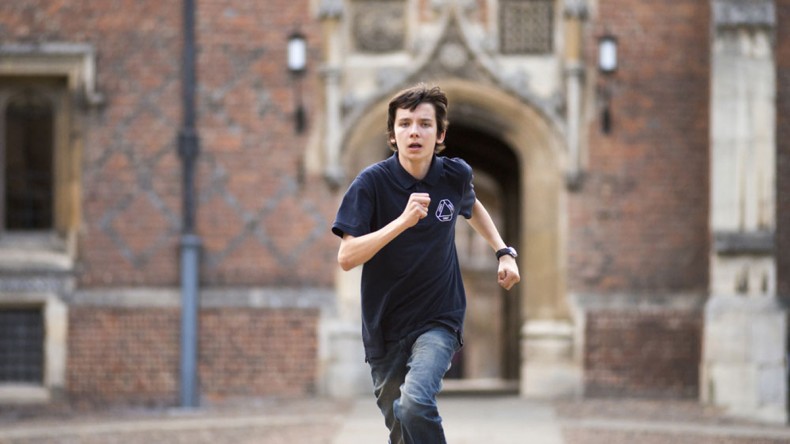 Ryan Piers Williams’ "X/Y" has the seedlings of a good film, but they never sprout into anything more than forced dialogue, bad performances, and a lack of thematic clarity.

Ryan Piers William’s X/Y – titled as such because it depicts the generation that is neither X nor Y – is the reason why twentysomething New York indies get such a bad name. It’s exactly the kind of needlessly stylish, poorly performed, and confusingly written mess that undermines the good, truthful work that’s being done about New York by filmmakers who are actually from New York. As it stands, X/Y is LA’s version of New York, written, directed by, and starring a filmmaker from the west coast, a fact that becomes plainly obvious even in the film’s opening moments.

On the brink of separation, Sylvia (America Ferrera) and Mark (Ryan Piers Williams) decide to go their separate ways when he reveals that he’s unhappy, while she confesses to sleeping with Jason (Common), a co-worker. Staying at his buddy Jake’s (Jon Paul Phillips) house – a handsome, British model who’s encountering some emotional issues of his own – Mark opens up about his own insecurities regarding his relationship, while Sylvia confides in her closest friend, Jen (Melonie Diaz), a beautiful but jobless woman who has just come from a one-night stand, but not before giving her number to a local barista (Danny Deferrari).

Throughout the film, Williams takes some time to focus on each character individually, allowing certain storylines to overlap from time to time. Mark is a struggling screenwriter who needs to find the right producer for his latest script. Sylvia is wrestling with her reputation at work, as well as her own feelings for Jason, who seems to be content with simply having sex in a bathroom during their lunch break. Meanwhile, Jen wrestles with the consequences of accidentally sleeping with a married man, while Jake takes out his own frustrations on women he meets at clubs while DJ’ing.

At 77 minutes without credits, X/Y plays out like an extended episode of your favorite, scripted reality series – maybe with a little more artistic flair. The characters talk and act like mopey high school kids who have seen one too many Godard films, while the performances themselves are riddled with a near total lack of intention. From line readings to body language, it seems that nobody in this film actually knows what he or she is supposed to be doing, including the director himself, who casts himself in a major role but is seemingly unaware of how to play it.

There’s really only one scene in this film that works, and it’s a brief dialogue between Mark and his agent, played brilliantly by David Harbour in a role that had to have been some kind of returned favor. The dialogue is economical, the performances work, and everything goes according to plan. This can be said with confidence as no other scene in the film, whether visually or audibly, seems to go right. Lines are recited clunkily – including a delivery by barista man Danny Deferrari that (I think) is supposed to be charming, but ends up sounding like something you’d hear in a semi-decent porn movie – and the film uses a lot of unnecessary visual tricks and musical cues to the point where there is some obvious padding going on to compensate for the relatively slim runtime.

Yet, these glaring, deal-breaking flaws pale in comparison to the fact that X/Y fundamentally misunderstands the dynamics of young New Yorkers. The speech patterns, topics of discussion, and character behavior are all characteristic of an LA film, to the point where Williams films certain scenes as if he were trying to recreate an urban California landscape. It’s understandable that hobbies on the east and west coast aren’t dissimilar, but when you have characters surfing, talking incessantly about a variety of past and present lovers, and getting high while engaging in some pretty intense mural painting, you might as well set your film in LA because the tone is so obviously that of a group of young Californians, not young New Yorkers.

There are kernels of hope sprinkled throughout – and, at barely 80 minutes, the film doesn’t have time to be boring with its barrage of unresolved, lazily plotted storylines – and the central idea of making a low-key drama about two characters suffering the first 48 hours of a breakup is absolutely a fine idea for an indie romance. But Williams doesn’t know what to do with it, and every one of his film’s redeeming qualities seems to have been achieved accidentally. Even in its last moments, when the film appears to be going for some kind of emotional ambiguity, Williams insists on giving explicit closure for no apparent reason at all, and it’s the most frustrating thing to watch. The only thing worse than this film is how good it could have been.

Josef Rodriguez is a writer, filmmaker, and musician living in New York City. He is often labeled as "that guy who didn't love Boyhood" and he finds himself liking Harmony Korine films more than he likes his own friends. When he's not stressing over turning in reviews on time, Josef can be seen playing guitar, watching "Spring Breakers," or trying to write the next great American movie.
You might also like
CommonDavid HarbourMelonie Diaz

by Josef Rodriguez on December 8, 2014
Though it falls into many tropes of the historical drama, “Selma” ends on a high note, depicting the struggle of Martin Luther King Jr. and his group of followers with honesty, humor, and skill.
Comments
Leave a reply
Add Comment Register

END_OF_DOCUMENT_TOKEN_TO_BE_REPLACED
Taylor Sinople Picks: The 16 Best Films of 2016
Form and Function in Alex Ross Perry’s “Queen of Earth&...
Digging for Fire and Unexpected: Husband and Wife Process Parenthoo...
Every Thing Will Be Fine 3D Review