Reviews
0
previous article
SNL40: A Look Back at 40 Years of SNL in Film
next article
Review: Focus 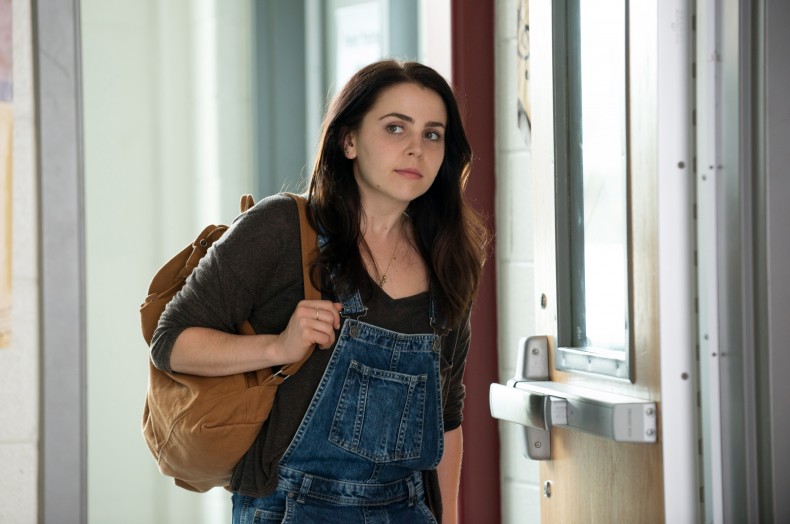 It may not diverge from the teen comedy formula at any moment, but The DUFF is hilarious and charming in all the right places, featuring two endlessly winning performances from Mae Whitman and Robbie Amell.

Every year, high school comedies become harder and harder to make for the simple reason that technology has drastically changed the dynamic of how teenagers interact. Some have tried, and failed, to incorporate this paradigm shift into their films, while others (specifically Easy A) have thrived in spite of it, approaching the material with a classic, John Hughes sensibility.

Ari Sandel’s The DUFF, may be the first high school comedy to, in this case, have its cake and eat it, too. The film follows a typically quirky type named Bianca (Mae Whitman), a lover of horror movies, writing, and offbeat music. Of course, her two best friends – Casey (Bianca Santos) and Jess (Skyler Samuels) – are two of the hottest human beings to ever walk the planet, which only highlights Bianca’s physical attractiveness, or supposed lack thereof. At a party, Wesley Rush (Robbie Amell), the most popular jock in school and boy toy to Queen rhymes-with-witch Madison (Bella Thorne), tells Bianca that she’s the DUFF: the Designated, Ugly, Fat Friend.

Outraged, Bianca soon realizes that every social group has a DUFF of its own, and the only way to “un-DUFF” herself is by dropping her friends and, in exchange for Chemistry tutoring, get advice from Wesley about how to dress, talk, and act. Obviously, this radical approach blows up in Bianca’s face, and before she can rid of her DUFF-ery, she must learn the hard way that the most important thing in life isn’t to be loved, but to love yourself.

As trite as it may sound, and ultimately is, The DUFF still emerges as one of the best teen comedies in ages, one that knows exactly what teens find funny. More importantly, though, it understands why. One early scene where Bianca and her friends stand in a circle, angrily deleting each other from various social media assured me that I was in the hands of a director who knew what he was doing and knew exactly how to get there, which stayed mostly true throughout the duration of the film.

As an adaptation, The DUFF is a massive improvement over its literary source material in a lot of ways, and there’s a definite give and take, especially in terms of how the film was adapted. The movie is faster, funnier, and more relevant than the novel ever was, even if it is more scattershot and maybe less complete. The creation of Bella Thorne’s Madison was a rather pointless inclusion that ultimately hurt the film, and many of the supporting characters feel one-dimensional, but there are so many laughs to be had in Bianca’s interactions with the people in her life that it almost doesn’t matter.

That said, there are definite and legitimate criticisms to be had about The DUFF, but a lot can be forgiven when watching Mae Whitman and Robbie Amell charmingly duke it out on-screen in a series of verbal sparring matches that rival some of the best work John Hughes ever did. Not only do these two improve the movie, they are the movie, and without them The DUFF would have fallen, without hope, into the forgotten Netflix Queue’s of teenagers across America, only to be watched once or twice while getting stoned with their friends during the summer. Instead, The DUFF has a chance at become a recognized classic in the genre, entirely as a result of these two performances.

The chemistry is undeniable, the timing is sharp, and both stars prove that they can be trusted with successfully headlining the biggest, most expensive thing brewing in Hollywood right now. Whitman, in particular, has been an unsung hero of off-kilter comedy since her days on Arrested Development, and her first role as leading lady only proves that she has been totally shafted by what ever system determines who and who is not fit to be a movie star. I pray that, if The DUFF does one thing, it catapults Whitman and Amell into the A-list stratosphere they deserve to be a part of.

Regarding the film’s ending, which has garnered some controversy as being hypocritical in going against the entire message of the movie, I’d just briefly like to touch upon this seemingly sudden shift in expectation, whereby, because a high school comedy is subversive and witty, getting the girl or getting the guy is now somehow off-limits. The DUFF operates within a very reasonable set of guidelines that allows the character of Bianca to realize her true self-worth, but to also improve herself as a person in a way that she’s comfortable with.

When all is said and done, there is rarely a moment in the movie where Bianca isn’t who she really is, and there’s nothing wrong with presenting a character who has a wealth of normal teenage aspirations: having a boyfriend, being liked, and at the very least not being tormented by her peers all day. The difference between this film and many others of its ilk is that the character always stays intact, regardless of the adversity or change she faces, and the message the film sends is ultimately an honest and touching one about the importance of self-worth in a culture that’s constantly rubbing its youth in the other direction. Mean Girls this is not, but The DUFF will surely be a favorite at house parties and slumber parties for years to come.

Josef Rodriguez is a writer, filmmaker, and musician living in New York City. He is often labeled as "that guy who didn't love Boyhood" and he finds himself liking Harmony Korine films more than he likes his own friends. When he's not stressing over turning in reviews on time, Josef can be seen playing guitar, watching "Spring Breakers," or trying to write the next great American movie.
You might also like
allison janneyBella Thorne

by Taylor Sinople on April 22, 2013
On a scale of 1 to 10, how would you rate yourself? Really? I’d say you’re more of a 3. How about that for road trip discussion with your mom’s new boyfriend? So it is for fourteen-year-old Duncan in Nat Faxon and Jim Rash’s The Way, Way Back – a competent, if not somewhat thin […]
Comments
Leave a reply
Add Comment Register

END_OF_DOCUMENT_TOKEN_TO_BE_REPLACED
Taylor Sinople Picks: The 16 Best Films of 2016
Form and Function in Alex Ross Perry’s “Queen of Earth&...
Digging for Fire and Unexpected: Husband and Wife Process Parenthoo...
Every Thing Will Be Fine 3D Review