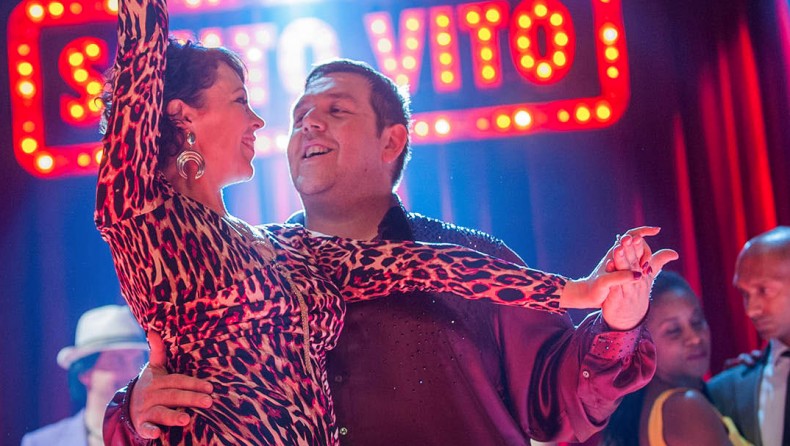 As a 13-year-old salsa-dancing prodigy, Bruce Garrett discovered the secret ingredient to Cuban fury: heart. Then he gets his face smashed into a puddle by a gang of bullies one too many times and decides to leave it all behind: the rhinestone-crested silk shirts, the rubber-soled, inch-and-a-half heels, everything.

25 years later, the only fury Bruce (Nick Frost) could be said to possess is for lathe technology and distribution. Out of shape, hopelessly single, and content to kick around the week’s romantic failures with a few misfit friends forever, Bruce is startled to find himself hitting it off with his new, beautiful boss from America (Rashida Jones). Bruce assumes she’s out of his league until he stumbles upon her walking into a dance studio to practice – what else? – salsa.

The opening sequence of “Cuban Fury” recalls a bit of the utterly cool, snap editing style of the Cornetto trilogy – the collection of comedy films from which lead actor Nick Frost is almost exclusively known to international audiences. But the rest of this dance-infused rom-com is a long shot from those wildly successful cult hits that revel in sly humor and capricious plot turns. On the contrary, “Cuban Fury” is loud, frequently obnoxious, and unforgivably predictable. If it weren’t for Frost, there wouldn’t be anything left to recommend. But Frost is a huge win for the film. After all, without him, it wouldn’t exist.

The script, while officially penned by Jon Brown, began with an original story by Frost based on his own experiences with insecurity while stressing over dancing in front of his friends and family at his wedding. Watching Frost overcome those self-conscious fears as an overweight born-again salsa dancer works on a few levels, all of which are completely genuine. The honesty he exudes in his quest to connect with his boss through dance nearly excuses all of the formulaic baloney that guides the film down a path traceable by the audience prior to actually viewing the thing.

The romance part of the equation works, but the comedy is caught in rougher waters. Frost anchors the hell out of the film, and first-time director James Griffith matches him up with a slew of English comedy greats, but the comedy too frequently digresses to fat jokes and crude asides from Bruce’s entirely obnoxious coworker (Chris O’Dowd). O’Dowd – whose overly confident douchebag character takes a liking to the hot new boss as quickly as Bruce – is toxic to the film’s otherwise lighthearted, trotting pace and only once or twice (out of many, many attempts) manages to turn shock-based toilet humor into actual laughs. More successfully, Ian McShane shows up as a mysterious, Latin Mr. Miyagi that teaches Bruce the ways of the salsa dance all over again. McShane and Olivia Colman (who plays Bruce’s sister), along with an unexpected appearance by Rory Kinnear, all deserve more scenes than they get, but do end up elevating the acting power of “Cuban Fury” above the typical fare.

As you might expect, there’s lots of great salsa music and dancing in “Cuban Fury,” from the easily anticipated final-act professional competition, to a ludicrous lunch break dance-off in the parking lot. Dance in the film is neither made a mockery of nor taken too seriously, a sweet spot found in part by the inclusion of outstanding real-life dancers like Yanet Fuentes. Even Frost went through over half a year of professional training to pull off all of the dance sequences himself.

Bruce remarks that, “sometimes salsa throws you through a spin.” “Cuban Fury” all but dooms itself on the page through by-the-book plot development, but with the life of the actors becomes something tolerable and at many times quite funny. Bruce convincingly comes out of his shell through salsa dancing, and Frost follows suit as a viable and charismatic lead actor. It turns out, the secret weapon to making a likable romantic comedy isn’t at all different to salsa dancing – you just have to have heart.

Note: For more on “Cuban Fury,” check out some exclusive audio from a post-screening Q&A with lead actor Nick Frost!

Taylor is a Chicago-based writer and aspiring film historian. He is the editor here at TFP, and has contributed to a number of international publications such as Cinema Scandinavia, PopMatters, and Room 101 Magazine. He can also be found listening to podcasts, researching topics he has little use for, or running after a city bus.
You might also like
Chris O’DowdIan McShaneNick FrostRory Kinnear

by Josef Rodriguez on October 12, 2014
Bill Murray may be able to do pretty much whatever he wants, but he shouldn’t be making bad movies. And St. Vincent is a bad movie.

END_OF_DOCUMENT_TOKEN_TO_BE_REPLACED
Taylor Sinople Picks: The 16 Best Films of 2016
Form and Function in Alex Ross Perry’s “Queen of Earth&...
Digging for Fire and Unexpected: Husband and Wife Process Parenthoo...
Every Thing Will Be Fine 3D Review