Reviews
1
0
previous article
Review: Ida
next article
10 Films from Cannes 2014 That You Won't Want to Miss 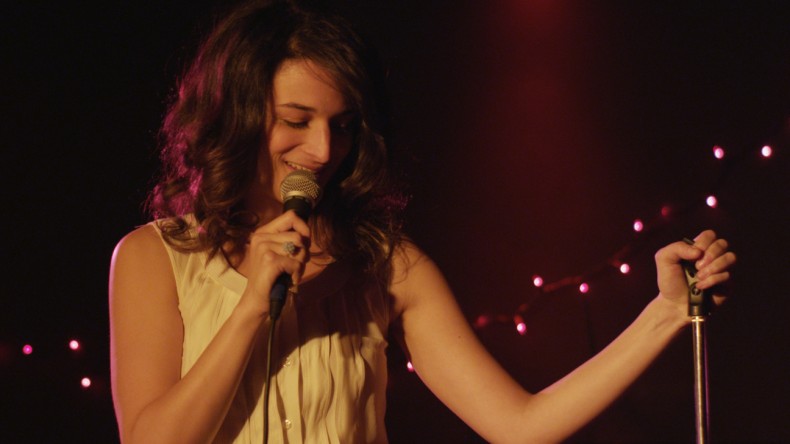 The funny and bold "Obvious Child" is a successful launching board for star Jenny Slate, but feels posed better as a TV show than a film.

Stand-up comics (the ones that are past most of the public speaking anxiety, at least) often refer to their stage time as therapy – a space where they can work out their lives through the ha-ha pretense that anything they say about themselves is part of the “bit.” So when Brooklyn comedian Donna (Jenny Slate) loses her job at a failing bookstore and finds out her boyfriend has been having an affair and is moving in with the other woman, she naturally takes it all onto the stage with her for a drunken set in her local back-bar comedy room (the only place she ever performs).

“I was recently…dumped up with,” is her opener for the worst set of all time. But it’s not all bad; she recovers with her best friend and roommate Nellie (Gaby Hoffmann) and by the end of the night has bumped into Max (Jake Lacy) – a genuinely kind and sort of dorky guy that she hits it off with. But Donna is not having a lucky year, and after an awkward, all-elbows one-night-stand with Max she finds out she’s pregnant. So she schedules an abortion and spends the next week anxiously waiting for the appointment and thinking over her life and failed connection with Max.

Writer-director Gillian Robespierre doesn’t make the abortion at the center of “Obvious Child” about what’s right (politically or morally), just what’s right for her character, Donna. Pro-life advocates are going to have a problem with the film’s casual treatment of the hot button issue, but Robespierre boldly pushes past the now-typical unexpected-pregnancy-conundrum mastered in “Juno” and focuses instead on a story about hitting rock bottom.

This is a clear launching vehicle for Jenny Slate, who is the only annoying part of NBC’s “Parks and Recreation” as Mona-Lisa, but here is much funnier and even dramatically successful. Her clumsy delivery of the film’s many abrupt one-liners is paramount to even the actual writing. You get a sense that some of the jokes had to come from rattling off a bunch of absurd phrases until one of them, hilariously, stuck.

Slate starts with her life in shambles and then gets pregnant; she’s a knocked up “Frances Ha.” “Obvious Child,” with its second-rate romance and endearingly crude humor, was never going to be as dramatically satisfying as that Noah Baumbach picture, but it goes beyond being a better comedy than a drama – it would actually make a better TV show than a movie. With the achievements tilting towards character and performance over story or production, “Obvious Child” screams “TV hit.” It’s a great cross-section between the authentic twentysomething experience of “Girls” and the irreverence and stand-up segments of “Louie.” By the end, I’d had enough of this particular story, but I still wanted more of these awkward, inappropriate characters.

Taylor is a Chicago-based writer and aspiring film historian. He is the editor here at TFP, and has contributed to a number of international publications such as Cinema Scandinavia, PopMatters, and Room 101 Magazine. He can also be found listening to podcasts, researching topics he has little use for, or running after a city bus.
You might also like
gaby hoffmannGillian RobespierreJenny Slate

by Josef Rodriguez on December 8, 2014
“Wild” features some of Jean-Marc Vallee’s most accomplished work behind the camera, and in the editing room, but it never manages to maintain the constant energy it needs to have the brisk pace that it wants, especially at an overlong 115 minutes.

by Taylor Sinople on July 18, 2013
The word “bizarre” must have been at least partially created to help define Chilean filmmaker Sebastián Silva’s hallucinogenic, rough-edged comedy “Crystal Fairy”. Setting out into the remote desert vistas of Chile with a 12-page outline and no tripod is a real-life right of passage as legendary as the quest that the characters of “Crystal Fairy” […]
Comments
Leave a reply
Add Comment Register

END_OF_DOCUMENT_TOKEN_TO_BE_REPLACED
Taylor Sinople Picks: The 16 Best Films of 2016
Form and Function in Alex Ross Perry’s “Queen of Earth&...
Digging for Fire and Unexpected: Husband and Wife Process Parenthoo...
Every Thing Will Be Fine 3D Review