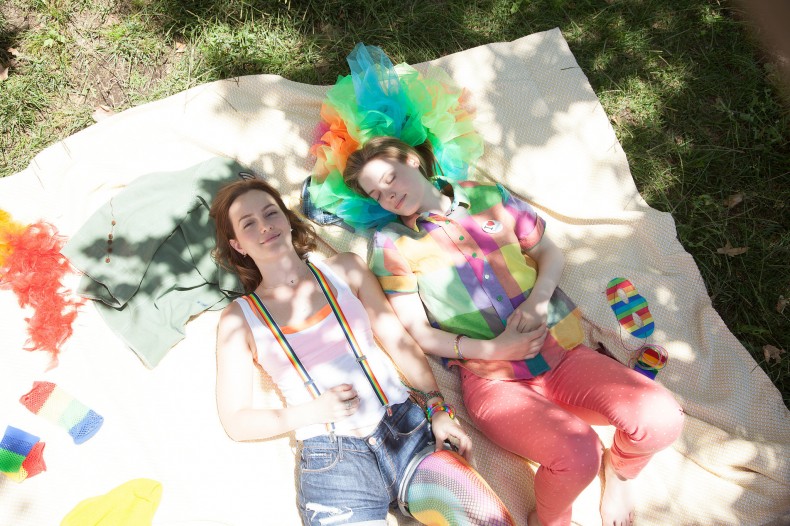 Growing pains and a friendship under stress don’t provide enough substance for “Life Partners,” a buddy comedy that gets tied up in too much meandering and subplotting.

We hit an inflection point in the personal-growth-strains-friendship comedy subgenre with Noah Baumbach’s 2012 feature “Frances Ha.” The film was intelligent, crisply shot, and inhabited with authentic characters, setting the bar high for independent filmmakers seeking to tackle the struggles of idle early adulthood. Susanna Fogel’s “Life Partners,” developed from her play of the same name, makes an earnest attempt at presenting a fresh story in this vein, but winds up without enough to say, and spends too much time meandering through minor would-be dramas.

The film focuses on two Los Angeles women in their late 20s, Sasha (Leighton Meester) and Paige (Gillian Jacobs of “Community”). We meet them in the midst of a long-term friendship defined by opposites: Paige is a stubborn, career-oriented environmental lawyer; Sasha is a drifting wannabe musician unhappily working as a receptionist. They’re both single, and although Paige is straight and Sasha is a lesbian, the film doesn’t use sexual orientation as a thematic jumping-off point. (Kate McKinnon of “Saturday Night Live” does show up as one of Sasha’s dates, which makes me want to Kickstart a Kate McKinnon-led comedy about anything.)

Paige and Sasha’s cloistered existence of “America’s Next Top Model” marathons and rosé is disrupted as Paige becomes involved with Tim (Adam Brody), a dermatologist fond of inappropriately jamming quotes from “The Big Lebowski” into casual conversation. Sasha’s insecurity rises as Paige and Tim grow closer, and she and Paige begin to come into conflict over each other’s future and their responsibilities to each other as friends as their thirties approach.

Although it’s ostensibly about both women, “Life Partners” is more interested in Sasha’s struggles to decide on what kind of life she’s happiest with. As Paige drifts away, the tide goes out on Sasha’s passive acceptance of her professional and romantic situations, which serve as dual drivers of most of the conflict in the film. This focus is something of a disappointment given the comparatively stronger performance by Jacobs, despite the fact she has little to work with. Paige becomes mostly defined in terms of her relationships with Sasha and Tim; not once do we see her at work, and her mother is only briefly introduced as a sounding board.

Beyond characterization, the film doesn’t convincingly answer why any of these people are so close with one another to begin with. What kept Sasha and Paige in such a close friendship despite their tremendous differences in personality? What attracts the driven and headstrong Paige to Tim and his offensive novelty t-shirts? Fogel isn’t interested in analyzing any of these points too closely, and so when sporadic mini-conflicts arise among the characters (shot in sudden shaky-handheld), they aren’t sufficiently underwritten with the narrative weight that would make them impactful.

The film shines, quite literally, with Matt Luem’s production design and Brian Burgoyne’s cinematography, presenting a colorful, cute and sun-drenched Los Angeles that’s bright and funky without being entirely cloying. There’s also a number of great, small moments of dialogue and delivery proving that Fogel and her co-writer, Joni Lefkowitz, have a decent capacity to write individual scenes or asides. There’s one terrifically unusual and borderline-horrific “romantic” gag; and while it suffers from diminishing returns, Paige and Sasha’s yell-at-each-other-in-traffic game is a clever calling card.

However, taken together as an entire film, scenes frequently feel disjointed or redundant (Paige correcting her mother on the pronunciation of “Nordstrom”), and Paige and Sasha’s respective journeys frequently feel as if they could be completely separate films. Possibly the worst offence in the screenplay is a bizarre subplot about Paige rear-ending her neighbor’s SUV, which doesn’t seem to have anything to do with the film’s direction until it slowly lurches toward a Lesson Moment for Paige.

Despite some decent work by Jacobs and a generally pleasant air, Susanna Fogel’s directorial debut doesn’t quite make the case for its necessity, with characterizations that are too thin and not nearly enough content to justify a 90-minute running time. Similar ground has been covered before with much more precision. Fogel may be one to watch after a few more features, but it might be more interesting to see if her themes of friendship and impending adulthood can be sharpened inside the constraints of short-form work.

Adam resides in Halifax, Nova Scotia, and enjoys running and trying to build a better veggie burger when he's not mainlining cinema. His preferred Peter Gabriel album is Peter Gabriel (Melt), and he dreams of someday buying a Eurail pass.
You might also like
Gillian Jacobs

by Josef Rodriguez on February 23, 2015
There are some laughs to be had, but Hot Tub Time Machine 2 is a wholly underwhelming experience, one that fails to live up to its predecessor on every conceivable level.
Comments
Leave a reply
Add Comment Register

END_OF_DOCUMENT_TOKEN_TO_BE_REPLACED
Taylor Sinople Picks: The 16 Best Films of 2016
Form and Function in Alex Ross Perry’s “Queen of Earth&...
Digging for Fire and Unexpected: Husband and Wife Process Parenthoo...
Every Thing Will Be Fine 3D Review