Reviews
7
0
previous article
A Fresh Look At: Divine Intervention (2002)
next article
New to The Criterion Collection: May 2014 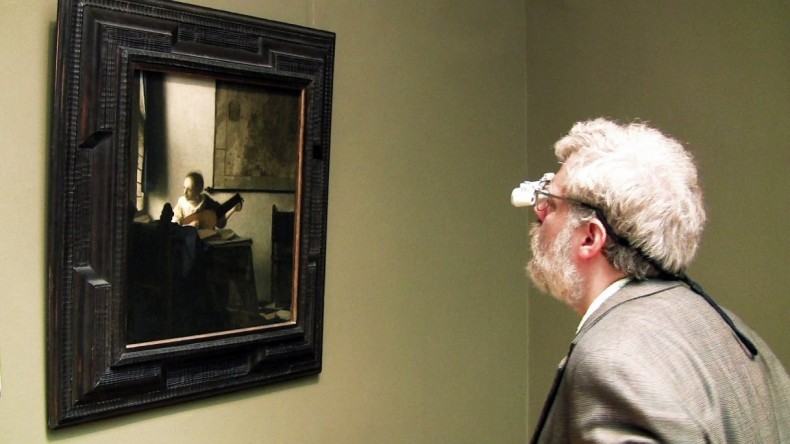 An art documentary without much to say about art, "Tim's Vermeer" plays like a glorified episode of “Mythbusters,” albeit one with an initially captivating premise.

When it comes to art, there is a fine line between deconstruction and destruction. The experiment at the heart of the documentary “Tim’s Vermeer” – an exploration of how works of art are created – is decidedly the former, but the film loses some intrigue by not dealing with questions of the latter.

Tim Jenison, the subject of the film, is a successful inventor, a specialist in optical technology, and a fan of the works of 1600’s Dutch artist Johannes Vermeer. This appreciation makes perfect sense given that Tim has built a career on manipulating light and color, and Vermeer is revered for incorporating those same elements into his painting with striking skill and precision. Based on controversial theorizing that Vermeer (and other master artists) may have used mechanical means to supplement his abilities, Tim decides to try and prove the plausibility of such claims.

Famed illusionists Penn & Teller narrate and direct this undertaking, respectively. They track Tim’s progress as he attempts to recreate The Music Lesson, one of Vermeer’s more involved pieces, from scratch – not a phrase that Tim takes lightly. Before the painting process can begin, he wants to ensure absolute authenticity in all areas of the experiment, including custom-built furniture and handcrafted glass lenses. It’s here that Teller, a first-time director, exposes his lack of experience behind the camera. Choppy editing, pointless digressions, and montage sequences that drag on start to chip away at the interest that the topic initially garnered.

The real issue with the film, though, is that it tries to be more movie than it has content for. Tim’s obsession with detail entertains for a while – one scene where he cuts his lathe in half because it is too small to shape a harpsichord leg in one piece grabs a laugh for it’s deadpan presentation – but eventually runs out of steam. Rather than mine the wealth of interesting discussion fodder available, the film is padded out with voice-over of Penn essentially answering his own questions about whether Tim’s process (and allegedly Vermeer’s) is “cheating” and what that means for art enthusiasts. It feels a bit like one of the duo’s magic shows, where Penn plays the mouthpiece to keep viewers from thinking about anything too seriously.

One of the major questions that the film asks is whether art can be rendered objectively. After successfully completing his painstaking reproduction, Tim’s response is a resounding yes. By watching, a more complicated answer becomes self-evident: yes it can, but it still takes an artist to make it special.

Zack is a software developer from Halifax, Nova Scotia moonlighting as a cinephile - until the weekend, when those roles reverse. He can often be found thoughtfully stroking his beard or thoughtfully stroking his cat. Despite remaining in the sitting position almost exclusively, he occasionally makes time to be bent into other shapes during jiu jitsu practice. You can aggresively shout your opinions and objections at him via Twitter or in person (anywhere beer is served).
You might also like
Fine Art

by Joanna Elena Batsakis on November 2, 2014
While much has yet to be written on Sofia Coppola’s film work academically, on a general critical level film discussion about the writer/director is limited to criticisms of gender and family Hollywood connections, which ultimately distracts the viewer from the original intertextual imagery of Coppola’s cinema. Through this essay “Sofia Coppola: Cine-poet,” I hope to […]

by Joanna Elena Batsakis on September 14, 2014
Three hung-over, disgruntled men walk out slowly into the bright sunlight from inside a grimy small-town police station. One dressed in leather pants and another in a fringed jacket with a crumpled blue necktie walk to their motorcycles. The other, a young lawyer dressed in a wrinkled, white summer suit, takes a swig from a […]
Comments
Leave a reply
Add Comment Register