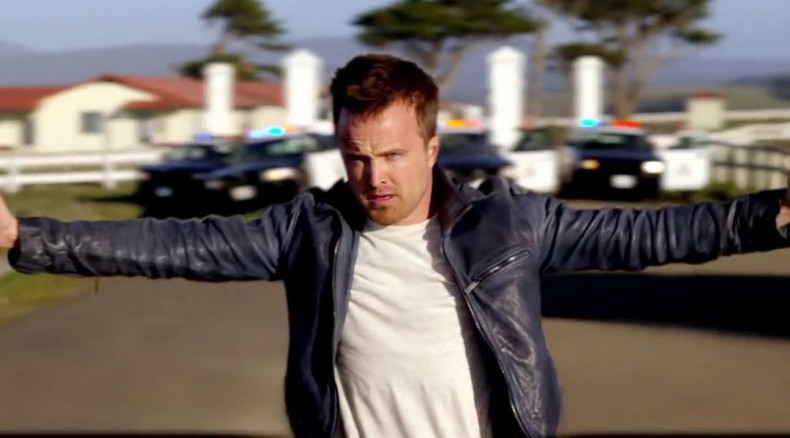 In “Need for Speed,” Aaron Paul adds human drama to the action, and director Scott Waugh sets a benchmark for modern race photography.

Muscle, sport, and super cars showdown in this videogame adaptation that doesn’t suck!

When a trend grows tired, you have two choices: invent the new or revive the old. Often they’re one in the same. When it comes to racing movies, the genre has been kicking out similar material for over a decade. Some incorporate action set-pieces like a heist, while others have welcomed drama. What we haven’t seen much of is the simplest approach of all: a throwback. Stop spending hundreds of millions to further desensitize us to spectacle with CGI-blowouts and get back to a time when the hood-mounted cameras racing through traffic in “The French Connection” blew us away because it was just so real. “Need for Speed” carries the unfortunate burden of being adapted from of a popular videogame franchise, but don’t condemn it yet. As a throwback to 60’s car-culture classics, it may be just what the genre needs.

No proper 60’s homage could start anywhere but at a drive-in theatre hangout, so that’s where we first meet Tobey Marshall (Aaron Paul) – a skilled driver that enters illegal street races on the weekends and spends his working hours struggling to keep his car shop running that he owns with a few friends (Rami Malek, Scott Mescudi). When a high-speed showdown ends in the death of a close friend, Tobey is framed for the accident by a highly respected driver with the comically game-y name of Dino Brewster (Dominic Cooper). After a stint in prison, Tobey returns with a fiery vengeance and sets his sights on defeating Dino at a legendary and exclusive underground racing event called the Daleon hosted annually. Tobey discovers the event is being held in just 45 hours in San Francisco (a nearly impossible distance to cover from his native New York) and, along with a Shelby Mustang acquired through past favors, an attractive navigator (Imogen Poots), and a few of his old buddies, races across the country to enter the competition and take down Dino.

Director Scott Waugh may be the son of hugely successful Hollywood stuntman Fred Waugh (“Heat,” “Raising Cain”), but he’s come into his own during a two-decade career in stunt work that lead to his 2012 directorial debut, “Act of Valor.” That Navy SEAL mission film prided itself on using active duty soldiers in authentic combat scenarios, and Waugh uses the same approach to bring a vitalizing realism to “Need for Speed.” Lead actor Aaron Paul (of “Breaking Bad” fame, but also in a great dramedy called “Smashed”) was trained extensively in the type of stunt driving usually professionals, and Paul’s skill behind the wheel allows Waugh to capture some impressive shots that keep Paul in full view, clearly driving.

The story content may be completely nonsensical (Tobey is apparently strapped for cash but has the resources of a small government tech agency), but Paul’s full-hearted performance opens a window to human drama that would stay closed had one of the typical deep-voiced, “jaw-line” guys filled the role. We don’t get the “bitch!” catch phrase, but Paul’s character will no doubt satisfy those craving more of Jesse Pinkman. The more you pull away from Paul, the more cracks in the production become visible. Co-star Scott Mescudi (better known as music artist Kid Cudi) is written into a corner as one of the more blatant recent examples of the “token black guy” in the comedy-action genre. Even Michael Keaton adds an annoying presence to the film as the eccentric organizer of the top-secret Deleon competition.

Most of the particulars to the drama are problematic, but that’s not where the meat of the experience sits. Every moment that the actors are placed into cars (which is for most of the film) is captured with rare glimpses of true realism that sets the benchmark for modern race photography. Cinematographer Shane Hurlbut straps go-pros all over the cars to create new and thrilling looks at 120-mph chaos. You just don’t need giant explosions and massive car-flipping wrecks when you have a simple POV shot of a car crash from the driver’s seat. The approach is so smart from Waugh, who’s working on a relatively low budget for the genre. Along with action-editor Paul Rubell, Waugh edited the film himself and adds to the awesomely real visual strategy by rejecting the contemporary pacing of action-shots. The average take length (the time a single shot stays on screen) in “Need for Speed” is much longer than others in similar films, meaning that every sequence plays out that much closer to reality. The slower edits hold your attention and allow you to comprehend what’s actually happening on-screen – proving to you the filmmakers have put the thought in to using their locations practically.

Everyone on board cares about cars: how they look, how they sound, and how they behave in all sorts of environments across the entire United States from rural backroads, to crowded highways, to dense urban streets. The director and actors are having so much fun with the process, and it comes as an uplifting break from the heaviness of most end-of-the-world scenarios we see being made within the action genre.

Interestingly enough, “Need for Speed” manages to do all of this and still remain true to the videogame experience it’s based on. Beyond the typical videogame narrative that includes campy themes of vengeance and a long and difficult quest, several sequences feel pulled straight out of the gaming franchise that has long-cornered the market on street racing gameplay. The interactions between the police and the racers feel identical to the rush of escaping the law with your own hands on the controller. Waugh, with integrity, mixes all the loud, dumb fun of a great game with the serious movie-business of a dramatic actor and realistic stunts. It’s not revolutionary, but it’s damn entertaining.

Taylor is a Chicago-based writer and aspiring film historian. He is the editor here at TFP, and has contributed to a number of international publications such as Cinema Scandinavia, PopMatters, and Room 101 Magazine. He can also be found listening to podcasts, researching topics he has little use for, or running after a city bus.
You might also like
Aaron PaulDakota JohnsonImogen PootsMichael Keaton

END_OF_DOCUMENT_TOKEN_TO_BE_REPLACED
Taylor Sinople Picks: The 16 Best Films of 2016
Form and Function in Alex Ross Perry’s “Queen of Earth&...
Digging for Fire and Unexpected: Husband and Wife Process Parenthoo...
Every Thing Will Be Fine 3D Review