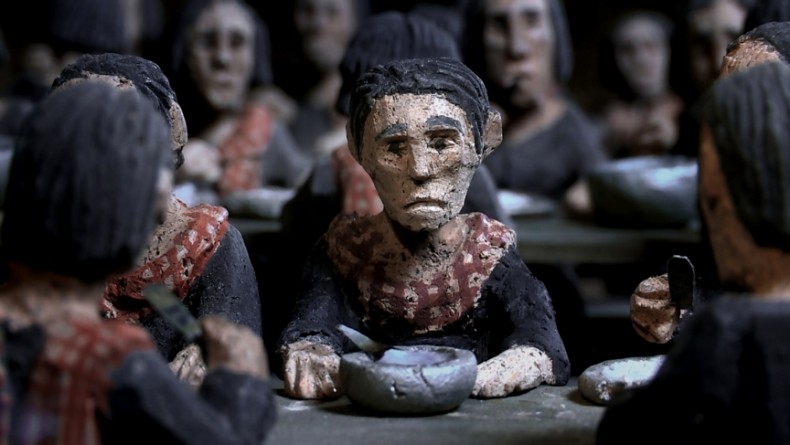 A recreated, personal revisit to the horrors of the Khmer Rouge regime through wood-carved figurines give both the filmmaker and the viewer closure in "The Missing Picture."

Past genocide in the Far East stormed into the limelight last year with Joshua Oppenheimer’s groundbreaking documentary feature “The Act of Killing,” but there was another great documentary to come out of Southeastern Asia in 2013. Just across Indochina, in Cambodia, Rithy Panh’s “The Missing Picture” won the Un Certain Regard prize at the Cannes Film Festival and was short-listed for Best Documentary at the Academy Awards.

What starts out as a personal journey of the director Panh’s early life under the Khmer Rouge regime turns out to be a reflection of the horrors of the Communist ideology in Cambodia. Since there is almost no known footage of the famine during that era, Panh uses hand-carved, wooden figurines to recreate the events — mixing it with propaganda footage that has remained from the Pol Pot days.

The driving force behind this film are the static figures who represent the story of the people that were moved from urban areas into the rural fields of Cambodia as working units in the new agrarian reform. Their story is constantly interrupted by the state-approved footage. Wood figures look static, immovable and lifeless just like those peoples’ hope and integrity. The only thing that moves is the camera, the apparatus.

The concept of the titular missing picture is very central to the film and it isn’t only because Khmer Rouge destroyed every tape that didn’t depict the country as prosperous and self-sustainable. It’s because, like Pol Pot said, “Those who we cannot re-educate, we will fight like enemies.” The film shows how the system tries to eradicate every single image of pre-revolution life by indoctrinating everyone with the importance of collectivism and other ideological principles.

“The Missing Picture” isn’t a documentary of factual storytelling and it doesn’t want to be. It attempts to revisit the haunting memories of Rithy Panh and implant them strongly in his and audience’s psyche so they never become a missing picture again.

To some extent this plays out as a disadvantage. The emotional hardships Rithy Panh has endured during Cambodian genocide is a very well known fact — almost all of his works are centered around this event and you can feel his strong emotions in the film blurring the need for another perspective, but it’s hard to find a different perspective in an event that wiped out 25% of its population.

Nevertheless, “The Missing Picture” has a very innovative approach in making the viewer engaged about an important historical event without acting as a historical documentary, but rather an emotional reflection on the individual pain of having no integrity in the spirit of collectivism. Sometimes this can feel a bit preachy but it is an essential view if you’re not familiar with the “accidents” of the Communist ideology.

Adil is a Telecommunications Engineer with a passion in Data Science, Soccer and Film. Once he found Terrence Malick, his film experience was never the same.
You might also like
documentarythe missing picture

by Maximilien Luc Proctor on November 16, 2014
An elegant inside-look at one of the most important events of the 21st century, "Citizenfour" is unmissable.

by Taylor Sinople on July 1, 2013
The sheer size of killer whale Tilikum (nearly 22-and-a-half feet long and weighing six tons) isn’t what makes him unique. The orca currently kept in captivity as a daily performer at SeaWorld Orlando, Florida has become notorious for another reason – bloodshed. While there have been no reported incidents of a killer whale attacking a […]

by Taylor Sinople on May 31, 2013
As stories are passed along, they become more and more filtered as they are warped and altered by those that share in its retelling. Subsequently, personal narratives are somewhat untrustworthy. People choose to remember the good times, or the bad. In Sarah Polley’s hyper-personal documentary, “Stories We Tell”, the inherent truthlessness of personal stories is […]
Comments
Leave a reply
Add Comment Register

END_OF_DOCUMENT_TOKEN_TO_BE_REPLACED
Taylor Sinople Picks: The 16 Best Films of 2016
Form and Function in Alex Ross Perry’s “Queen of Earth&...
Digging for Fire and Unexpected: Husband and Wife Process Parenthoo...
Every Thing Will Be Fine 3D Review