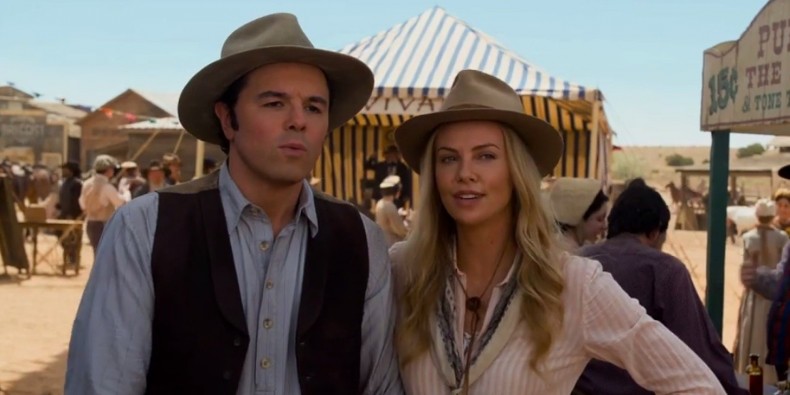 “A Million Ways to Die in the West” is overlong and veers into aimless territory more than a few times, but the stellar ensemble and consistently hilarious jokes help keep MacFarlane’s film from being crushed by its own ambition.

It’s easy to romanticize the West as we’ve seen it in countless John Wayne movies, but, according to Seth MacFarlane’s newest film, that’s only because we don’t have to actually live there. “A Million Ways to Die in the West” is, as its title suggests, an all out assault on the 19th century Frontier, a time in history that is otherwise portrayed as a simpler, better place where justice was served fairly and people weren’t constantly distracted by iPhones and TVs and e-readers.

Here, MacFarlane plays Albert Stark, a humble sheep farmer who seems to be the only man in town who hasn’t killed somebody. After backing out of a gunfight that was sure to end in his demise, Albert is dumped by his longtime girlfriend, Louise (Amanda Seyfried), for not being brave enough in the face of danger. A couple of weeks later, Albert meets Anna (Charlize Theron), a beautiful woman who has just moved to town with her brother, Lewis (Evan Jones). After saving her from a nasty bar fight, Albert and Anna bond when she begins teaching him to be a better gunslinger after Albert stupidly challenges Louise’s new boyfriend, Foy (Neil Patrick Harris), to a duel. During their time together, Albert and Anna fall in love, but what Albert doesn’t know is that Anna is married to Clinch Leatherwood (Liam Neeson), the deadliest gunslinger on the Frontier. Clinch hears of their relationship, and comes to town seeking his revenge, forcing Albert to unlock his potential as the courageous man he was meant to be.

Seth MacFarlane’s particular brand of humor is an acquired taste, and warming up to his heavily referential humor means having a fairly expansive knowledge of pop culture. At 116 minutes, “A Million Ways” is not as tightly edited as the director’s previous film, and it’s not quite as funny either, but it is a truly spot-on satire of the classic western, complete with its own novelization by MacFarlane himself. The film brilliantly tackles the largely ignored dangers of living on the Frontier, and MacFarlane, a self-proclaimed nerd, recognizes the lunacy that comes with living in the Wild West, milking it for every last ounce of comedy it’s worth. Thankfully, his well never comes close to running dry. Not every joke hits the mark, but the film remains consistently funny for two straight hours, with many of the pop culture references and cameos we’ve come to expect from the creator of “Family Guy,” but also with a wealth of perfectly executed satire that rivals the genius of Mel Brooks’ classic “Blazing Saddles.” Selling a Western to a 21st century audience is not easy (see: “The Lone Ranger”), but MacFarlane’s broad yet intelligent humor has the power to generate a cult classic, albeit one that will probably find an audience once it hits DVD.

In his first live action starring role, MacFarlane is mostly capable as a leading man, even if the performance isn’t extraordinary. He allows himself an opportunity to shine in the third act, but his greatest contribution to the film is his work on the script. MacFarlane has always been naturally adept at writing rich female characters, despite previous claims that he has absolutely no idea how to write from the perspective of the opposite sex, and his work with Charlize Theron is his strongest yet. To give credit where it’s due, Theron turns in an excellent performance that reminds us how charming and radiant she really is, but MacFarlane lays a foundation in the screenplay that affords Theron the ability to play Anna as one of the only fully drawn characters in the entire movie.

The film also features a cast of familiar faces including Giovanni Ribisi as Edward, Albert’s best friend, and Sarah Silverman as Ruth, Edward’s hooker girlfriend who refuses to have sex with him until marriage because they’re both Christians. Liam Neeson’s extended cameo as Clinch brings with it some decent chuckles, but I couldn’t help but recall Neeson’s far funnier appearance on Ricky Gervais’ “Life’s Too Short,” in which the Irish actor explains that he’s interested in doing more comedy films. It’s not Neeson’s fault that he isn’t very funny on-screen, but any laughs related to his character come more as a result of the actors surrounding him. Neeson’s recent rediscovery as a middle-aged action star has probably damaged his potential as a comedy juggernaut, but his tough guy schtick is getting a little tired, and I wish he would branch out a little more into other styles of acting.

The film’s biggest surprise, however, is Ralph Garman, a MacFarlane regular who also co-hosts the podcast “Hollywood Babble-On” with director Kevin Smith. Although he’s only featured for a couple of seconds throughout the film, his line delivery generates some of the film’s biggest laughs, and I’m convinced there’s an extended cut of the film that features Garman commenting something hilarious in every scene. His portrayal of a stunned townsperson is damn near the funniest thing in the movie, save for a cameo by a certain president that I wouldn’t dare spoil.

Being a fan of the John Wayne era of Westerns will definitely heighten the enjoyment of MacFarlane’s film, but what makes his work so enjoyable here is that you don’t necessarily have to get the jokes to laugh at them. MacFarlane knows how to inject enough absurdity into the proceedings to make sure none of the viewers feel left out, but also ensures that the more educated viewers don’t feel pandered to. As a result, none of MacFarlane’s performance or writing comes off as self-serving or snobbish. Instead, the writer-director-star strikes an almost perfect balance of laughing at and with the character from scene to scene. Many comedies tend to distance themselves from the audience, highlighting the outlandish behaviors of the characters, and the intended effect is often that the viewers will laugh at the incompetence of the folks on-screen. MacFarlane’s approach is radically different.

From a writer’s standpoint, MacFarlane has an innate ability to craft scenes that look like illustrations of hilarious conversations we have with our friends about the reality of our favorite westerns. From an actor’s standpoint, the character remains true to himself throughout the movie, and MacFarlane refrains from allowing Albert to undergo an unrealistic transformation, resulting in one of the director’s most personal works. By acknowledging his own nerdiness as a way to cope with the everyday struggles of life, it becomes apparent why MacFarlane casted himself in the lead role; the performance isn’t perfect, but no one could have played the role except him. Perhaps this explains some of MacFarlane’s indulgement in the editing department. Though, if you can make it past the film’s rough patches, what emerges is one of the most daring and hilarious comedies of the year, one that isn’t afraid to offend, surprise, or ponder the spiritual implications of kicking a condor directly in the testicles.

Josef Rodriguez is a writer, filmmaker, and musician living in New York City. He is often labeled as "that guy who didn't love Boyhood" and he finds himself liking Harmony Korine films more than he likes his own friends. When he's not stressing over turning in reviews on time, Josef can be seen playing guitar, watching "Spring Breakers," or trying to write the next great American movie.
You might also like
Amanda SeyfriedLiam NeesonNeil Patrick Harris

by Janneke Parrish on December 14, 2014
Mean Girls, unlike “fetch,” happened, and will continue to happen.
comments
Leave a reply
Add Comment Register

END_OF_DOCUMENT_TOKEN_TO_BE_REPLACED
Taylor Sinople Picks: The 16 Best Films of 2016
Form and Function in Alex Ross Perry’s “Queen of Earth&...
Digging for Fire and Unexpected: Husband and Wife Process Parenthoo...
Every Thing Will Be Fine 3D Review