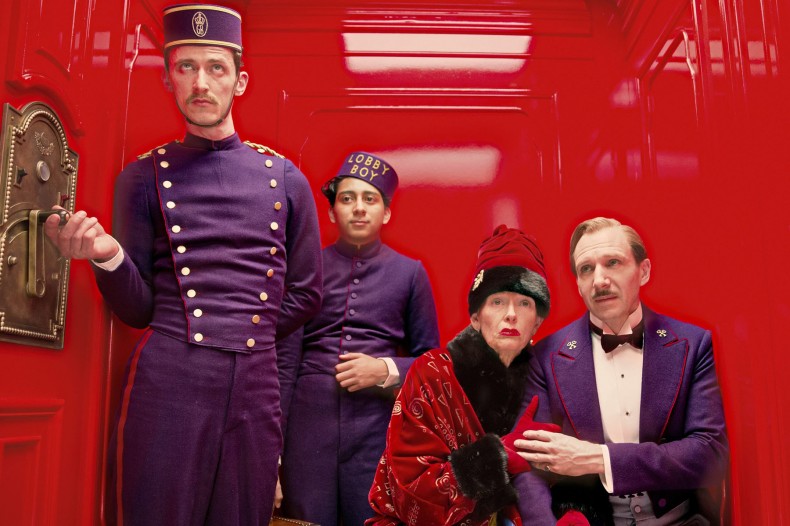 The funniest material Wes Anderson has written in years, “The Grand Budapest Hotel” is a masterwork of iconic aestheticism, even if it doesn’t quite manage to pack the emotional punch of the auteur’s best films.

Elaborate, symmetrical shots, pastel colors, and oh my god, the vintage costuming. If this, with a crazy look in your eye, is how you’d eagerly describe a Wes Anderson film to a non-believer (probably while shaking them by the shoulders and begging them to go straight home and watch “Rushmore”), then you’re going to be over the moon about “The Grand Budapest Hotel.” Anderson’s love for whimsy and nostalgia has, over the course of only a handful of films, become one of the most personal and recognizable aesthetics in the history of cinema. All of the attributes and quirky-bizarre style that drives the cult status of his catalogue are, in “The Grand Budapest,” at total fever pitch – it’s an Anderson epic.

Listen to a audio recording of a Q&A session with Wes Anderson at Chicago’s Music Box Theatre:

From the school grounds of the prestigious Rushmore Academy, to Camp Ivanhoe in “Moonrise Kingdom;” oceanographers and documentarians in “The Life Aquatic with Steve Zissou,” and a family of foxes led by “Fantastic Mr. Fox” – each new film in the Anderson universe feels part of a singular body of work that opens windows to the endearing dysfunctions of marginal, idiosyncratic communities. Themes of the family unit, bygone eras, and against-all-hope love are at work in all of these pictures, and a lesser filmmaker would have long ago fallen into replicating the successful quirkiness of past efforts. Anderson is more ambitious than that, creating his art anew, telling stories worth telling and adding emotional resonance behind the panache.

At The Grand Budapest Hotel, chivalrous concierge and superlative gentleman Monsieur Gustave (Ralph Fiennes) takes Zero (Tony Revolori), the new lobby boy, under his wing in the most honorable business of running a hotel in 1930s Europe. When the elderly Madame D. (an outrageously aged Tilda Swinton) drops dead of poisoning, M. Gustave, as her lover, is the prime suspect. Thrown in jail and robbed of the fortune left to him in Madame’s will, Zero is Gustave’s only hope to escape, prove his innocence, and return to his post at the Grand Budapest.

As anyone familiar with Wes Anderson’s work may suspect, there’s actually quite a bit more to it than that. There’s this framed layering of the story in which we’re actually viewing this whole thing through the lens of an author in 1985 recollecting a time in which he visited the Grand Budapest in 1968 where a man told him the story of M. Gustave in the 1930s. Seriously. These overindulgent structural flourishes are mostly inconsequential when it’s all said and done, but they do fall in line with Anderson’s breakneck, runaway-train writing style that packs more witty dialogue into this 100-minute film than you’d believe.

For the first time, Anderson holds the sole screenwriting credit (he typically co-writes with Owen Wilson, Roman Coppola, or Noah Baumbach) and the result is the most hilarious and purely “Wes Anderson” project yet. The rollercoaster-paced dialogue that has characters expelling paragraphs of monologue full of references and jokes in hushed whispers and urgent pleading is nearly impossible to absorb in the initial viewing. This is one to earn its place in your collection for home viewing for the simple pleasure of going back again and again to catch all the subtle nuances of the screenplay. Anderson is well aware of this effect, and even stages several shots that are too loaded with information to process on the first go-round – a character’s desk littered with notes and objects and trinkets, for example.

Fiennes, an accomplished English actor, is note-for-note pitch perfect as M. Gustave. Plucked out of the heavy drama of films such as “The Reader” and “Coriolanus,” Fiennes is dropped into the Grand Budapest and ends up owning the comedy in his loosest performance since he smashed a telephone to bits in “In Bruges.” The film is being promoted as a massive ensemble piece, but in truth the extended cast appears only briefly throughout the film with one or two lines each; it is Fiennes and Revolori (an 18-year-old first time actor) that stand at the center of the story.

Unlikely actors have appeared in Anderson’s films before – Bruce Willis, Edward Norton, Frances McDormand, George Clooney, and Meryl Streep. What a sign to the quality of direction behind these films that these actors don’t stand out, but are rather completely dissolved into the overall tone of the piece. We know Fiennes has total control over Anderson’s very particular brand of comedy when M. Gustave is awarded a priceless Renaissance painting in Madame D.’s will. He considers the worth of their several-decade long courtship while looking at the painting: “I’ll keep it above my bed forever…” he says to Zero, “actually, I think we’d better sell it.”

All of the trademarks are here – there is a stunning slow motion shot, and many more moments of exquisite perfection such as when Zero, wearing a baby blue uniform, drops into a truck bed brimming with light pink pastry boxes. But Gustave and Zero’s adventure also features some of Anderson’s most significant departures in years. Shocking (although still kitsch) moments of violence and sex enter briefly into the story, and several large sequences explore completely new territory. There’s a jailbreak scene, and a large-scale shootout.

The auteur’s touch over this fantastical story stretches through narrative and into the very format of presentation. While “Moonrise Kingdom” was shot on Super16mm film to add a grainier aesthetic, “The Grand Budapest Hotel” uses aspect ratio to capture each period of time in the many-layered story. Most of the film, the dominating portion that takes place in the 1930’s, is presented in the (sadly) outdated 1.375:1 Academy aspect ratio (4:3 square-image). Cinematographer Robert Yeoman uses the extra height that we slice off in today’s ultra-wide-screen formats to compose exciting, fresh shots that work so well with Anderson’s penchant for excessive symmetry. There’s a roughness to the photography that works so well in taking us into a new world. Each dolly move is not completely smooth, and some outdoor landscape sequences use what are clearly stop-motion animated miniatures. These little touches add a bit of weight to the nostalgic themes at the center of the story in which we see the Grand Budapest go from a historic and prized treasure in its glory days to a worn-down holdover from the communist era. As this world jumps forward in time, so does the technology. The most near present-day passages of the film are shot in an especially wide ratio at home with today’s action and thriller films.

As to how “The Grand Budapest Hotel” fits in to Anderson’s filmography, I’ve had the rare opportunity to reflect on the ways the film has connected with me. Critics generally must process their thoughts on a work of art fairly quickly, even same-day, but I’ve had a week to mull over this one and in that time I’ve lost a significant amount of the joy I felt immediately following the screening. The filmmaker that gave us the haunting near-suicide sequence in “The Royal Tenenbaums” set to Elliot Smith’s “Needle in the Hay” (one of my favorite movie moments of all time), today draws “The Grand Budapest Hotel” with more overtly bombastic glee, but less overall emotional resonance. Thinking back to my time in the Grand Budapest, it is the look of the production design and the movement of the camera that will live on more than the characters – the inverse reaction than I’ve had to Anderson’s best such as “Rushmore” and “Moonrise Kingdom.”

The line that marks density for density’s sake is definitely approached here. The grandiose style is full of captivating whimsy, to be sure, but it comes with a sense of overindulgence that was before suppressed by grounded characters and artifacts of the real world. In the Grand Budapest, the real world is some distant realm alluded to rather than connected with. So while it may not be the quintessential Wes Anderson film, “The Grand Budapest Hotel” is, like the hotel at the center of its story, a visually sumptuous creation filled with outlandish and eccentric characters that call back to the wistfulness of lost generations. We need filmmakers that can imagine (and actually capture) stories like this. Fans of the style will have a field day with this lady-killer concierge and his lobby boy that traverse a fictional country with a stolen painting – ducking Nazis and henchmen, contacting obscure, secret societies, breaking out of jail using tiny chisels snuck in inside pastries, and doing whatever it takes to protect the most grand hotel this fictional side of Europe.

Taylor is a Chicago-based writer and aspiring film historian. He is the editor here at TFP, and has contributed to a number of international publications such as Cinema Scandinavia, PopMatters, and Room 101 Magazine. He can also be found listening to podcasts, researching topics he has little use for, or running after a city bus.
You might also like
Edward NortonJeff GoldblumJude LawRalph Fiennes

Double Exposure: Birdman or (The Unexpected Virtue of Ignorance)

by Jordan Brooks on October 26, 2014
Editor’s note: Our “Double Exposure” reviews pit two or more critics against one another on the same film to hash out their differences in opinion. Agree with what we have to say or want to offer your own take? Leave it in the comments below. The Rundown Jordan Brooks Final Rating: 9.0 out of 10 Bottom Line: With […]
comments
Leave a reply
Add Comment Register

END_OF_DOCUMENT_TOKEN_TO_BE_REPLACED
Taylor Sinople Picks: The 16 Best Films of 2016
Form and Function in Alex Ross Perry’s “Queen of Earth&...
Digging for Fire and Unexpected: Husband and Wife Process Parenthoo...
Every Thing Will Be Fine 3D Review