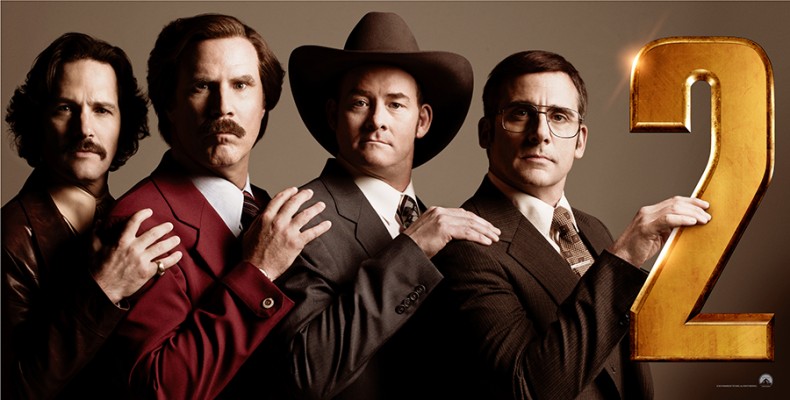 Barring a few storytelling pitfalls, “Anchorman 2: The Legend Continues” is the rare comedy sequel that manages numerous throwbacks to the original film while creating an overall funnier one in the process.

Sitting near the front of the theater with three hundred college students at a sold-out advanced screening of “Anchorman 2: The Legend Continues,” I thought to myself how convenient it will be to have a poll of an ideal audience’s reaction to the film. Now nearly a decade past the release of the original “Anchorman” – a film that kicked off a wave of comedies produced by previous SNL head writer Adam McKay and “Freaks and Geeks” helmer Judd Apatow – the existence of this comedy follow-up has been the source of great anticipation to the leagues of Ron Burgundy fans who have been demanding a sequel fiercely and often. Nine years later and writer-director Adam McKay brings his original comedy ensemble back together to reprise and, in many cases, top the characters, bits, and fantastical absurdity that made the “Anchorman” franchise a cult hit.

Rapid-fire jokes from Ferrell and comic co-stars Paul Rudd, Steve Carell, and David Koechner assaulted the audience and inspired more continuous, floor-shaking, miss-jokes-because-you’re-still-laughing-at-an-earlier-one cacophonous laughter than any screening I’ve been to this year. After all of this time, McKay is able to not only make Will Ferrell’s self-obsessed, dangerously inept 1980’s newscaster character fresh, but funnier, sharper, and more ludicrous than ever.

Picking up after the conclusion of the first film in which Ron Burgundy (Ferrell) overcomes his opposition to Veronica Corningstone (Christina Applegate), an independent female newscaster in an industry dominated by males, we meet Burgundy and Corningstone some time later while they are living happily ever after. When Corningstone is offered a promotion and Burgundy is fired by a network executive (the first of many shocking cameos), the couple split up. Burgundy, down on his luck, resorts to taking a job as an announcer at SeaWorld and even considers ending it all when he’s offered a job at GNN – a new kind of news network that intends on becoming the world’s first 24-hours-a-day news source. Burgundy accepts the offer and, you guessed it, it’s time to get the old team back together and take on America under the guidance of their new boss (Meagan Good) – which to Burgundy’s shock is both female AND black. Now relocating from their native San Diego to New York City, Ron, Brick (Steve Carrell), Brian (Paul Rudd), and Champ (David Koechner) are surprised to find they are no longer the big men on campus – that role is filled by an archetypal rich-kid bully: adored primetime newscaster Jack Lime (James Marsden).

McKay and co-writer Ferrell handle “Anchorman 2” in typical comedy sequel fashion – everything is bigger, ballsier, and (mostly) better. The film hits on countless scenes of increasing absurdity – one of the characters runs a chicken business that serves fried bats (“The chicken of the cave”), another lives in a light-house and nurses an injured shark back to life. And, of course, the whole gang gets in an epic, violent outdoor battle against rival newscasters. Beyond these imaginative, over-the-top bits, all of the “down time” is also packed with jokes. The laugh-per-minute ratio is off the charts; it’s an outrageously funny movie. Despite the current Apatowian climate of hard-R comedies, “Anchorman 2” actually manages a PG-13 rating that still feels adult and avoids superfluous crude territory.

The barrage of jokes comes from a variety of sources that keep the comedy always fresh and enjoyable. One-liners, physical comedy, and even the very edit of the film itself are used to gut-busting effect. McKay, known for his previous films “Talladega Nights: The Ballad of Ricky Bobby” and “Step Brothers,” thrives in reproducing his unrestrained brand of bizarre, completely off-kilter humor that elicits cries of “what?!” as often as actual laughter. This is also Ron Burgundy at his very most chauvinistic – with a tame example being his impatient questioning of his child’s nanny as she comes down the stairs later than expected, “Dammit Lupita, what have you been doing up there, eatin’ nachos?”

The core cast sees a shift in focus from the first film, with Paul Rudd and David Koechner being somewhat pushed to the side and receiving little screen time. Their loss is picked up by Steve Carrell’s dimwitted Brick character who receives a very welcome push into the spotlight. Brick becomes a more central character, and is even given a romantic subplot with his female counterpart – an empty-headed secretary played by Kristen Wiig.

As for Will Ferrell, he plays Burgundy with more confidence than ever, brilliantly avoiding becoming a caricature of the original character after so much time has passed. Ferrell’s delivery is as biting and unexpected as ever, and almost every scene in the film feels alive with improvisation. McKay states that around 25% of the material in the film was unwritten, and that they filmed so many variations of the dialogue that the Blu-ray edition of the film will feature an alternate cut with all new jokes.

Perhaps the most fun thing about viewing “Anchorman 2” will be the cameo reveals, of which there are at least a dozen. These quick features (just a line or two) are clearly designed for the huge audience experience. The crowd at my screening again and again let out collective screams of excitement as the camera pans to reveal unannounced celebrities from comedy, drama, and music. Don’t seek these out, they aren’t particularly funny on their own – it’s all in the surprise.

When you get down to the movie at hand, you’ll find nothing particularly special. This version of the 1980’s news world is less set in its period than the first film, and it takes a noticeable toll on believability. The most significant problem is with the exposition – the very beginning and ending of the film are by far the roughest, most disappointing parts. The opening forces an epic tone with narration from a deep-voiced male announcer and giant, “Star Wars” caliber title text, but these tones don’t mesh with the rest of the film. Some well-conceived narrative framing as we’ve seen in the likes of comedy masterpieces such as “Superbad” would have benefited this film greatly. There’s debate as to whether a comedy needs to have good drama at all, but the scene-setting stuff of “Anchorman 2” is of particularly low quality.

Something stronger is needed to tie the whole story together, but I can give it a pass because this thing is just so damn hilarious. After the screening, director Adam McKay came out to a lengthy standing ovation and took part in a Q&A that he interrupted to lead a round of “Happy Birthday” to one student and fulfill another’s request to autograph his bare chest. The response from the target audience was clear: fans will love “Anchorman 2” – they’ll take it home with them and probably not stop quoting it until the third film comes out.

END_OF_DOCUMENT_TOKEN_TO_BE_REPLACED
Taylor Sinople Picks: The 16 Best Films of 2016
Form and Function in Alex Ross Perry’s “Queen of Earth&...
Digging for Fire and Unexpected: Husband and Wife Process Parenthoo...
Every Thing Will Be Fine 3D Review